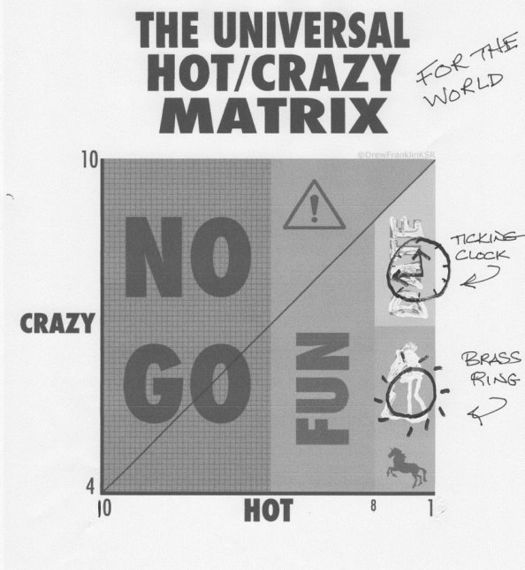 Two significant things happened recently. The first was that Life in the Boomer Lane learned that Britain had voted to leave the European Union. The second was that she realized that the post she published about Dana McClendon's Universal Hot/Crazy Matrix: A Man's Guide to Women back in 2014 had permanently remained her top post, eclipsing all of the other fabulous and amazing posts she had written since. Both of these events were a bit disturbing to LBL. Worse was her realization that the world is now stuck in its own hot/crazy matrix. As a public service, LBL now resurrects The Universal Hot/Crazy Matrix, this time for the entire planet.

The Universal Hot/Crazy Matrix for the entire planet can be used either when one is planning a summer vacation, or contemplating a permanent relocation outside of the U.S. in the event Donald Trump is elected.

Let us now explain the matrix. The horizontal line represents hot. This denotes the degree of impact from climate change. The vertical access represents crazy. This doesn't mean actual real crazy, it means political mayhem. It starts with four because there is no such thing as a place on the planet that is mayhem-free, except maybe little islands owned by really rich people, and that is way too expensive to consider vacationing at or moving to.

Last, you have your diagonal line, which all graphs and matrixes have so we put it in. Those of you who remember how to use graphs from school are in luck. The rest of you can bypass this post and find one to read that is easier to understand. LBL suggesst one about someone going to a flower show.

First off, look at the left half of the chart. This is a location that is experiencing the effects of both climate change and political upheaval at the same time. That combination wouldn't be a good choice for a vacation or a relocation. An example of this would be any ISIS-held stronghold.

The caution zone means a lot of political upheaval but minimal climate change impact. Have fun there, but be careful. An example would be El Chapo's secondary stronghold in Chile.
Below the caution area is your fun zone, locations that are OK on climate change and have minimal political upheaval. They are great, but not without some real concerns. This would be Pyogyang, North Korea or Uusikaarlepyy, Finland.

At the far right are the optimal locations to consider. At the top is a combination of minimal political upheaval and protected climate. While a winning combination, it is unlikely that you could actually live there. This would be Vatican City or a Disney cruise.

The next category down is the brass ring: very minimal political upheaval and minimally threatened climate. This is the location you want to seriously consider for a vacation or relocation. This would be The Principality of Liechtenstein.

Readers note: In the event Trump isn't elected, you still need a good vacation spot. Alaska is a good option, since climate change will turn it into Florida.