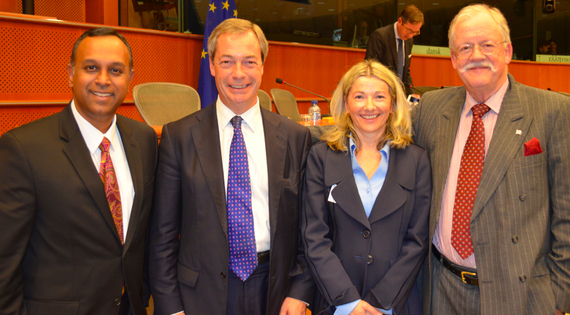 Happy Independence Day, United Kingdom! Scores of UK citizens and followers of the EU referendum in Europe and the US are congratulating Nigel Farage, Roger Helmer and the United Kingdom Independence Party's (UKIP) leadership for upholding the significance of sovereignty, the rule of law, individual liberty and economic freedom. For over twenty-five years, Nigel Farage and UKIP leaders have demonstrated a strong commitment to fanning the flames of liberty!

After all the noise, threats, doomsday scenarios and cataclysmic prognosis by political pundits and elitists, the only relevant argument in the BREXIT victory is the self-determination by the British people. British citizens decided to govern themselves and took pride in affirming the "consent of the governed." How noble and refreshing!

This is not the first time in history that people decided to be sovereign.

Americans fought for their independence from the British Empire 240 years ago. Taxation without representation did not seem right. Americans were threatened by war, there was a risk of civil unrest, and the British Empire's infiltrators did not make it any easier. Yet, Americans decided to sever their ties with the British Empire, no matter the cost. As Benjamin Franklin famously said, "Yes, we must indeed all hang together, or most assuredly we shall all hang separately."

It was Americans who prevailed in their desire to be sovereign, and they have prospered since. The founding fathers' 240-year old idea, expressed in the U.S. Declaration of Independence, "Governments are instituted among Men, deriving their just powers from the consent of the governed," is still valid today. Albeit, various US administrations and legislators have to be reminded of a bottom-up approach to governance - it is people who decide about their well-being through their elected representatives.

Thomas Jefferson who drafted the U.S. Declaration of Independence was inspired by the English Magna Carta, which established that every person, including the king was subject to the law, and was adopted 560 years earlier. The British legacy of liberty and the rule of law dates back 800 years!

The EU is not the first, artificially designed, top-down governing, supranational political entity, which keeps different ethnic groups together through a stick and carrot approach. It has been tried and it utterly failed in the 20th century.

The communist regimes of Soviet Union and Yugoslavia held different ethnic groups together by income and wealth redistribution among the republics, and by force - through a dictatorship. Instilling fear of a common foreign enemy and a risk of local collaborators encouraged submission. These omnipotent governments undermined religious liberty, thus eliminating natural rights to freedom and private property.

The commonality of these command-and-control authoritarian and artificially built regimes is the unaccountable governance, supranational redistribution of income and wealth, subjecting people toward government dependency, lack of freedom and instilling fear. Those on the top of these regimes including their supporters are also enriching themselves through this design. Therefore, the larger the top, the more difficult it becomes to dismantle it from within. UKIP's accomplishment in awakening UK citizens deserves great merit.

The global revolt against establishments and most things "big" stems from common developments and trends. It has nothing to do with nationalism, as some political pundits infer. It has all to do with patriotism and the significance of the "consent of the governed."

A natural, bottom-up governance by peoples who govern themselves for their own well-being is replaced by the artificial top-down governing by unelected, unaccountable and self-serving bureaucrats. A fear of foreign enemy instilled by communist regimes is replaced by instilling a fear of violent nationalism, financial markets, rating agencies and economic threats today.

Unaccountable governance by fear is thing of the past. The citizens of the UK understood that well and voted against big government, big banks, big businesses, big special interest groups that worked relentlessly to promote a well-funded scheme that became known as "project fear." 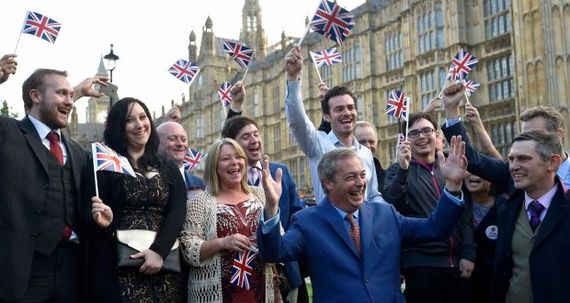 This may very well become the most important decision by and for British people. The citizens of the UK have a bright future ahead of them. Through tireless pioneering work, UKIP's leaders have shown the way which other EU countries, considering exiting the EU, can now follow.