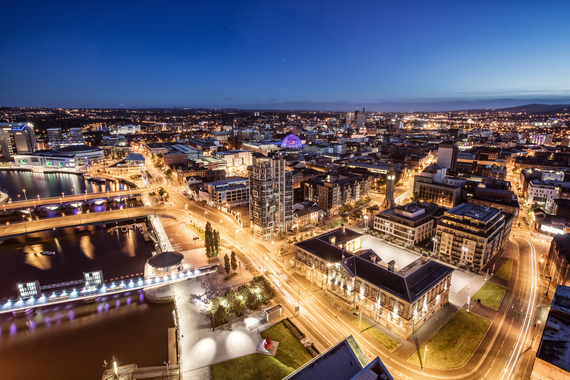 Since the Brexit referendum last summer, there has been no shortage of pundits pedaling an image of a Northern Ireland on the brink of economic calamity.

It's time to dispel some popular fiction with actual facts.

Northern Ireland has evolved dramatically over the past two decades into a modern, thriving region. Far from being the poor cousin of the UK, Northern Ireland is actually outperforming the other UK countries, including England, in many key performance indicators. Take exports - over the past 12 months Northern Ireland was the best-performing region in the UK with 6 percent growth versus overall UK export growth of just 0.2 percent. Since the EU referendum result, the softening of the sterling pound in relation to the USD and Euro has given a further boost to Northern Ireland with exports from the region surging in October at their fastest rate in 12 years.

Jobs data for Northern Ireland this year has also been very positive, with wages rising for the second consecutive year and the number of people in work finally returning to pre-financial crisis levels. With local jobs growth of 3.3 percent in the 12 months to September 2016, Northern Ireland paces well ahead of the UK average of just 1.3 percent over the same time period.

Then there's the fact that Belfast is experiencing a renaissance. The recent holiday season was the most lucrative ever for the local hotel trade with all weekend hotel occupancy being around 90 percent in Belfast in the months leading up to and right through Christmas. This boost was, in part, fuelled by the surge in visitors from the Republic of Ireland with one in three shoppers heading north to make their Christmas purchases. And there will be an additional 30 percent increase in hotel rooms available in Belfast by 2018.

Contrary to popular belief, the Brexit vote has not stopped the flow of foreign direct investment into the region either. Invest Northern Ireland has made an inward investment announcement every month since the referendum and the pipeline remains strong.

In fact, in 2016 there were 25 percent more investment announcements from international companies compared to 2015. This past year there were 18 new international companies that set up in Northern Ireland, nearly 40 percent increase from 2015. Of these half are U.S. headquartered. Most tellingly however, 12 of those announcements came after the referendum was held in June.

That growth can also be seen in office rentals with top-end office letting in Belfast increasing by 40 per cent during 2016. The latest end-of-year figures show some 435,000 sq ft of office space rented during the course of 2016 - up 36 per cent based on a five-year average. And 573,527 square feet of new office space will be completed by 2018.

The reason companies choose Northern Ireland is primarily for its highly skilled workforce and cost competitiveness. Skill sets at a value are the main drivers of investment in the region, not European market access.

This has been a deliberate tactic. Invest Northern Ireland has predominantly targeted cost center opportunities for high knowledge service sectors - mainly offshore service centers for U.S. or Great Britain-based parent operations - so for our foreign investors market access is generally not an issue.

Northern Ireland is a global leader in the knowledge economy

Belfast is also the number one destination city globally for financial services technology projects. This is no surprise given Northern Ireland has the highest percentage of qualified IT professionals in the UK and Ireland with more than 77 percent holding a degree level qualification - well ahead of the rest of the UK and Republic of Ireland.

This has led to the region emerging as a Legal Tech center with the UK's First Legal Innovation Centre to be launched at Ulster University later this month.

U.S. legal firms and companies are here conducting cutting-edge work. For example, Allen & Overy's global IT hub is located in Belfast and Baker & McKenzie's Global Merger Analysis Platform (GMAP) - a new antitrust and merger data control tool - is delivered from Belfast and used by the firm's team of anti-trust and competition lawyers world-wide.

Northern Ireland has been successful in these high knowledge sectors in part as a result of the region's approach to marrying education and innovation and Invest Northern Ireland's modus operandi of partnering with companies investing in the region for the entire duration of their project. It is no accident.

We believe the business environment in Northern Ireland is poised to get better as we gear up for the introduction of a new lower corporate tax rate of 12.5 percent - a commitment made by the Northern Ireland Executive - which, when combined with the region's other tax incentives, will make it the lowest anywhere in the G20.

This move serves to enhance an already very attractive tax environment which includes Patent Box Corporation Tax of 10 per cent, low personal taxation, low social welfare contributions, generous tax allowances, no local taxes on profits or surplus, R&D Tax relief up to 230 per cent and an extensive tax treaty network of over 135 treaties.

Crucially, this new rate of corporate tax is designed to create jobs in the local economy and therefore business must be conducted in the region in order to avail of the 12.5 percent rate. This new rate does not allow profit shifting, is fully BEPS-proof, and is only applicable to genuine economic activity.

Importantly, what it also means is that Northern Ireland can more aggressively target other sectors such as advanced engineering and manufacturing, health and life sciences where the region is already world leaders in niche areas. And, it also allows Invest Northern Ireland to target profit centers for the first time.

So, while the Bank of England has just sharply upgraded its economic growth forecasts, we acknowledge what happens in the coming months and years remains to be seen. Clearly, Brexit will pose challenges for all of UK and Europe, but it is high time people's opinion of Northern Ireland was based on facts and not fiction.