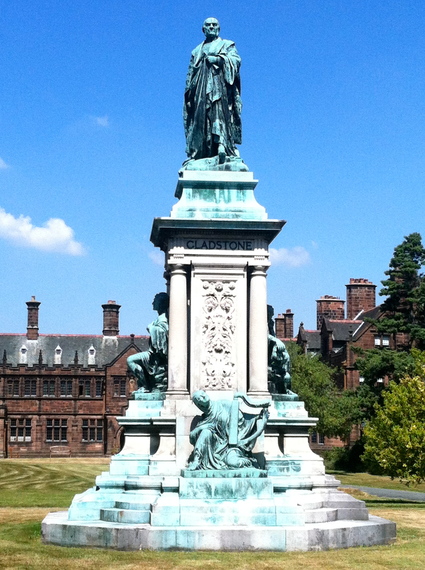 "Never forget that the purpose for which we live is our improvement, so that we may go out of this world having, in a great sphere or a small one, done some little good for our fellow creatures and labored a little to diminish the sin and sorrow that are in the world."
W. E. Gladstone

I write today from Gladstone's Library in Wales, the prime ministerial library established by and honoring William Ewart Gladstone, four-time Prime Minister, and England's greatest statesman. He was also a person deeply interested in religion and theology (before his father forbade it, he planned to become an Anglican priest), and, in fact, a lay reader in the small parish church behind me, St. Deiniol's.

The UK Mr. Gladstone loved and served is in turmoil ten days after the Brexit vote, with the pound hitting thirty-year lows against the dollar, construction and other infrastructure spending stalling, and the central bank warning that these are just the first signs of financial chaos that will shake the economies of Britain, Europe, and possibly the US.

This is not to mention the social instability brought on as tensions about immigration and Islam bubble to the surface. The Archbishop of Canterbury warns that the Brexit vote, driven to some extent by anti-immigrant sentiment, has exposed the cracks in the thin layer of civility in British life. Nor does this consider the stunning political instability resulting from the fall of David Cameron's government, widespread resignations in the Labour Party, and even the resignation of Nigel Farage, the face of the UKIP Party whose signature issue was the Brexit.

Martyn Percy, the Dean of Christ Church Oxford and one of Britain's leading theologians, said here at the Library that Brexit represents a stunning "failure of liberal values." What he meant by "liberal" is not what we tend to think in America, but what Mr. Gladstone meant, not liberal politics, per se, but liberality broadly defined: compassion for others, openhandedness, a willingness to see each other as human and to at least consider the needs and desires of others in our decision making. In contrast to the divisions that selfishness, fear, and nativism cause, liberal values make community possible. They allow people to look at differences in class, race, culture or creed not as threat, but as opportunity.

But, as sociologist Linda Woodhead told me on BBC Radio earlier this year, liberal values do not come naturally to human beings. They have to be cultivated, and it is hard to cultivate them without a willingness to listen to someone else. To call Brexit a failure of liberal values is to recognize that many Leave voters thought of little other than expressing their own anger or about holding onto something they personally feel is slipping away, whether that is economic power or national identity.

Our British cousins remind us that radical individualism--much more a part of our own American ethos--can't sustain communities. It is liberal values that make community possible, whether small ones like churches or civic groups, or huge ones such as nations. When everyone is out for him or herself, there is a tendency not to care about what policies will do to others. British grandmothers voting to leave the EU, for example, were not thinking about their grandchildren, who will have less opportunity to travel for education and fewer places they can easily travel to live and work. They will live much of their lives under a contracting economy that will make even everyday life more difficult.

Brexit can teach us some lessons. This failure of liberal values is also being acted out right now in the United States as we consider the widespread support for Donald Trump. Many analysts suggest that Trump supporters tend to be, like some of the Brexit "Leave" voters, people who have long felt angry, frightened, or marginalized. Zia Chaudry, a Muslim barrister, said at the Library this week that when people feel threatened, their liberalism tends to disappear. "Liberal values thrive where you find prosperity, peace, stability, security, and education," he said, and although he did not approve, he understood why this might be so. But the Wall Street Journal offered an additional and quite revealing explanation for Mr. Trump's success: Trump supporters tend to be people lacking in "social capital," or "social connectedness." They have a low awareness of the importance of others and a low desire to be connected to others.

Simply put, they are people who do not seem to understand liberal values.

The impulse to put ourselves first is human, but it prevents us from being fully human. The drive to exclude those who differ from us grows out of fear, and it is an ignoble failure to recognize that we are both Children of God. In the 19th Century, Mr. Gladstone said, in words that remain strangely apposite today, "Remember that the sanctity of life in the hill villages of Afghanistan, among the winter snows, are as inviolable in the eye of Almighty God as can be your own."

Gladstone's life and work still stand as a stirring reminder of liberal values. It was Mr. Gladstone who risked his reputation in Victorian England by (with his wife) rescuing women from prostitution. It was Mr. Gladstone who expressed a passionate concern for human rights throughout his long career, whether at home or far afield (a silver wreath, a memento from a grateful Bulgaria, sits across from me as I write). And it was Mr. Gladstone who endowed a library in a deprived section of North Wales with the intention that others have the use of the fabulous collection he had built up, some 32,000 books, many of which (although in his eighties!) he personally moved to the site in a wheelbarrow.

My time here at Mr. Gladstone's library has been instructive. In addition to re-engagement with the thoughts and words of Mr. Gladstone and informative conversations with scholars whose fields of enquiry give them insight on Brexit, on July 4 I sat in on a public program discussing faith and liberal values and why they are necessary for civic life. It was a perfect moment for such a conversation. Linda Woodhead talked about how healthy societies thrive on "creative conflict"--that is, the ability to engage in real debate, recognizing that others hold opinions with which we may disagree, and vice versa. But we are still called to live together. Martyn Percy called for a reemphasis on liberal values, the end result of which would be the realization that "there's space for all of us here to get on."

And I was reminded--and encouraged to go on believing--that people could be recalled to the belief that in sacrifice and service there is nobility and purpose, and that we can be more than tiny frightened creatures fumbling in the dark. Mr. Gladstone--naturally--said it well: "Be inspired with the belief that life is a great and noble calling, not a mean and groveling thing that we are meant to shuffle through as best we can, but an elevated and lofty destiny."

Many here look on the passing of Brexit as a tragedy, but there is still something for us to learn from it: We are called to something better, and our life is bound up with each other.