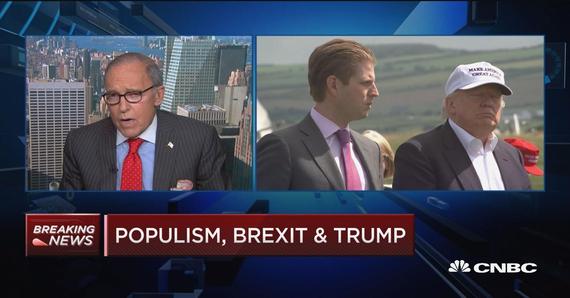 If populism wasn't already the political buzzword of the 21st-century before the Brexit vote in the United Kingdom (UK) and the rise of Trump in the United States (U.S.), it surely is now. Media stories about populism have been proliferating at an exponential rate, as have populism "experts". Everything is populism and everyone is a populism expert.

But while populism is an important concept to understand contemporary politics in many democracies around the world, it tells only part of the story. This is because populism is a so-called "thin" ideology, which is almost always combined with one or more other ideologies when political actors are successful. Moreover, the success of populist actors, like all political actors, is dependent upon the cultural and political system they operate in (and rarely have helped shape before they became successful).

I'll illustrate both points on the basis of two of the most striking political developments in western democracies of this year, the Brexit vote and the rise of Trump, which have become the prime examples of successful populism in much recent reporting.

There is no doubt that populism - a thin-centered ideology that considers society to be ultimately separated into two homogeneous and antagonistic groups, 'the pure people' and 'the corrupt elite', and which argues that politics should be an expression of the volonté general (general will) of the people - has played an important role in the success of both Brexit and Trump. Both campaigns attack(ed) "the corrupt elite" for stifling "the people" and betraying the "general will" (or "silent majority") - although Trump himself is more elitist than populist. But that is only part of the story.

At the core of the Brexit campaign was nationalism, i.e. the idea that the British people should be sovereign in their own country. Nationalism was what combined all forces within the Leave camp, from establishment Tories to anti-establishment Kippers (members of the United Kingdom Independence Party, UKIP). On top of that, xenophobia towards both East Europeans and non-Europeans (mostly Muslims) was instrumental in pushing the Leave camp to a majority. In other words, nativism - i.e. xenophobic nationalism - was at least as important as populism.

This is even more the case for Trump, who emerged victorious in the primaries within a deep field of populists. Particularly at his early rallies audiences would be near-comatose as Trump would rattle off his own achievements (e.g. selling condos to the Chinese), get only slightly excited when he would attack the political establishment ("the Washington elite"), but get really rowdy when he would go after the Mexicans and the Muslims. And although nativism is certainly not limited to Trump within the Republican Party, it has been the core of his campaign from the beginning - in fact, even before that, as he entered the national political debate as the most ferocious voice of Birtherism.

While Brexit (and Trump) was not just about populism, but a specific form a right-wing populism (which I call the populist radical right), it was also a highly complex phenomenon, which has some similarities, but also important differences, with populist radical right parties in Europe. Crucially, the UK referendum followed a majoritarian logic, in which voters only had two options: Leave and Remain.

This limited choice brought together broad alliances of people who were pro- and anti-EU membership. For example, the Leave camp included civic nationalists, open to multiculturalism but hostile to limited sovereignty, nativists, against both immigrants and the EU, and neoliberals, who believe the EU stifles the free market with its bureaucracy and social legislation - as well as a smaller group of radical left voters, who fundamentally oppose the EU as a neoliberal project.

The electorate that will vote for Trump on November 8 is not the same as the one that has voted for him in the primaries. It will not only be much bigger, but it will also be much more diverse. The real Trump electorate, i.e. the people who truly support Trump - not just over Hillary Clinton but over anyone, including other Republicans - lays somewhere in between the Trump electorate in the Republican primaries and his electorate in the presidential election - though much closer to the former than the latter.

Only a small and selective portion of Republicans vote in the primaries, irrespective of the candidates. But in the presidential elections, many people will vote for Trump out of party loyalty or out of disdain for Hillary Clinton (or because of both). They would prefer to vote for a non-radical right Republican candidate, such as John Kasich or Marco Rubio, but they don't have that choice. Voters in Europe do, because they can vote for a conservative or a neoliberal party without "wasting" their vote - as most countries use some form of proportional representation that also gives parliamentary representation to smaller parties.

The exception is the two-round presidential election that countries like Austria (next month) and France (next year) use. Here the first round works a bit similar to the primary process in the US, i.e. selecting the most popular left and right candidate for the run-off. Hence, the primaries electorate of Trump is more similar to the first-round electorates of Norbert Hofer and Marine Le Pen, while his presidential electorate is more similar to the second-round electorates of Hofer and, though to a lesser extent, Le Pen. The latter combine the core populist radical right support - i.e. which populist radical right parties would attract in elections with a proportional system - with a more diverse electorate that simply votes against the other candidate.

(4) Brexit and Trump are about the mainstreaming of populist radical right politics (or the radicalization of mainstream politics).

This merger of mainstream right and populist radical right is almost complete in some East Central European countries, like Hungary and Poland, where formerly conservative politicians now openly voice populist radical right ideas while remaining comfortably within their mainstream right political groups within the European Union. But it is also affecting several established right-wing parties and politicians in Western Europe, as can be seen in the recent statements by former French president, and 2017 presidential hopeful, Nicolas Sarkozy as well as by various leaders of the Christian Social Union (CSU) in Germany and the Conservative Party in the UK.

In short, both populism and the usual populist suspect show only part of the current illiberal challenge to liberal democracy. There is a reason that radical right populists are much more successful than left-wing populists and that reason is nativism! Consequently, (radical right) populist actors will not disappear once the economic crisis is finally over, or even when the recent economic inequality has been undone - as several new populist experts are claiming.