When House of Cards returns February 27 for Season 3, I won't be in it. Not that I didn't try.

My big chance came last summer, when I spied an ad for extras and day players, who might have a tiny role just for a day. Hopefuls of all ages, shapes and sizes were invited to trot out their "best Washington political look", along with a photo of themselves in their fanciest threads.

I hadn't tried out for a production since high school. And though I once worked as a journalist in D.C., I wasn't exactly the D.C. type. Which is to say I never owned a strand of pearls. And I'd never be mistaken for Robin Wright under any circumstances.

Plus, I was never the starstruck type. I'd been around too many for too long.

So why was I tearing through my sorry wardrobe looking for anything that could remotely pass for a power outfit?

OK, I lied. I wanted to get as close as possible to Kevin Spacey and his villainous alter ego in House of Cards, Frank Underwood.

I've always adored Spacey. He hooks you in, and has so much fun doing it. The brilliant choice to head up the American version of the original British series, and make it just as compelling.

I'm such a junkie, I've been watching Spacey's House of Cards spoof at the 2013 White House Correspondents' Dinner for a quick hit, waiting for the real thing to return.

Anyway, the casting call was about an hour away in Maryland. Of course I knew it was a silly waste of a great summer afternoon. But I was heartened by the friendly call for all types and thought it might be fun. 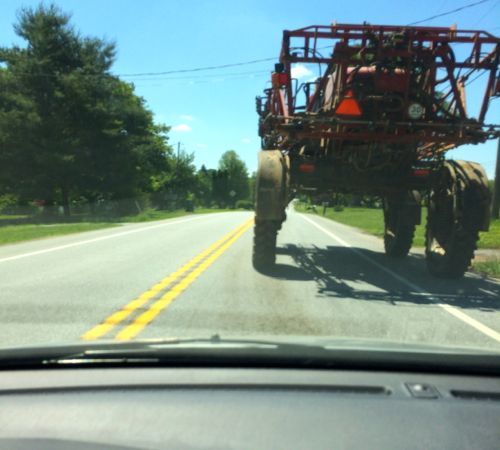 I didn't bargain on all the pokey traffic on the country roads of Pennsylvania. Didn't these Saturday drivers know I had an audition to catch? I started seething, thinking of Frank Underwood. We all know what he'd do about this kind of annoyance. 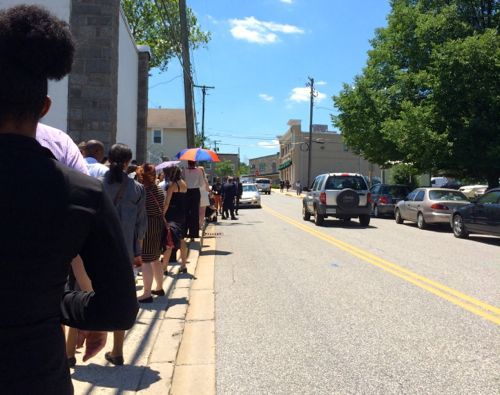 The casting call was at an armory. I got there just before noon, thinking I'd have plenty of time because it ended at 2 p.m. I didn't need my GPS to tell me I was in the right place. The line began at the entrance to the building and didn't stop. 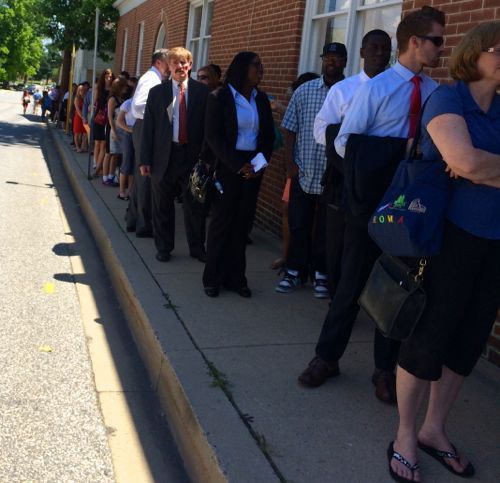 The reality hit with as much force as the summer sun. The line wasn't moving. The audition would be over before we ever had a chance to get there. 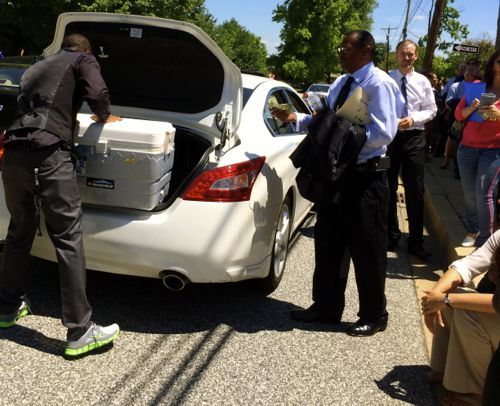 An enterprising sort was making money off our misery, selling bottled water from his vehicle. Frank would approve. 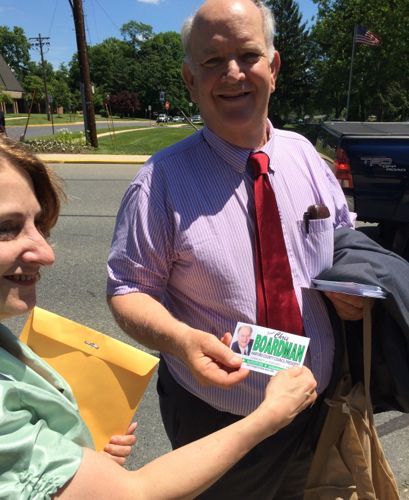 I kidded with a real area politico running for office who was trying to mingle. Guess he figured somebody in the crowd had to be local and might vote for him. Frank would have applauded that chutzpah.

OK, that was fun. What now? The line still hadn't budged. 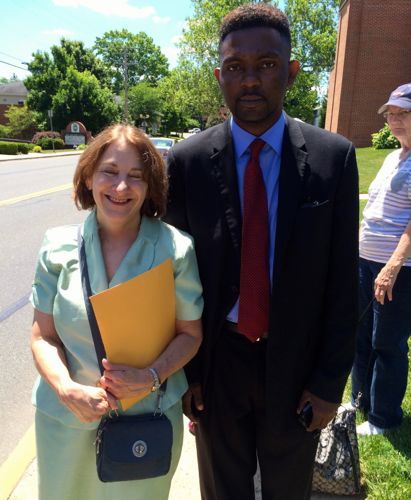 But what I heard from Charles, the polite, soft-spoken guy next to me in line, was pretty encouraging. This aspiring actor told me he'd actually been a stand-in for Mahershala Ali, who plays Remy Danton. (Frank's former staffer, who's anything but polite and soft-spoken.)

Charles said the gig only lasted one day, but Ali thanked him for his efforts. And when he and some others were talking about acting, Spacey, the man himself, chimed in a bit, talking about some of his theater experiences.

But even though he was apparently already a known quantity, he still had to stand in that line and interview all over again? Yep.

The crowd was a mix of people like him who'd done this kind of thing many times. They went from casting call to casting call. Some were getting walk-ons or bit parts in shows on cable networks like the USA Network. Stuff I hadn't heard of. 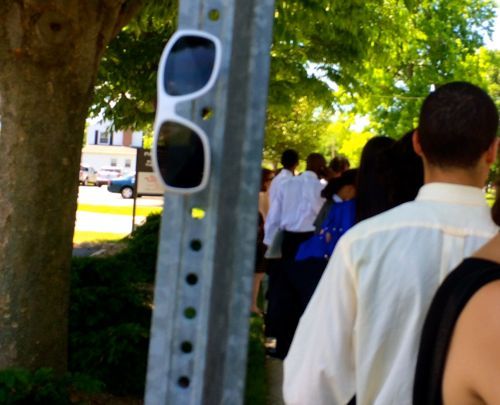 Unlike Charles, who spoke about House of Cards reverently, many knew nothing about the show. Had never seen it. Were just there for the gig. Others were like me, fans, with zero professional experience.

One guy told of a circuitous tie with someone high up in the crew. His connections weren't enough to move him to the front of the line, either. He and his friends bailed fairly early. They'd had it.

The advertised end of the casting call was nearing, but we still weren't any closer to the armory. Thankfully, an extras wrangler emerged and said everyone in line would get an interview. 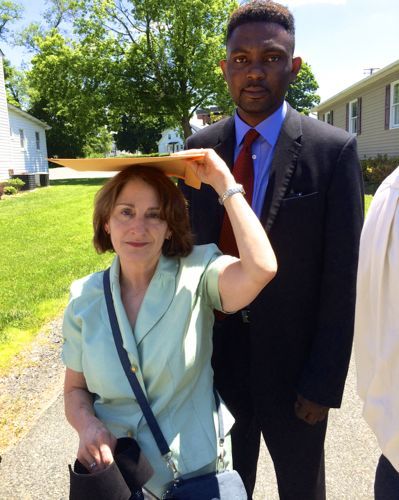 The heat and my heels were getting to me, so I took them off while we waited. Charles, Remy's former stand-in, was kind enough to get me some bottled water from somewhere down the block. 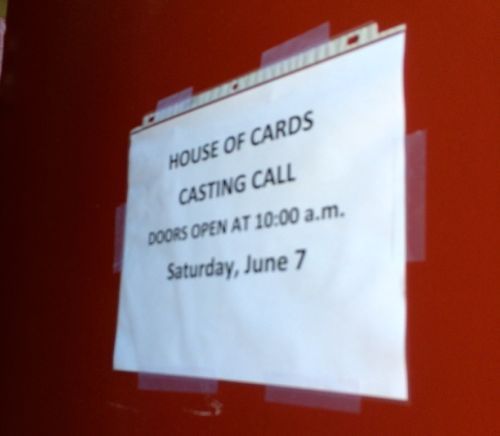 Hours later, we finally made it into the armory. And onto another line to actually talk to one of the casting people. 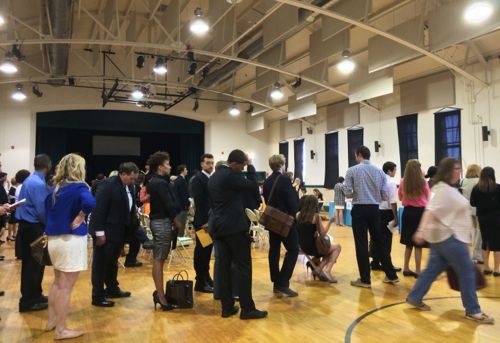 That's when I finally got serious. I had nothing rehearsed since I'd had absolutely no expectations.

So what do you do when it's your big moment and you've got nothing? The casting person and I made eye contact and I said, "I was thinking maybe I could play an ambassador from some exotic country." Her response was a smile that wasn't anywhere near as big as mine.

At last it was over. What a relief.