EDIT: This morning, Governor Sandoval announced he has no interest in being nominated to the Supreme Court. If you're curious about what would have happened in the parallel universe where this didn't happen, read on:

A little over a month ago, I stood in the boarding line at the Las Vegas airport and saw Nevada's governor, Brian Sandoval. I grew up in Reno, and had met Sandoval in high school, so I figured I would go shake hands and say hello. Though my politics don't line up with Sandoval on most issues, I had always respected him for his moderate and unifying approach to governing. We talked for a few minutes, and then parted ways.

Perhaps I should have stayed in touch. 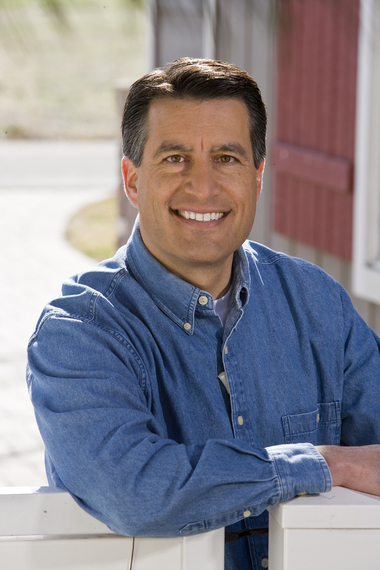 According to news broken by the Washington Post, Sandoval is among the candidates being considered by President Obama to replace the vacant seat created by the sudden death of Justice Antonin Scalia. Sandoval, who served for two years as Nevada's attorney general before becoming a federal district judge for just under four years, is widely considered to be the most conservative option on Obama's short list.

Sandoval is certainly not the only nominee being considered by Obama, but quizzically, his is the only name who has been definitively linked (according to the Post, by "two people familiar with the selection process") with the search to replace Scalia. There is more to this than meets the eye. That Sandoval's name in particular has appeared in the press, at the same time top Senate Republicans like Majority Leader Mitch McConnell (R-KY), Majority Whip John Cornyn (R-TX), and Judiciary Committee chairman Chuck Grassley (R-IA) have said they will not even hold hearings on any nomination, is not a fluke.

Per the Washington Post, "It is unclear how many potential nominees are under White House consideration for the high court vacancy left by Scalia. Obama was seen last week carrying a thick binder of materials on potential picks to review."

Floating a candidate now, just eleven days after Scalia's death, is historically early for Obama. As I wrote last week, Obama took a month to nominate Justice Elena Kagan after Justice John Paul Stevens announced his retirement, and he took 26 days to nominate Justice Sotomayor after Justice David Souter's retirement plans leaked to the media. But neither of them died mid-term, and neither of them stepped down in an election year, which may explain the rush now.

First, fill the Scalia seat by getting a nominee confirmed. The stakes could not be higher: the appointment could flip the Supreme Court's ideological balance for decades. Second, gain as much political benefit as possible and exact as heavy a political toll as possible on Republicans, particularly in the presidential election.

A Sandoval nomination certainly satisfies the second objective. For Republican senators to reject one of the most popular Republican governors in the country, and a Latino to boot, all under the shadow of a presidential election, could be potentially catastrophic with the moderate electorate.

Strangely, nominating Sandoval makes less sense from the perspective of the first objective, "flipping the court's ideological balance for decades."

"He's obviously no Scalia, but he could be a risky choice from a liberal perspective," Bob Shrum, a veteran Democratic political consultant, told me. "While he could be pro-choice and pro-gay marriage, he might not necessarily think they are Constitutional rights." Critics on the left have also raised eyebrows over his friendly attitude for big business and anti-public union stances.

So why is Sandoval's name the only one to be thus far confirmed on the shortlist?

I suspect it is because Obama purposely leaked Sandoval's name to test the waters of GOP obstruction in the Senate. While Sandoval is by no means the only person being vetted, he is probably the most conservative candidate Obama is considering. In this instance, leaking Sandoval's name makes sense for two reasons.

First, if Sandoval's name gets support, at least to the extent necessary to get Senate republicans off of their "we will not consider anyone" perch, Obama will leak a few more names and nominate a more liberal choice, knowing he has Sandoval as a backup plan. As it stands, that's unlikely. On Tuesday, McConnell said "no action" would be taken on a nomination, and added that Scalia's replacement "will be determined by whoever wins the presidency in the fall."

If blowback continues and it becomes clear Republicans will not even consider Sandoval (which would be asinine - since 1875, every Supreme Court nominee has received a hearing or a vote), Obama should nominate Sandoval anyways, compromise on a moderate nominee, and avoid the risk that a Republican president fills the seat instead. Sandoval is clearly qualified - a former attorney general, federal judge, and now governor - and Republicans would look awful, especially to Latino voters, for not even paying lip service to Sandoval, who is of Mexican descent.

But here's another juicy thought to chew on, certainly at the outer bounds of conspiracy, but one that I am sure has crossed a few folk's minds: In leaking Sandoval's name, Obama has potentially (and to an extent, already has) caused major confrontation between Senate Republicans and the man who many think would be a stellar vice presidential pick for a moderate Republican candidate like Marco Rubio. Coincidence?