I am exhausted by the "noise" from my car radio. CNN, MSNBC, NPR, FOX... nothing but chatter about last week's debates, speeches and discussions by our two presidential candidates. Everyone predicting who's right, who's wrong and who's going to win. I think by now we are over-loaded with opinions and maybe we're ready for a break. Well, yesterday I had that break! It was a moment of unadulterated political delight. I was invited to preview artist Brian Tolle's exhibition Commander In Chief at CRG Gallery (October 11 - November 12, 2012).


Brian Tolle takes our most significant "memories" of a collection of past presidents, distills them and incorporates them into an eclectic, irreverent, smart, funny and thought-provoking collection of "busts" of our "fearless leaders," using their place in history as the title of each piece.

"No.1" George Washington is two individual works, each a clear acrylic classical presidential bust. One head is chock-a-block with his first long inaugural address (the longest in history) and the other with his second, the shortest inaugural address in history. The mouths of both heads spew the addresses using alphabet beads that look like teeth. Remember, he was known for his poor dentistry. 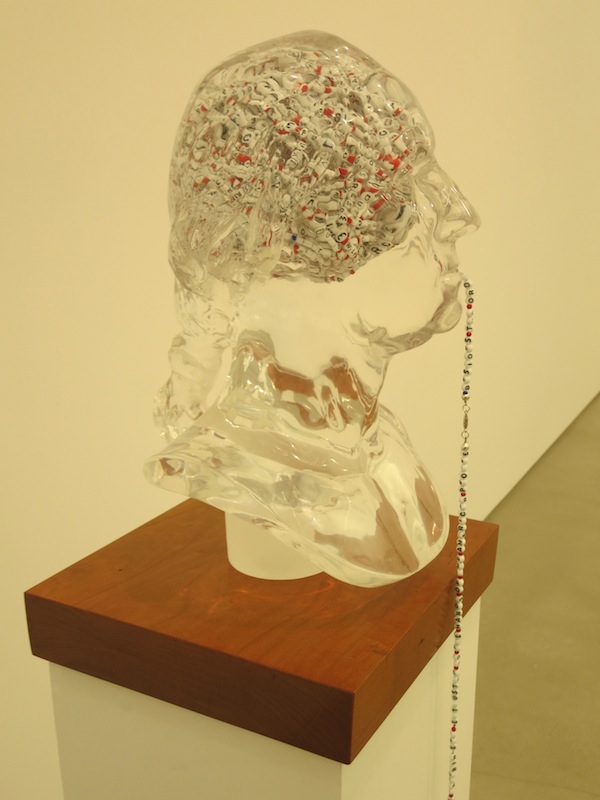 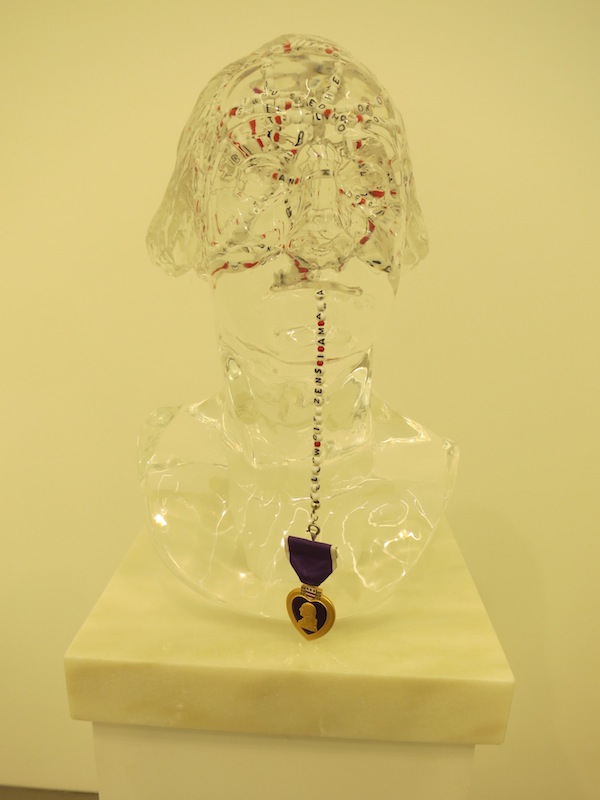 'No. 3" Thomas Jefferson's "portrait" is as portable as the traveling desk he invented, and on which he wrote the Declaration of Independence. In Tolle's sculpture, Jefferson's face looks up from inside a molded brown acrylic version of this desk. 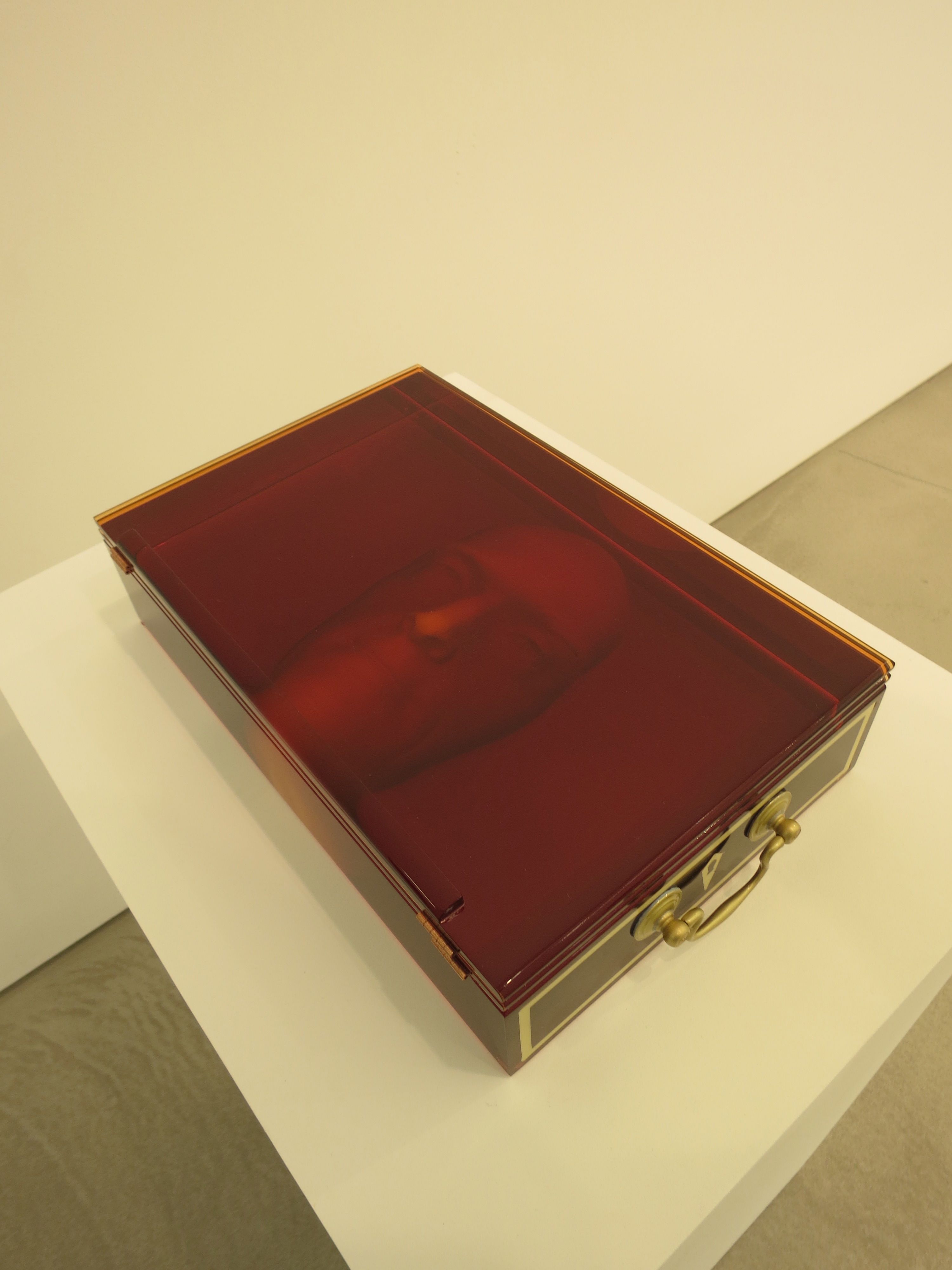 "No. 16" Abraham Lincoln is a white porcelain bust resting on a faux-granite log. His inaugural speeches shoot from his eyes in red, white and blue ribbons. When he was assassinated, Lincoln was shot at such close range that his eyes popped out of their sockets. 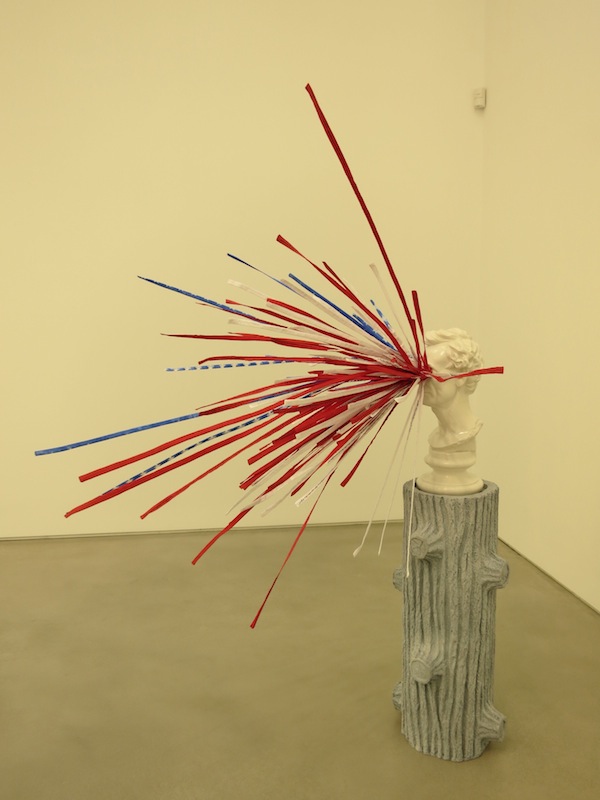 "No. 34" Dwight D. Eisenhower's bust is split in half, creating bookends surrounding a first edition collection of books of his speeches and writings, including his "Bookend Speeches." 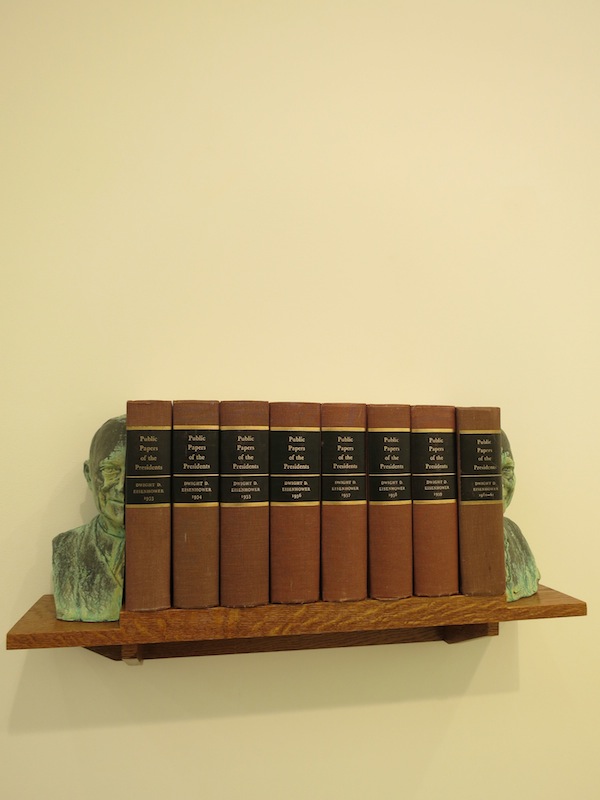 "No. 35" John F. Kennedy's shiny nickel-plated head stands on a series of Sputnik-like legs -- a reference to his "space-race" with the Soviet Union. 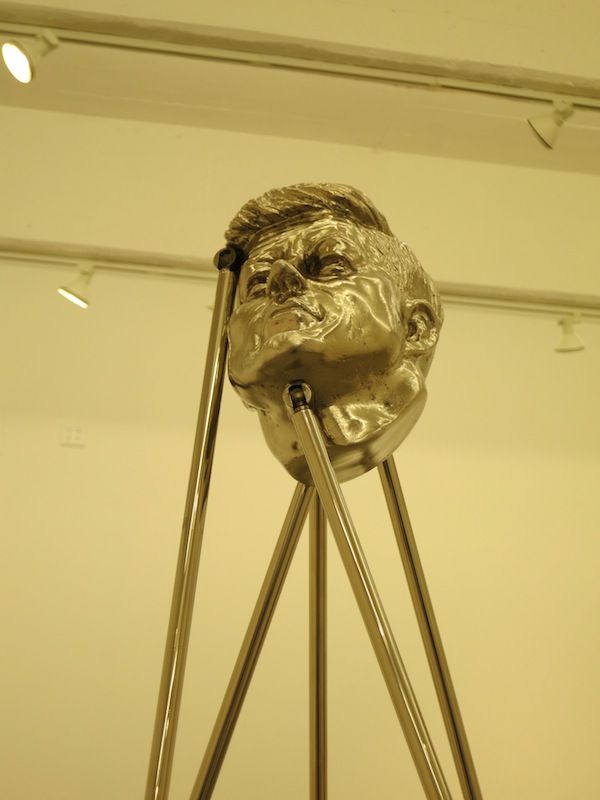 "No. 37" Richard Nixon's "bust" is the classic Halloween latex "Tricky Dick" caricature mask, complete with oversized nose. He's resting on a tape recorder and spewing enormous amounts of used tape. The recorder and tape are the same make and vintage as the one originally used to erase the Watergate Tapes. 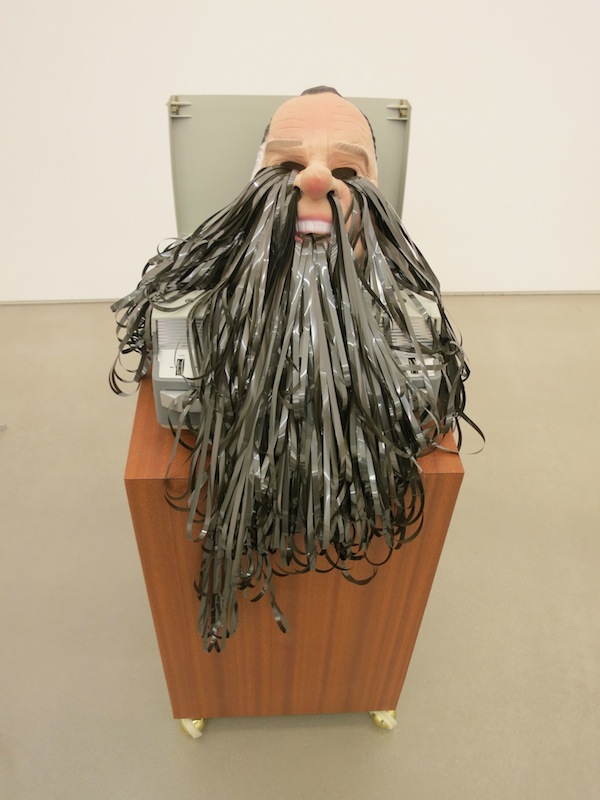 "No. 40" Ronald Reagan's head is a comical acrylic candy jar filled with jelly beans. This president is remembered for always having a bowl of Jelly Bellies on his desk, and offering them to everyone who visited the Oval Office. 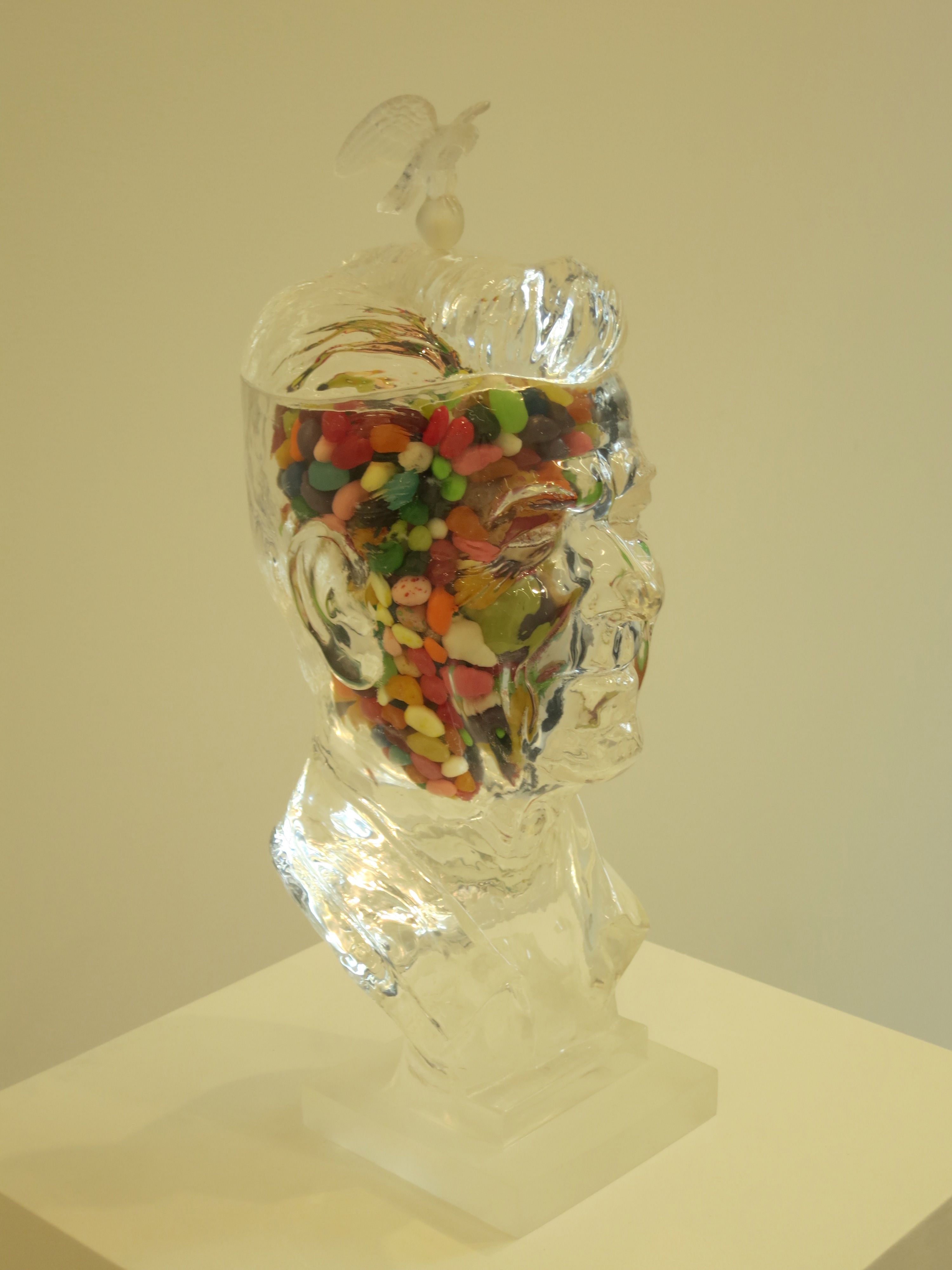 "No. 44" Barack Obama's "coif" is a quirky collection of figurines of all the presidents that preceded him. It is impossible not to see that every figure is white and several other irreverent issues brought up by the artist. 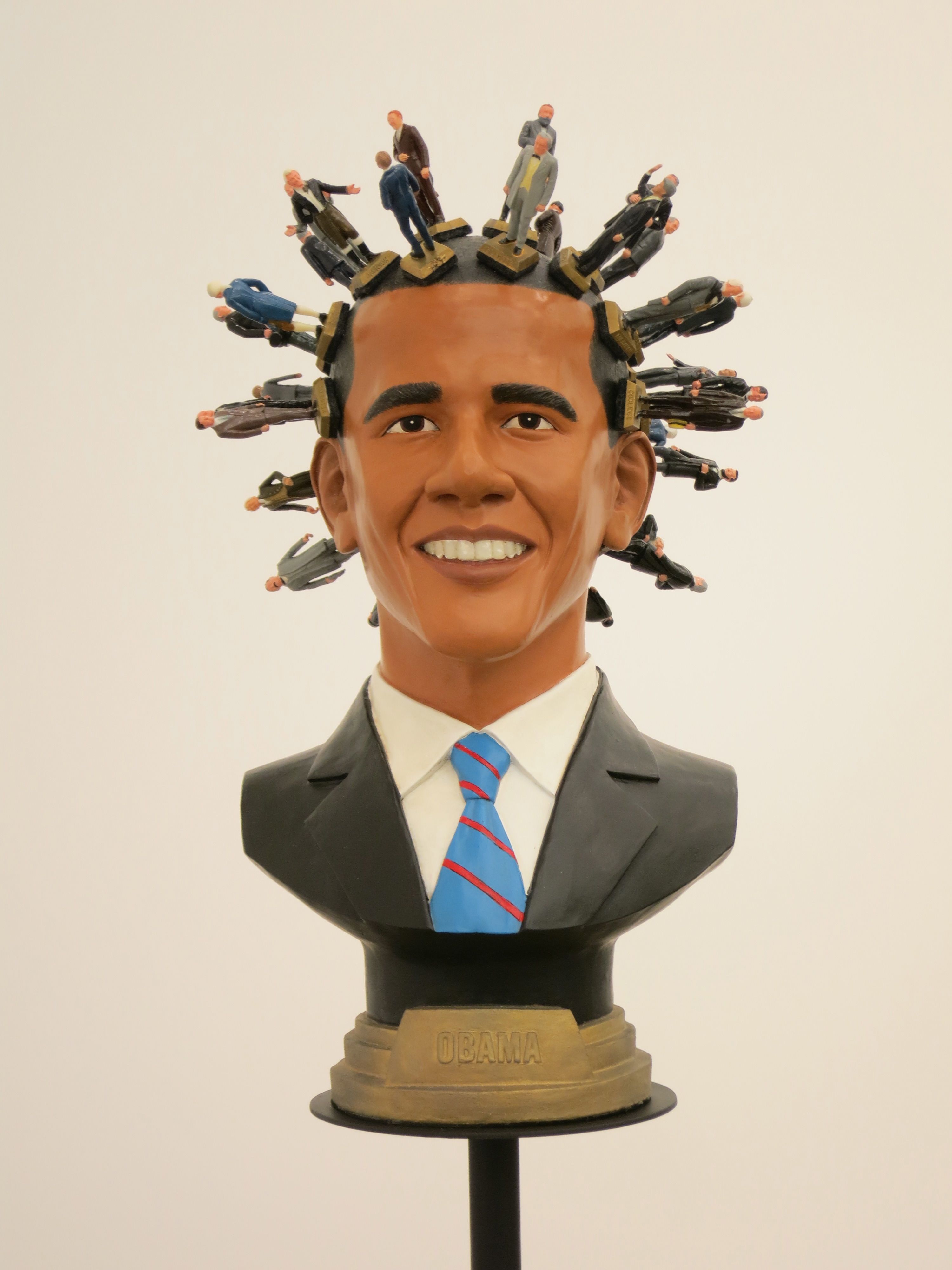 In addition to the presidents, there is a faux-silver aluminum 1950's Christmas tree on a base of colored lights. Titled "Spirit of '76," the spinning tree is adorned with ornaments created by the artist. Each one is a vintage miniature whiskey bottle with a presidential portrait. From Washington to Nixon, they reflect the artist's profound interest in cultural relics being recycled into our popular memory and reminding us of our all-American consumerism. 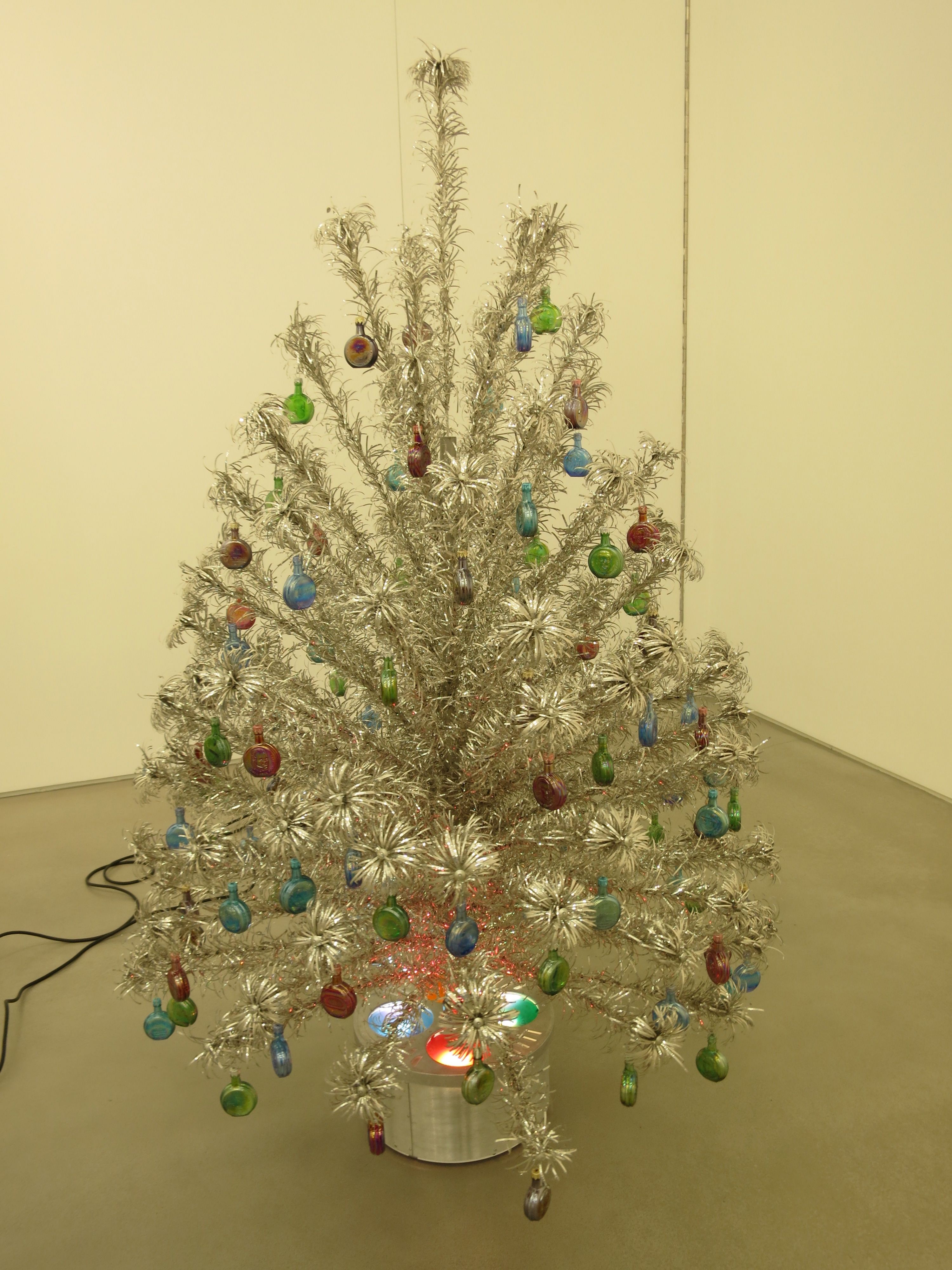 I am so impressed with the process, the depth of information, the serious gestures, as well as the fun and folly of these pieces. I don't know who will be "No. 45" but I'm sure Brian Tolle will be able to create a "gesture" that will be relevant only to him, and hopefully by "No. 46" he will become a she!