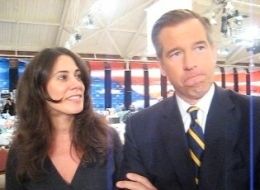 Isn't that the face of someone who loves his nickname? ETP had the opportunity to chat with "NBC Nightly News" anchor Brian Williams in New Hampshire on Tuesday night shortly after he delivered the newscast to an anxious nation, and shortly before people started looking at the returns and saying, wait a minute, there's something happening here. Later on MSNBC, we totally caught him recycling a few things he said (about the Hillary "cry" — though to cry, don't tears have to actually fall? Eh, like the pundits care). Good thing we gave him that practice run! Special bonus for this interview: It was shot by Subrata De, who is not only BriWi's crack producer at Nightly, but is also Canadian. Booyah! The original plan had been to shoot it old-school (i.e. filming with my arm out), but BriWi is maybe a tad bossy and put the kibosh on my arm-out two-shot and my inexpert selection of background lighting. Hmph. Luckily, Subrata was there to save the day, so I could ask him the two questions he said he had time for. (He had to do some affiliate interviews, and the people from Boston were waiting.) I won't say which one of us was wearing more makeup, but I appreciated his time and the chance to pick his brain about the campaign (NB: conversation not affected by results.). See below!