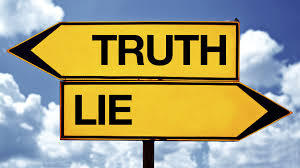 Allow me to introduce myself. I'm 5'9, blond, blue eyes, and was recently featured on the cover of the Sports Illustrated Swimsuit issue. I'm a Rhodes Scholar with an IQ of 180, and was named to the Forbes list of the 10 wealthiest people in the world. When I'm not traveling the world on my 500-foot yacht, I work with orphaned children.

OK. So I may have exaggerated a little bit. But hey, doesn't everyone lie?

Truthfully, I've often thought that honesty is a little overrated. I've long suspected that a world where truth reigned supreme would not be as appealing as some may think.

What would life be like in a lie-free world? The stock market would plummet, the divorce rate would skyrocket, families would be torn apart. Politicians, writers, ad execs, sales people, lawyers, police, doctors, accountants, therapists - all obsolete. Forget Hollywood! Without lying, Tinseltown would never survive.

In a lie-free world, people would be unable to maintain jobs and sustain relationships, rendering them in a state of perpetual fear and panic, relegating us all, to lonely lives of quiet desperation.

Truth would be the end of civilization as we know it.

When my friend Julia asks, "Does this outfit make me look fat?" should I go with the usual, "Of course not. If you and Halle Berry were in the same room, it would be impossible to tell you two apart." Or should I give this honesty thing a whirl, and encourage her to consider purchasing two seats for her upcoming flight out west, if not for her comfort, at least for the sake of the poor person forced to squeeze in next to her?

In a lie-free world, the unemployment rate would sky-rocket even higher as prospective candidates opted for total honesty during job interviews.

Job interviewer: "So tell me, what is it about your background and skills that would make you an excellent candidate for this position?"

Job seeker: "Well, I was fired from my last three jobs, and I possess no discernable skills, interest, or training for this job whatsoever. I'm short-tempered, bossy, and spend most of my free time perusing Facebook, while playing Words with Friends. So when do I start?"

What about that dreaded doubt that causes many a lover to query, "Honey, was it good for you?" If honesty became the best policy in the boudoir, candor in reaction to a mate's attempts at romance, may not only cool the most red-hot of lovers, but on a fortuitous note, it may also work wonders for population control.

Most ad campaigns would fail if the truth were told. The slogan "Have a Coke and a Smile" will sell a lot more beverages than "Have A Coke And End Up Toothless" would. Not surprising that those in charge of naming the extreme, erratic weather conditions of the past few decades, have opted for a new name, "Climate Change." (Sounds less scary than"Global Warming" I suppose.)

Like it or not, lying serves an important function. It's the glue that holds society together. It sustains careers, keeps marriages intact, fuels wars, sells billions of dollars of goods, and spares the more sensitive among us the devastating hurt that often accompanies the awful truth.

The truth? Can we really handle it? If I wanted truth, I probably wouldn't be tuning in to the evening news. Like most of the good folk of this nation, I get my news from reliable sources, you know, Facebook, Twitter, The Daily Show, (at least while I still can. Thanks for nothing, Jon Stewart!)

So what if I'm not a perfect blond, blue-eyed, brainy, billionaire beauty? Embellishing the truth doesn't make me a bad person, does it?

It's funny. That reminds me of the time I single-handedly rescued the Queen from a pack of hungry lions during an African safari. A very interesting story. Let's see, it all started when I met these three swarthy men, deep in the foothills of Tanzania...