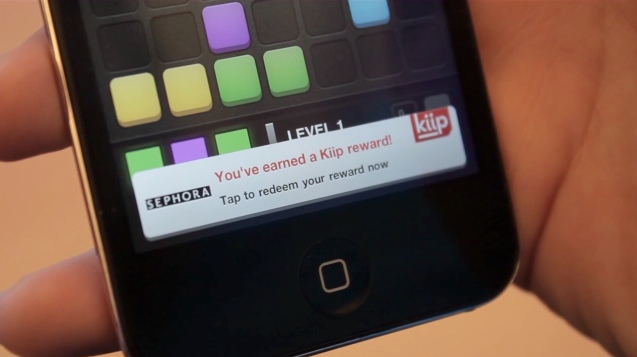 "What we've created is actually a marketplace for moments."

These are the words of Brian Wong, the 20-year-old founder of Kiip, a San Francisco tech start-up looking to shake up the world of advertising. Wong tells me this in the modest conference room of the South of Market work loft that serves as Kiip's headquarters. Through the glass behind him I can see twelve tables arranged into two large clusters where coders and designers crank away side by side. Their quest: to create a whole new way for advertisers to reach the ever expanding numbers of people playing games on their mobile devices.

"How do I help [gamers] tell me which moments are worth the most?" Wong asks, "And then how do I help brands tell me what to reward people with? And once I have those two pieces of the puzzle we have a thriving, buzzing, profitable marketplace."

Kiip transforms the practice of rewarding gamers with "achievements" -- virtual points and trophies for feats of skill -- into offers for products. Think of it as Groupon meets Angry Bird's high scoreboard. The very idea turns the traditional philosophy of advertising in the internet age -- which values screen real estate and number of impressions -- on its head, and puts emphasis on the emotional high points. It's a strategy that risks alienating the target audience.

"The moment is a very delicate moment," Wong acknowledges,  "and you do have the power to quickly ruin it if it's not properly catered to. Unfortunately, the only way to figure this out in its most ideal form is to just do it. And learn along the way. So I would be completely lying if I didn't say yeah we have some people who have been peeved and are not happy sometimes."

Hitting gamers with coupons in the middle of their play can also lead to strange juxtapositions. The demo video for Kiip features a puzzle game player receiving an award for the make-up store chain Sephora. Putting aside for a moment the simple numbers -- more women play mobile games than men -- the traditional image of a gamer is that of a guy. It's impossible to watch the video as a guy gamer without thinking "what would I do with a Sephora coupon?"

Wong has the angles covered.

"If you actually think of it for a second, we realize that it's not totally out of place," he says. "We've built into our reward units the ability to gift rewards to friends. So it actually happened to one of our employees. He got a Sephora reward and was like -- 'well what am I gonna do with a stick of mascara' -- he actually gifted it to his wife and look who was the star that evening."

It's this kind of thinking that shows the born-in-1991 Wong -- what some academics would call a "digital native" -- understands the subtleties of social media in a way many of his competitors do not. He sees the technology in the role of facilitating people's interactions, as opposed to determining them.

"Technology is so funny because, in the valley, everyone has this mentality of 'Oh let's not bother letting people do it themselves. Let's get this algorithm that reads all your words and goes through your profile and looks at your location. Let's just guess.'

It's the kind of insight that can only come from someone who has grown up alongside the technology. Instead of seeing the internet as a magical wonder birthed out of science fiction, Wong has the advantage of the web being a simple fact of life.

Not that Wong's sharp intellect and preternatural focus for a 20-year-old should be discounted. He accelerated through high school into college, graduating with a degree from the University of British Columbia at the age of 18 before landing a design job with Digg. As a nod to his gamer "bonafides," he credits  Counter-Strike -- just about the hardest of the hardcore PC shooters -- with endowing him with his powers as a designer.

"In Counter-Strike you have to be extremely accurate with your mouse. You have to shoot someone that is a group of pixels and move your mouse to that point within split seconds. Because of that my eye-hand coordination accuracy increased quite a bit... my efficiency of design as a result increased quite a bit. And I'm not gonna lie to you: I'm actually a lot faster than any other designer in orienting and proportionalizing, and moving objects around.

"I used to play Counter-Strike for ten hours a day."

That number throws me. How did he manage to play an online shooter for ten hours a day and still skip four grades of school?

"The Counter-Strike playing was more of a symptom of how bored I was in school because of how easy it was, rather than a thing that would have prevented me from doing what I was doing. I did manage to find the time because I finished homework in an hour, and then bam, was on to Counter-Strike."

The video game market continues to grown beyond its traditional user base and explore new revenue models. Kiip's small office sits just two floors above the legendary game studio Double Fine, which has in the past year shifted its output from major console releases to smaller downloadable games targeted at the connoisseur market. There's something appropriate to Wong -- with his experiential insight and skills sharpened by competitive multiplayer matches -- and his team grinding away at the future of the business of play.