How do you prepare for life after something catastrophic?

The people who likely would survive would be the realists. The people who know what can happen and embrace change as it arrives. The people who sacrifice their own selfish goals and lives to try and contribute to the greater good. There are people out there who genuinely want nothing but the chance to make the world a better place.

Even in a world that is inherently broken. This is the story of The Massive. 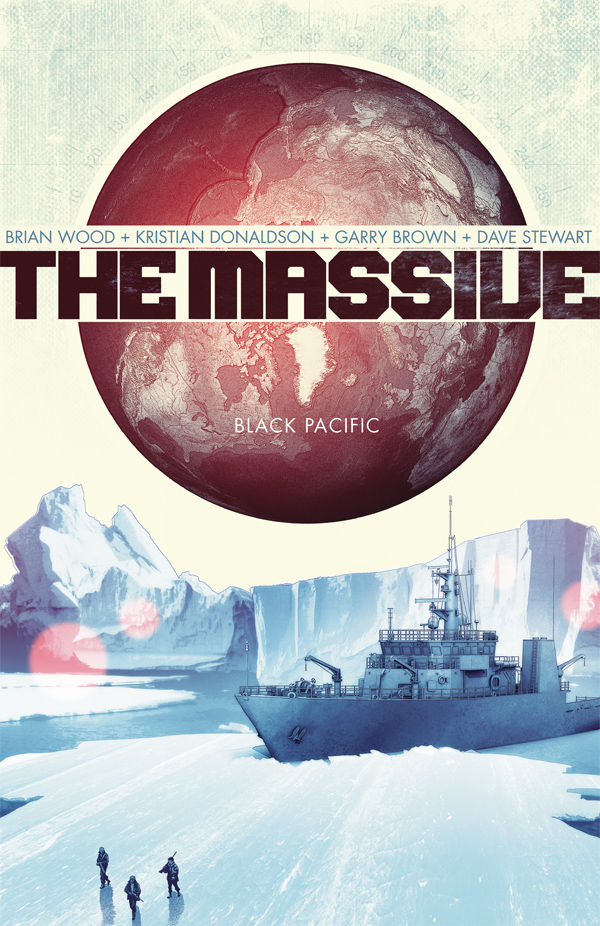 On March 20th, Dark Horse Comics will release the first volume of The Massive, written by Brian Wood and Illustrated by Kristian Donaldson and Garry Brown.

Dave: Tell me about yourself. Also can you give us a quick idea of what The Massive is all about?

Brian: I'm a 15-year (and counting) vet of the comic book industry, living in Brooklyn with a wife and two kids. I keep pretty busy. The Massive is my most recent big epic creation, a story about environmentalists and end-of-the-worth mythology, about identity and history and a little bit of dystopia. The main cast is built from activist types, do-gooders that all have dark pasts and have been striving to make the world a better place, only to see it start to crumble around them. Literally. 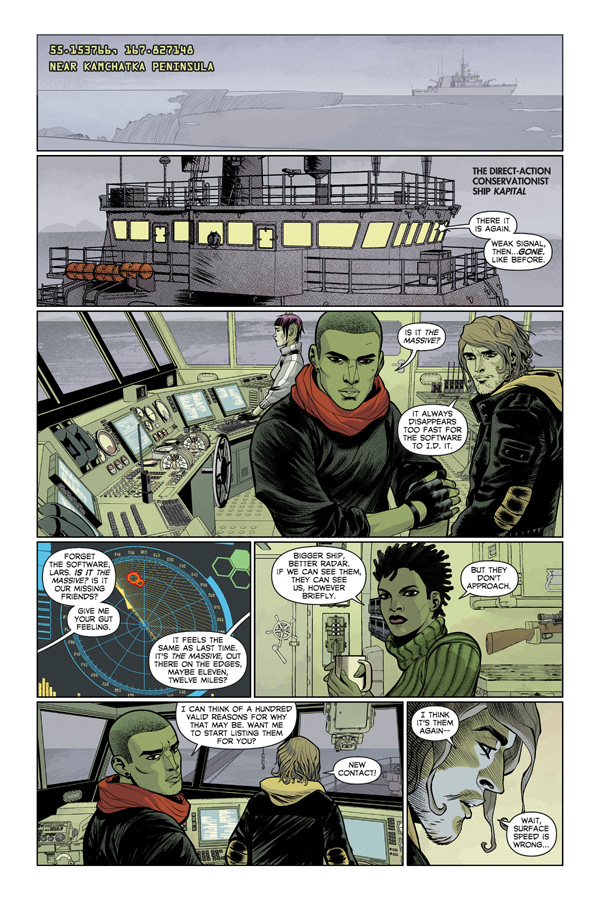 Dave: Have you freaked yourself out at any point while writing The Massive or doing research on natural disasters and the world ending? Do you think you look at the world differently since you started work on this series?

Brian: The only thing that freaks me out is thinking about my kids growing up in a changed world here the things that I, right now, take for granted will be unavailable to them. Like clean tap water, for example. Or water period. It's not the sexiest dystopian tidbit out there but somehow the loss of such a common item freaks me out. I think about it constantly. Somehow that's more real to me than anything larger, like peak oil or melting ice caps.

Dave: You've worked with Garry Brown since issue #4. What's that been like? I think a lot of people take for granted how hard it is to draw inanimate things like huge vessels and rigs and water but he makes it look effortless. 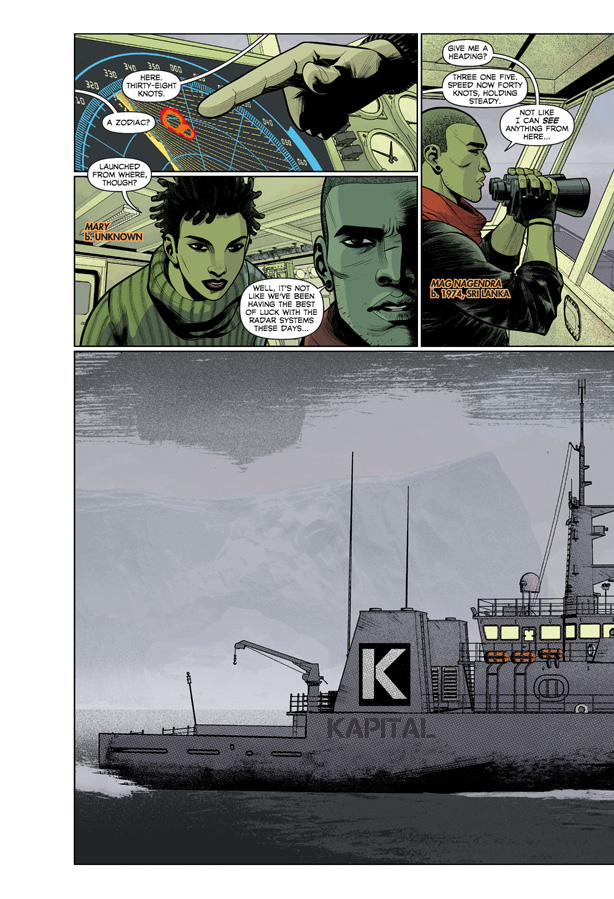 Brian: Garry's sort of new to drawing comics, but I've had a lot of luck in my career in partnering with up and coming artists and essentially tossing them in the deep end (and very applicable metaphor in the case of The Massive) in terms of challenging material to draw. He's been great, obviously, and like any good comic book partnership his style and look and influence has changed the direction of the series. Changed it for the better.

Dave: Do you still plan on ending The Massive after 30 issues? I love the idea of getting in and getting out of a series. Experiencing the full spectrum of a story, beginning, middle and end as you intended but do it in half the amount of issues most books run is exciting.

Brian: Thirty issues, yeah, nice and tidy in five volumes. I'm already halfway there in the writing of the scripts, and it feels oddly short, like its moving by too fast. But my last two big projects ended at 50 and 72 issues, and I'm not so keen to do that again. 30 feels right in this case. I'm really trying to pack it with story, so that while relatively short, will feel much more substantial.

Dave: What's it been like working with Dark Horse?

Brian: Zero complaints. Dark Horse have a great history with pioneering creator-owned and controlled work, and I'm enjoying that, and with a smaller company. Publishing with a place like DC Comics really has its perks, but at this point in my career I'm not as willing to surrender part ownership of my ideas to a corporation. It's nice to have options so I don't have to. 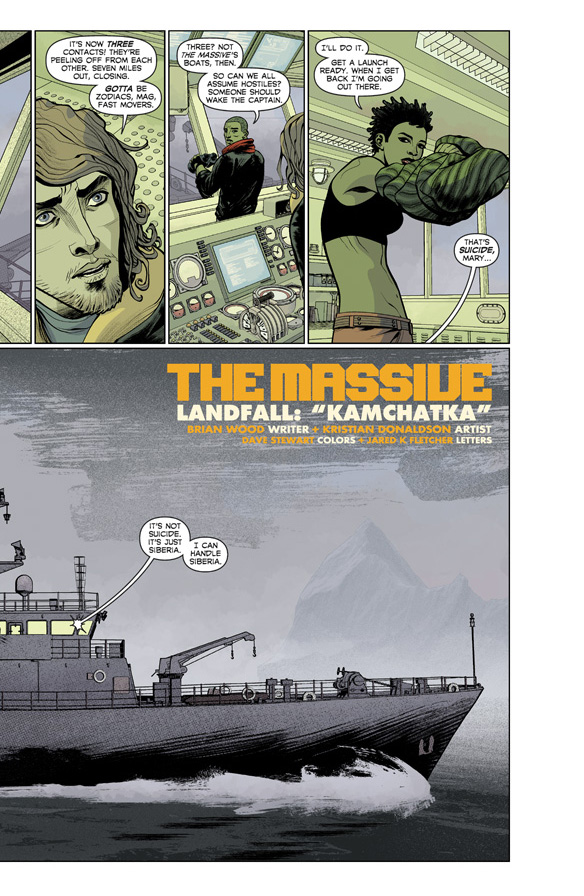 Dave: What can we expect for the future in The Massive?

Brian: A twist/surprise ending that is so pivotal that I dare not even hint at it. But when all is said and done, you'll be able to look back at the entire series, see all the clues along the way, and understand the story in an entirely new way. This is no simple dystopia.

Dave: You write hundreds of comics a month do you get any time to read comics? Anything you've been enjoying recently?

Brian: Haha, about 5 or 6 a month, which is possibly 2-3 too many for comfort, but I was blessed with many job offers I couldn't turn down. And I rarely read comics, to be honest. I read A LOT of X-Men comics in order to stay current, and a few good friends I have in the biz, I'll read theirs. But I'm going through a bit of a low period for comics because of all the research reading I do.

Dave: What do your kids think of your job? Also what's it like raising a family while writing so much material?

Brian: Well, I work from home which is priceless when having two little kids. I can be present for so much that I would just miss entirely if I worked a standard 9-5 office job. The flipside of that is it can be hard to get much done during the day, since I'm at home and responsible for errands and whatnot... Mr. Mom stuff. And my kids are still young so only the oldest has any sense of what I do, and she doesn't care/understand that much, which is a blessing. There's nothing I value more about my job than the ability to shut my office door and leave comics to rejoin my family. I need that separation, that time off from the biz.

Dave: Anything else you'd like to say to your fans?

Brian: Wow, pressure! You just handed me a microphone and left me on the stage. Well, rather lamely I will just say that since comics are such a labor of love, such a labor intensive way of telling a story, and at the same time so unique, much more than the sum of its parts, that I would recommend to anyone to seek them out, any comics at all.