We wrote yesterday of Brian Williams' trip to Afghanistan, and mentioned an anecdote from Williams' blog about his field producer, Subrata De. De accompanies Williams pretty much everywhere he goes — she was in Banda Aceh with him after the Tsunami, London for the Tony Blair interview, in the Gulf Region (Katrina) and the other Gulf Region (Iraq), Israel during the war with Hezbollah and around the country for various debates, primaries and related events. She's a superstar, and she also happens to be Canadian, as has perhaps been mentioned before in this space.

The anecdote in question was about the flight from Dubai to Afghanistan, whereon Subrata correctly anticipated that Afghan elders might try to bigfoot her out of her primo seat at the front, and suggested to her boss that they pretend to be married. Williams, ever the gentlemen, of course obliged and the two enjoyed pretend wedded bliss for as long as it took for the flight attendant to send the would-be interloper back to his assigned seat. Teamwork!

Williams mentioned the incident to Gail Shister in her interview posted on TVNewser this morning, and said that his wife, Jane, suggested that they post a photo of Subrata so the world could know her. What, a photo of a Canadian working in New York media, you say? I think I have one of those handy! May I present to you Subrata De (of the Thunder Bay Des), on the arm of her loving pretend-husband, Brian Williams, taken on location in the heart of Manchester, New Hampshire. Declared Williams to Shister: "She makes a great pretend wife." Aw!

NB to BriWi: Your whirlwind trip to Afghanistan sounds very romantic, but do yourself a favor and never refer to any woman as "lovely and sturdy." Just...trust me. 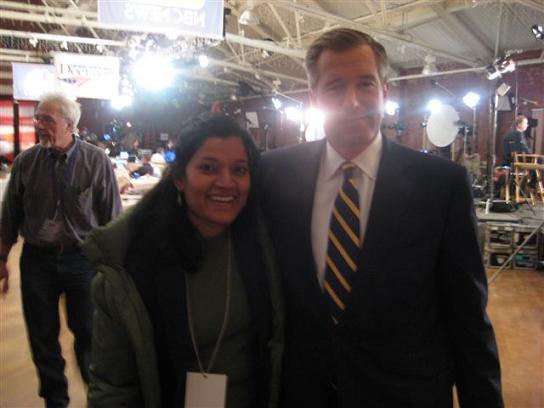 In a related note, this came up in my research, and is hilarious. Producer dude in question, I think you may be coming off as less than credible.