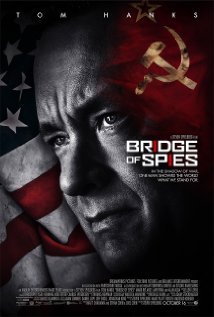 Some duos just work. In Bridge of Spies it is Tom Hanks and Steven Spielberg. Consider their previous actor/director partnerships: Saving Private Ryan (1998, Oscar for Spielberg, nomination for Hanks); Catch Me If You Can (2002); and Terminal (2004). It's been awhile, though now they are back -- jumping off a Cold War drama cliff together ("inspired by real events"), aiming to save the world and demonstrate that competence and determination can have their way.

James Donovan (Tom Hanks) is an American attorney, an Irish insurance lawyer from Brooklyn, with James Stewart's modesty and conviction but far better attire. Don't be fooled: He is a partner is a white glove New York firm who logged some time as a prosecutor at Nuremberg. His "friends" at the New York Bar elect him, without his running, to defend a Soviet spy, Rudolf Ivanovich Abel (arrestingly underplayed by Mark Rylance). Alan Alda plays Thomas Watters, the firm's senior partner who sacrificed Donovan to this thankless task since he can't possibly win the case. Worse, he stands to become a pariah in our late-'50s Soviet paranoid country, not to mention with his wife and kids.

Yet someone has to represent American justice, and Donovan is the man. The problem is that he is no fall guy: He believes in the Constitution, dismissive judges and U.S. security agencies like the FBI and CIA notwithstanding. Push him and he pushes back. Liberty and justice for all. Donovan comes away with sort of a win, which I can't say without a spoiler. Suffice it to say that his prescience sets in motion the bigger plot ahead.

Abel, the Soviet agent, is remanded to a federal prison while the U.S. is busy spying on the USSR. Being a spook has its price even if both sides are playing the game. Baby boomers will remember the spy planes we then flew over the Soviet Union. Those sleek, dark babies -- U2s -- could fly at 70,000 feet and film just about everything going on below. We were in a "cold" war, but a war nevertheless to protect our country from a "thermonuclear exchange," where taking shelter under a desk wouldn't really do the job. Enter Lt. Francis Gary Powers (Austin Stowell) who was supposed to have destroyed himself with his plane when hit in flight; but the best of plans are just that and he is captured by the Soviets.

Donovan's foresight in the Abel trial catapults him and the film to its next great act. The CIA decides to make Donovan the intermediary, with no protections, in a negotiation to retrieve the pilot in the custody of the USSR, but being held in East Berlin. It is 1960 and a wall is fast being built because too many Easterners are fleeing to the West. Donovan kisses his wife Mary (Amy Ryan) goodbye and reassures her all will be well. He sounds like an insurance lawyer to me -- except that he heads off to East Berlin, not East Hampton.

Another story line emerges. An unlucky 25-year-old Yale grad student in West Germany, Frederick Pryor (finely played as a naïf by Will Rogers), crosses the border to the East. A final brick is laid in the Wall, trapping him and leading to his imprisonment in the German Democratic Republic (GDR).

Donovan's job was to arrange a prisoner swap -- Abel for Powers. But he gets it into his head that why settle for one when he could have two, both Powers and Pryor. He represents everyman (or woman), with everyday deep values and ethics; plus he has the resourcefulness and will that has been a hallmark of America. Tom Hanks is not your anti-hero type and he is no Rambo: He is a hero in the old fashioned, roll up your sleeves and get your brain going kind of way. The film becomes a paean to being smart and resolute.

The Coen brothers and Matt Charman did the writing, which is crisp, ironic and respects the patriotism of all the diverse cultures and countries represented. DreamWorks (Mr. Spielberg directing), 20th Century Fox, and Participant Media collaborated to produce the film and Disney is distributing it. Like the Allies of yesteryear these companies know how to prosecute a movie campaign.

Go see this movie and enjoy the third act, which features the complexities of the negotiation, the type of people who drive success, and the dénouement where the US, the USSR, and the GDR have to settle on a deal. There's so much conveyed here that can give us hope in the midst of today's global turmoil and political falderal. A sanguine future for our world is not rocket science, it's about character and courage.

The opinions expressed here are solely my own as a psychiatrist and public health advocate. I receive no support from any pharmaceutical or device company.