The Pont Alexandre III is Paris's most elegant, grandiose, and sumptuous bridge: one of the most beautiful river crossings in the world. It was built for the Exposition Universelle of 1900, an international world's fair that introduced talking films, escalators, Russian nesting dolls, wireless telegraphy (radio), and the most powerful telescope ever built. 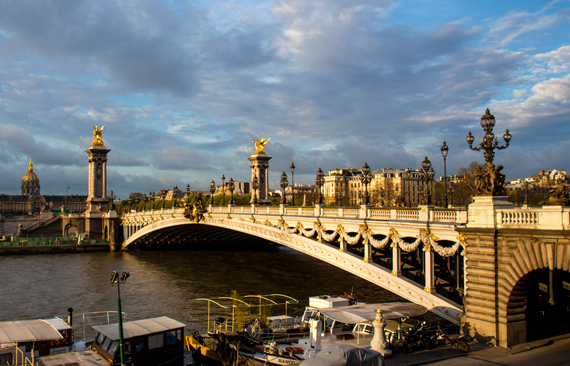 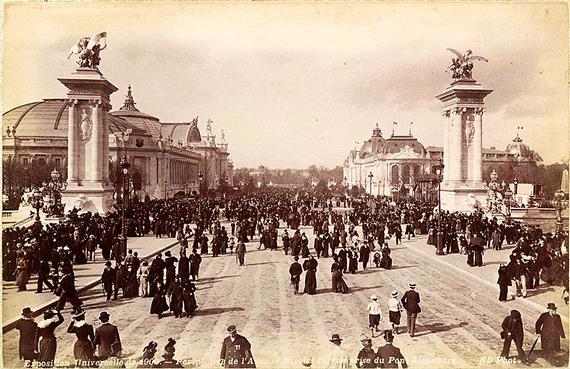 Rudolf Diesel exhibited his new combustion engine which ran only on peanut oil, and the city staged the first Olympic Games outside of Greece. The fair introduced the Art Nouveau style into popular culture and for the first time electric lights illuminated the City of Light. 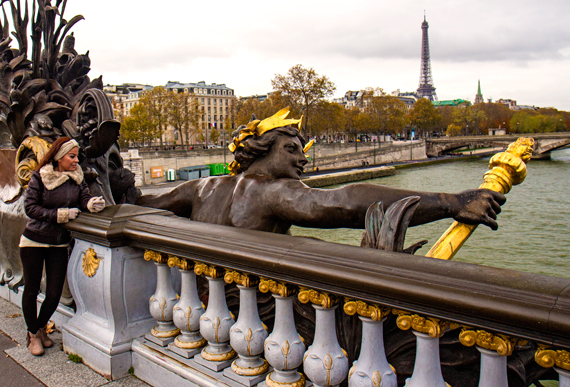 The bridge links Les Invalides, site of Napoleon's tomb, on the Left Bank with the Champs-Élysées on the Right Bank. Add in views of the Eiffel Tower and it becomes the ideal spot for wedding photographs. Crossing the bridge by foot takes you on a stroll through what might be thought of as Paris' premiere open-air (en plein air) museum, with an array of masterful sculptures--lions, cherubs, nymphs, maidens, cupids, water spirits, fish, scalloped seashells, and sea monsters. Gorgeous Art Nouveau lamps provide illumination. 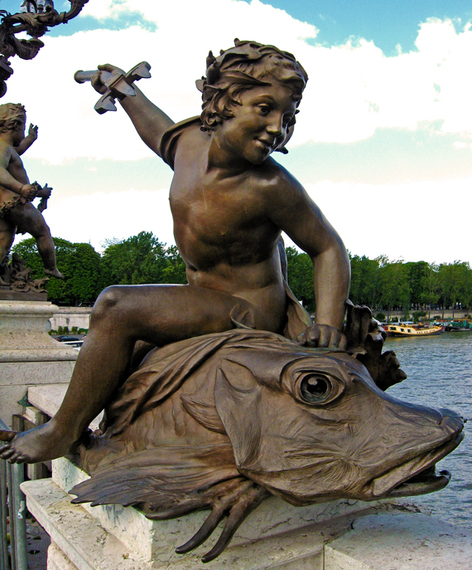 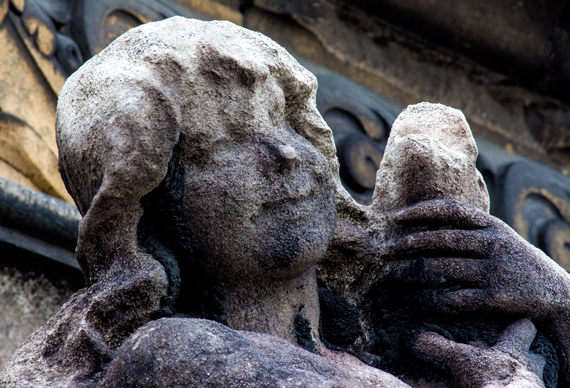 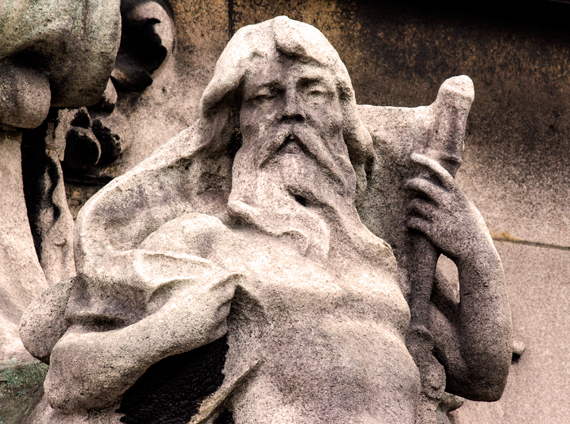 Four pillars provide stabilizing counterweight to the bridge's arch without obstructing the view. On each base sits an allegorical sculpture representing France in a different era: King Charlemagne, the Renaissance, King Louis XIV who built Versailles, and modern times. 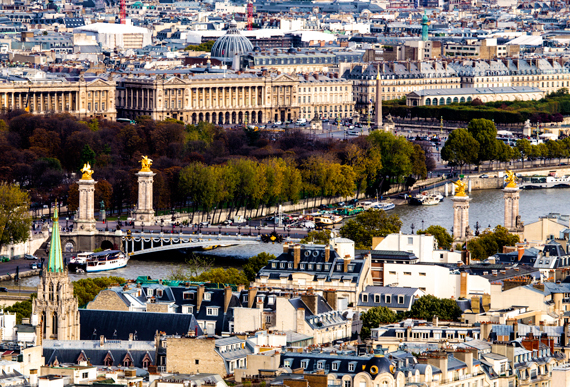 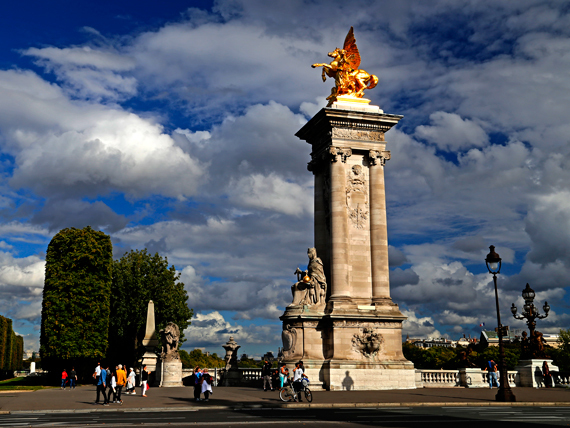 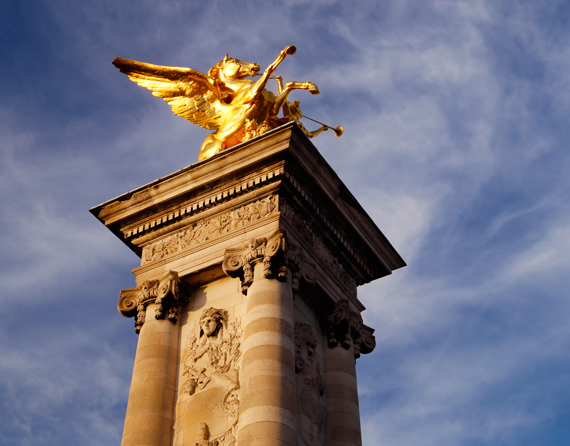 Following the Franco-Prussian War of 1870-71, a second wave of the industrial revolution brought affluence, prosperity, and even greater cultural influence to France and Paris in particular. Peace visited the Continent for over 40 years and the tenor of the times was optimistic. France's educational, medical, and scientific institutions were now the best in all Europe, despite stiff competition from England, Austria, and Germany. 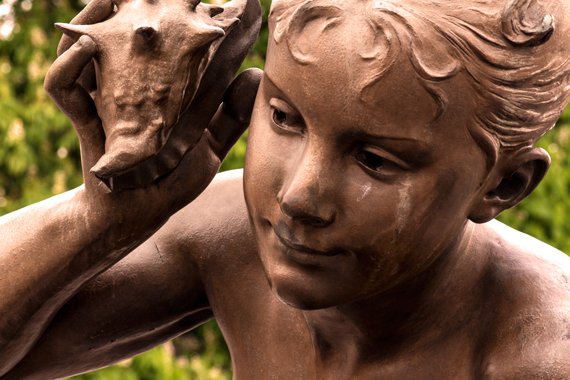 The bridge is named after Tsar Alexander III, who finalized a Russian alliance with the Third Republic in 1892. The bridge celebrates and commemorates this new diplomatic relationship between France and Russia, whose aristocracy learned to speak French at a young age as fluently as their native tongue. Alexander's son, Nicholas II, laid the bridge's foundation stone in October 1896. 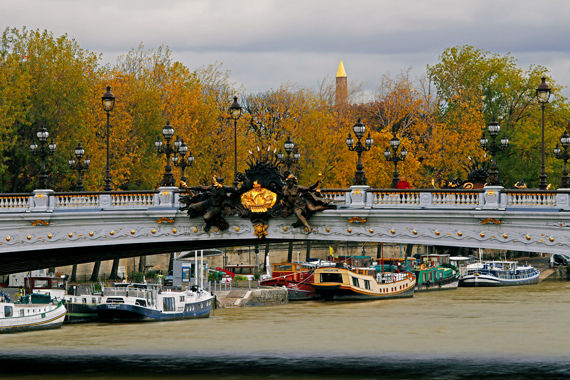 The single long, low arch of the Pont Alexandre III, with its Beaux Arts and Art Nouveau décor, exemplifies the Parisian Belle Époque ("Beautiful Era") of 1871 to 1914. During the Belle Époque the arts flourished, bringing forth the still popular Art Nouveau ("New Art") style, whose sinuous curves were a reaction to over-stuffed décor, and the result of the new popularity of Japanese and other Asian art. The era was given its name only retrospectively, after the devastation and suffering of the two world wars that followed. 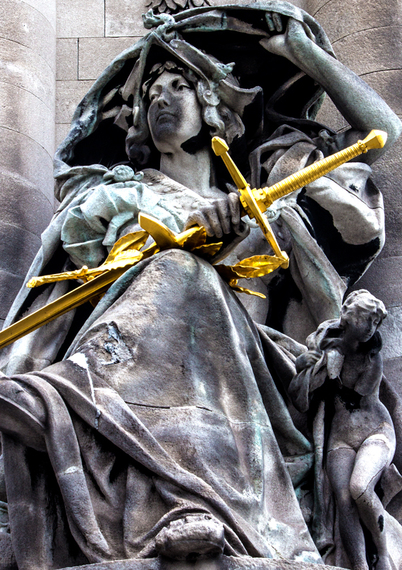 The Pont Alexandre III is more than just a river crossing. Dressed up with exquisite art, it is one of the most beautiful travel destinations in Paris. 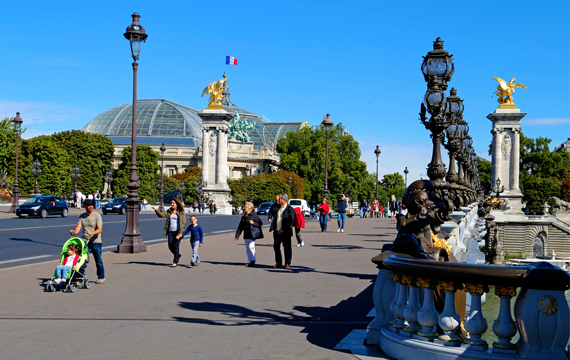