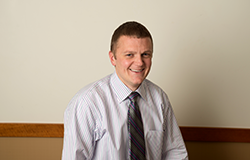 Anita's first semester in high school was a rough one. After the first month, she had five F's. The transition from middle school hit her particularly hard since many of her friends went to a different high school. Although she was smart and charming, she was also in serious trouble. My fellow teachers and I needed a strategy to address her challenges in a hurry.

Unfortunately, Anita is not alone. The transition from middle to high school is a critical inflection point, and students who fall behind in ninth grade are at great risk of dropping out. That is why I support the Middle School Success and High School Graduation Initiative Amendment, which aims to provide struggling schools with tools to help students bridge this gap. This summer, the Amendment, offered by Senators Tammy Baldwin, Sheldon Whitehouse, and others, will be up for discussion at the Senate as it debates reauthorizing the Elementary and Secondary Education Act (ESEA). The amendment replaces a current ESEA grant program with one that will focus on implementing comprehensive systems to help identify struggling students and keep them on track to graduate on-time college- and career-ready.

This amendment would provide funding to districts and schools for strategies such as the ones we have used successfully at Dunbar high school, a school on Chicago's south side, to help students like Anita. During the first month of the school year we established an early warning system, which is like a smoke detector for academic risk. Through this system we were able to identify Anita within the first month of her high school career and intervene before the problem became irrevocable. Our own data, as well as the data from the University of Chicago's Consortium on Chicago School Research, indicated that a student who is on track after their freshman year is four times more likely to graduate as a senior. We used these data to establish a Freshman-On-Track metric that helps us to identify students at risk of falling behind.

The metric laid bare disturbing trends among our freshmen. Only 40% were on track to graduate. To combat this issue, we began hosting weekly meetings with small groups of at-risk freshmen. These meetings were intimate, intended to strengthen student-staff relationships, were ongoing, and designed to let students know that we were there for them, whether they needed tutoring or just a sympathetic ear. We focused on building trust and slowly shifted our attention towards tutoring and developing sound academic skills.

As we began working with Anita, it became apparent that she needed a guiding hand and a solid base of support regardless of how big or small the problem was. We coached her through academic and personal struggles and monitored her progress. Anita's grades increased gradually and, by the end of the first semester, she was on solid ground and back on track.

Little by little, our on-track improved from 40 percent to 75 percent. The approach and our commitment to accountability for every student paid huge dividends. Teachers started to see their students in a different light and students began to see the hard work pay off when they received their progress reports. With tools like Freshman-On-Track, educators and schools can wrap their arms around at-risk children and provide them the support they need. Without early warning systems that trigger appropriate interventions, students like Anita are four times more likely to drop out of high school.

I urge Congress to vote for the Middle and High School Continuum for Success Amendment. We must, as a nation, do all that we can to push these students towards the right track. Rather than ending up as a tragic statistic, this amendment will help students like Anita get on board for towards a successful high school career.