Think our sun is bright? NASA says its NuSTAR space-based X-ray telescope has detected a dead star that pumps out as much energy as 10 million suns.

"You might think of this pulsar as the 'Mighty Mouse' of stellar remnants," Dr. Fiona A. Harrison, professor of physics and astronomy at the California Institute of Technology in Pasadena and the principal investigator of the NuSTAR mission, said in a written statement.

The super-bright pulsar--the brightest ever recorded--is located about 12 million light-years from Earth in the Messier 82 galaxy. It's an example of a class of mysterious celestial objects known as ultraluminous X-ray sources, or ULXs. 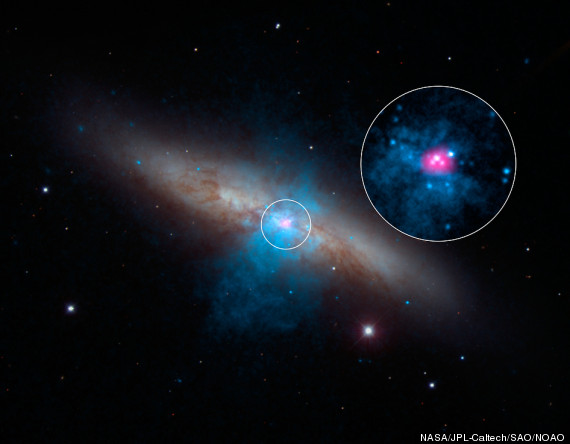 This image of the super-bright pulsar (shown here in magenta) was made using observational data from three telescopes, including NASA’s NuSTAR.

The discovery was unexpected, as all ULXs had been believed to be black holes in the process of consuming material from companion stars.

"We took it for granted that the powerful ULXs must be massive black holes," Dr. Matteo Bachetti, an astrophysicist at the University of Toulouse in France and the lead author of a new study about the pulsar, said in the statement. "When we first saw the pulsations in the data, we thought they must be from another source."

The X-rays are believed to be generated by the material as it heats up while falling into a dense object, in this case a pulsar. Although most of its luminosity is emitted in the form of X-rays, it's possible that the star also beams out visible light.

"How much visible light is emitted is actually an interesting thing to know," Bachetti told The Huffington Post in an email. "But since the star is so far away, images of it can be obtained [only] through very powerful telescopes."

In any case, the surprising discovery has scientists scratching their heads.

"This is going to challenge theorists and pave the way for a new understanding of the diversity of these fascinating objects," Dr. Jeanette Gladstone, a University of Alberta astronomer who wasn't involved in the research, said in the statement.

The paper was published Oct. 9 in the journal Nature.