NASA says it has discovered the brightest galaxy ever seen--a super-distant collection of stars that shines with the intensity of more than 300 trillion suns. 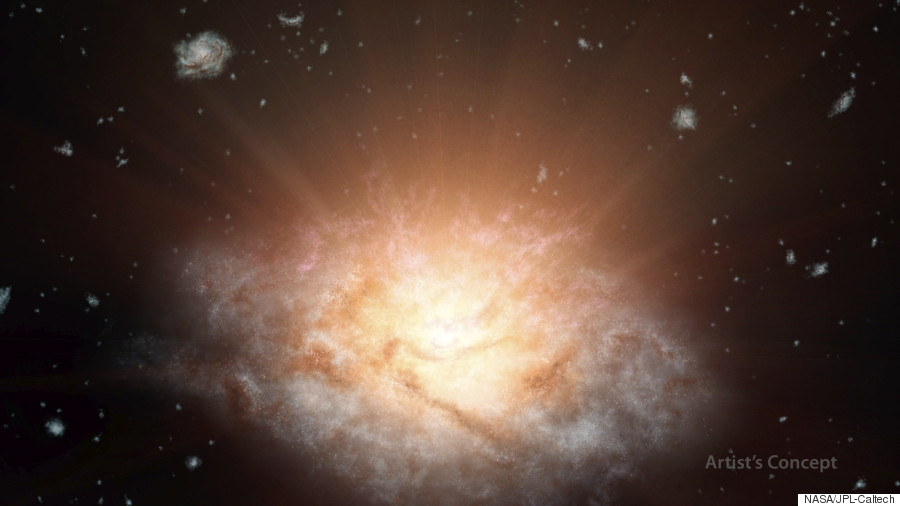 This artist's concept depicts the new record holder for the most luminous galaxy in the universe. The light from the galaxy, WISE J224607.57-052635.0, is brighter than 300 trillion suns.

The record-setting galaxy lies some 12.5 billion light-years from Earth and is an example of a new class of celestial objects known as extremely luminous infrared galaxies (ELIRGs). It was detected by the space agency's Wide-field Infrared Survey Explorer (WISE) space telescope and is known formally as WISE J224607.57-052635.0.

Why so bright? "We are looking at a very intense phase of galaxy evolution," Dr. Chao-Wei Tsai, of NASA's Jet Propulsion Laboratory in Pasadena, California and the lead author of a new paper about the galaxy, said in a written statement. "This dazzling light may be from the main growth spurt of the galaxy's black hole."

Tsai was talking about the mammoth giant black hole that likely lies at the core of the newly observed galaxy.

Hot cocoons. Big black holes are common in galactic cores, and while the holes themselves are dark, vast amounts of visible, ultraviolet, and X-ray light can be released as they suck in surrounding gas and matter. The light heats dust that "cocoons" the black hole, causing the dust to radiate infrared light.

This particular black hole was already billions of times the mass of the sun when the universe was only one-tenth of its present age of 13.8 billion years, according to NASA. The researchers aren't sure how the black hole grew so big so fast. To find out, they're planning additional research to determine the specific masses of the black holes in this and other ELIRGs.

The paper about the super-luminous galaxy was slated for publication today in The Astrophysical Journal.