Not often does a filmmaker present both an untenable social problem - and its solution. Not often is its filmmaker an artist as well as a banker and a lawyer. Meet Guy Jacobson through whose eyes in the film Redlight we meet two remarkable women opposed to childhood sexual slavery in Cambodia. One, the head of the opposition party there, and the other a woman who escaped the brothels to dedicate her life to freeing others. I sat down this week with Guy to hear more about the opening of his film Redlight, produced and narrated by UNICEF Goodwill Ambassador Lucy Liu. 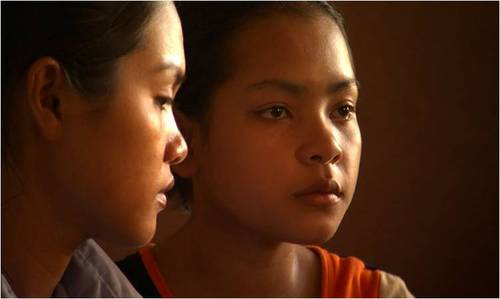 The film "Redlight" is produced and narrated by UNICEF Goodwill Ambassador Lucy Liu.

Having built a reputation of orphan care around the world known as Orphans International Worldwide (OIWW), and being a new friend of Cambodian legend, Nobel Peace Prize nominee Mu Sochua, I am familiar with the plight of sexually abused children. But the staggering figure of 2.5 million children aged 18 months to 18 years exploited for their young bodies made my skin crawl. They can be raped 20 - 30 times a day, and up to half of them will die from shock, torture, drugs, and/or AIDS. 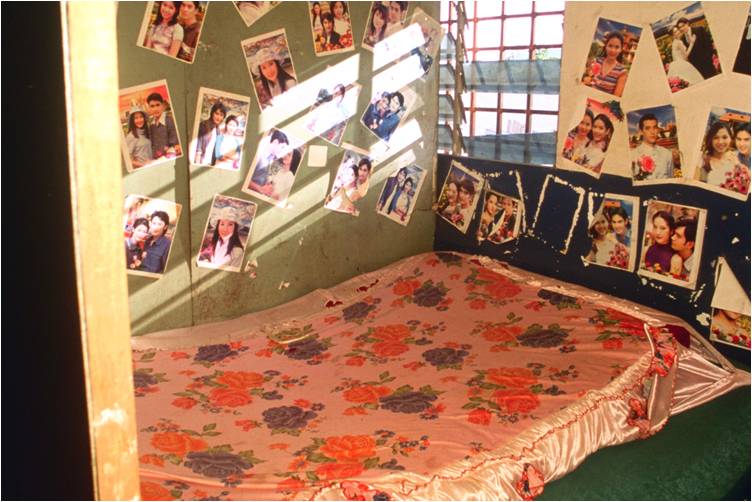 Two women are featured in the film, grassroots activist Somaly Mam and politician Mu Sochua. Filmed over a four year period, the incredibly moving Redlight focuses on the personal stories of the victims and two remarkable advocates for change in a nation that lived through the Killing Fields. Both women have since been nominated for the Noble Peace Prize and won other numerous human rights awards around the world. See the film's trailer on Vimeo.

The Honorary Host Committee includes Congresswoman Congressmember Carolyn B. Maloney, Ambassador Swanee Hunt, Lauren Bush, and Abigail Disney, among others. The event is sponsored in part by LexisNexis and co-hosted by the Cecilia Attias Foundation.

This special evening will be a multi-pronged event with two screenings offered. The official World Premiere Red Carpet Screening with limited tickets open to the public opens at 6pm. VIP guests will join the VIP reception and Q&A at the CUE Art Gallery, 511 West 25th Street. All other guests are invited to a one-hour open bar after-party from 9:30pm at the Juliet Supper Club, located at 539 West 21st Street. 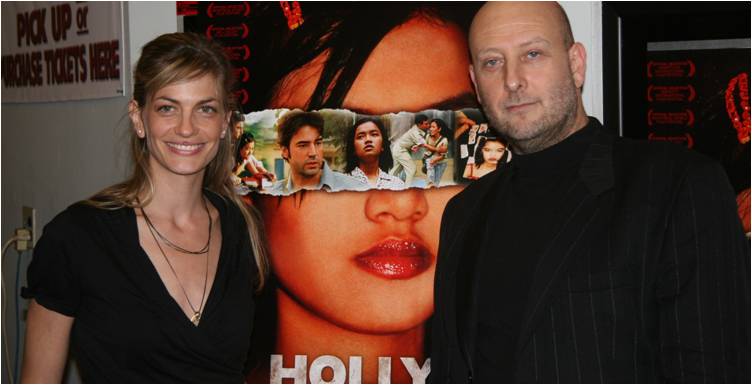 The General Public Red Carpet Screening is scheduled for 9:00pm, with an after-party also at the Juliet Supper Club. Both screenings will be followed by a Q&A session featuring, M.P. Mu Sochua, UNICEF's Global Chief of Child Protection Dr. Susan Bissell, and filmmakers Guy Jacobson and Israeli actress Adi Ezroni, both of whom won the prestigious U.S. State Department's Global Hero Award for their work. 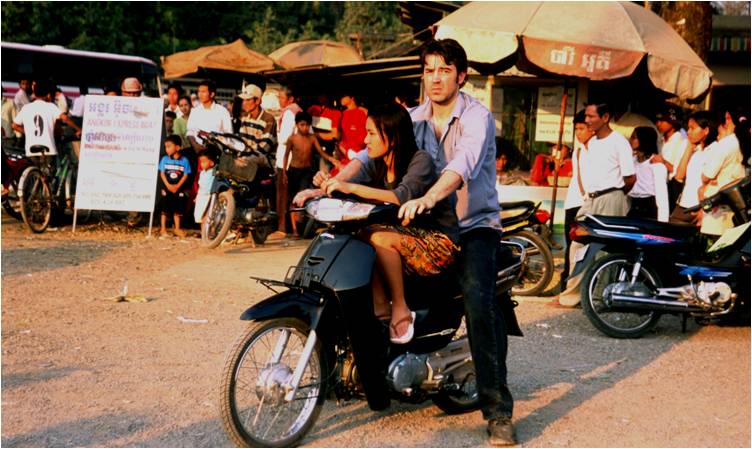 Ron Livingston stars as Patrick, an American card shark and dealer of stolen artifactsliving in Cambodia for years, when he encounters Holly, a 12-year-old Vietnamese girl sold by her impoverished family and smuggled across the border to work as a prostitute inthe feature film Holly, a captivating, touching and emotional experience, that highlights the growing international issue of human trafficking. Photo: Elkana Jacobson.

This film is the second in Guy's trilogy, known as the K11 Project. Holly was the first in 2007, the story of a 12-year old prostitute who captures the jaded heart of a foreigner living in Cambodia who in turn goes out of his way to rescue her from the criminal element that controls her. This filmed premiered at the United Nations, with honorary committee members including Susan Sarandon and Hillary Clinton. All three films benefit from Guy's undercover work in Cambodian brothels, using espionage equipment and secret cameras to research the plight of child trafficking victims. 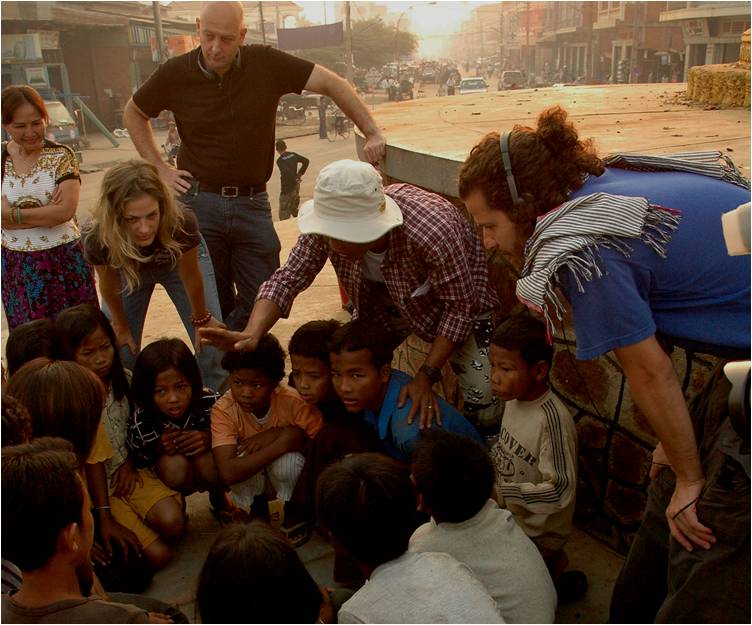 Filmmaker, banker and lawyer Guy Jacobson, standing, with his team in Batambang, Cambodia.

To make Redlight in Cambodia, where he was challenging the underground that profit off the lives of children, Guy had to surround himself with 40 bodyguards armed with automatic weapons. As Lucy Liu states in the film, the brothels are powerful and notoriously violent. "I come from Israel originally. I know how to take care of myself," Guy shrugged with a smile. At one point, Interpol contacted Guy to warn him to flee the country because the Chinese, Vietnamese, and Cambodian mafia had hits taken out on his life.

In 2000, Guy left the intersection of investment banking and law here in NYC to spend two years travelling the world. In Phnom Penh he walked down one street where he was surrounded by a large group of girls competing to offer his sexual favors in exchange for cash. Just as my first visit to an orphanage 'warehouse' led to my epiphany, Guy's experience with these girls led to his life commitment to end the plight of red light children, leading him to found an organization to help end exploitation by the same name. 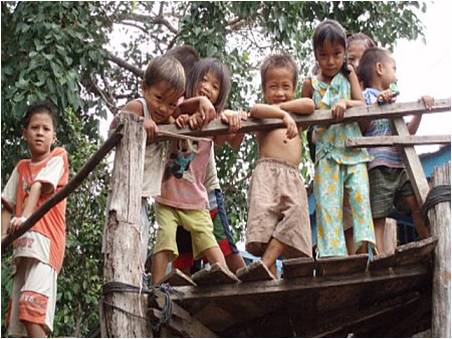 Children in Cambodia fishing villages, as children anywhere in the world, can be in danger.

Guy's cutting-edge strategy to end the sexual exploitation of children is to work with major law firms around the world s, and focus on filing civil suits on behalf of a victim against an exploiter in each city, sending a message of deterrence across oceans like a Tsunami. "This does not end exploitation on its own, but sends a chill down the spines of the exploiters." Guy told me. If it scared only 10%, it would save 250,000 children. "Governments in many countries are not strong enough to fight this scourge effectively. We need to fight for the children ourselves, in the civil courts and arena of public opinion."

The Redlight Children Campaign originally aimed at pressuring governments to enact or amend legislation to address this issue more effectively and allocate more resources towards enforcement of laws. This has proven to be difficult. Now, in addition to the original strategy, Guy wants to make it more difficult and costly for perpetrators to sexually abuse children. Redlight Children has partnered with LexisNexis to create both an international case law database for trafficking, and a trafficking offenders database to assist lawmakers and prosecutors.

Every single day children are kidnapped or stolen and forced into the global, multi-billion dollar sex industry. Interpol estimates that this trafficking of children and young women is the third largest international criminal activity.

Its scope is shocking. According to UNICEF, over two million children are involved -- from kids around the world who are kidnapped from their families to children victimized on the internet via community sites and chatrooms.

To effectively counter the violent mobs who control child exploitation around the world, Guy turned to his artistic past and decided to incorporate film with law and finance. He began Priority Films. He understood that to solve a problem, he had to first bring people to the realization that such a problem existed. He chose to do this through film, using the law and financial pressure to provide a cutting-edge solution. His film company is a cutting edge 'micro studio' with a focus on low budget, high quality, commercial films. He has created a strong grassroots approach to film, producing the K11 Project, the most comprehensive film project about child trafficking and child prostitution to date. 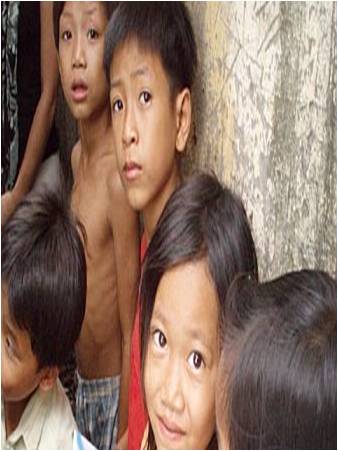 At the end of the day, we must ask ourselves: are our world's children safe?

Human trafficking is a brutal and horrific reality. I hope you will support efforts in the fight against this global epidemic. Proceeds from this important event will benefit RedLight Children and Restore NYC, two not for profit organizations both working tirelessly to end slavery and child exploitation.

For further issues, facts and the rule of law, see LexisNexis website.
To buy the DVD, go to Priority Films website.

Who Was Chea Vichea and Why Does He Matter? Ask Filmmaker Bradley Cox (Stewardship Report)