It seems like only yesterday when the then-unknown Gabrielle Union teamed up with Kirsten Dunst to create the cheertastic cult classic, "Bring It On." Over a decade later, the worn-out franchise has seen the longevity and relative irrelevance of straight-to-DVD releases like other teenybopper series (i.e. American Pie, Step Up, Scary Movie, etc.). However, unlike its more farcical contemporaries, the flagship Bring It On satirically addresses social injustices while comically delving into a popular subculture. As it turns out, the Toros of Rancho Carne High were tackling issues of feminism, race, and gender roles well before Rowan Blanchard was a plus sign on a pregnancy test.

Fifteen years later, where everyone is a feminist and the waters of gender equality have become murky by the clot of white POV, the central themes of Bring It On serve as a road map to the basic idea of practicing an all-encompassing intersectional feminism. Here is the cliffnotes version:

1. The Dangers Of Cultural Appropriation

Who could forget this notorious scene featuring Gabrielle Union and two-thirds of the futuristic R&B group Blaque.

While a teen-flick about stolen cheer choreography doesn't seem to level the magnitude of upset as Rachel Dolezal's 'blackface' or any of Azealia Banks's beefs , there is an underlying theme of cultural appropriation, particularly how said appropriation can lead to the erasure of the people who originated their culture. Amandla Stenberg summed it up best in her treatise on cultural appropriation and epic read of repeat offender Kylie Jenner . (I wonder if Kylie is a fan of Bring It On?) 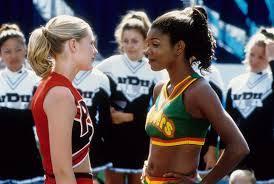 There has always been a trope of black women in history and media as "angry." Most recently seen in the exchange between Nicki Minaj & Taylor Swift over the VMAs. Bring It On, however, took a light-hearted stab at addressing why it may be perceived that black women come off as angry in their fight for equality. Instead of portraying Gabrielle Union's character Isis as antagonistic, violent, and unreasonable, she was grounded in her resolve for the best opportunities for the community she led. She often displayed more coolness under pressure than her counterpart Torrance and any anger she may have possessed was justified by the historic and systematic theft of her predecessor's talent and skill by those of her rival's...sounds familiar?

3. Competitiveness & Leadership Aren't Gender Specific
Rivalry, outside of beauty and romance, is not a trait traditionally fostered in girls. In fact, even in 2015 women are still vilified for being competitive in sports and demonstrating the same level of passion for their field as men. Bring It On was exemplary for demonstrating both skilled competitors and effective leaders in a very athletic environment. I mean who could forget Missy's awesome audition for the Toros?

Torrance faced the inevitable conundrum of every woman who has ever held a position of power: how to be authoritative without being antagonistic? (I.E. How to get one's point across without appearing as a bitch?) While many have suggested that it takes bitchy behavior to be respected as a woman in charge, Kirsten's skillful acting shows the complexities of leadership that calls for harsh language and action but shows that when one is adamant and authentic in their approach, they will earn the respect of their peers. (Except for the bitches of course!)

5. Don't Conform To Gender Stereotypes
It can never be stated enough that feminism about equality between the sexes and while that definitely means supporting women in pursuing roles traditionally delegated to men, it also includes not shaming heterosexual men for pursuing roles that are traditionally associated with women. While used as a device of comic relief Bring It On teaches us about gender roles and homophobia as the high school jocks in typical jock fashion gay bash the male cheerleader Jan, who is actually straight. Jan shows that gender equality extends both ways and that masculinity exists in many forms (he's also notably a more successful athlete than his bullies.)

And with perks like this, he shows there are some clear benefits to joining the cheer team!

There still a lot of strides to be made in the quest for trans, racial, and gender equality. However, along the quest there is a need for media that positively shows how such equality can be and is beneficial to society. As much as we like to think that the lack of representation for women of color and men in the feminist movement is due to lack of voices it's so amazing to see that even 15 years ago cheesy cheerleading comedies were able to make poignant observations about intersectionality.

There's no longer an excuse for young white feminists to be ignorant of intersectional feminism; they were basically raised with it. So the next time an ill-informed person attempts to belittle or deny the voice of asian, black, or latino women tell them to Bring It On!