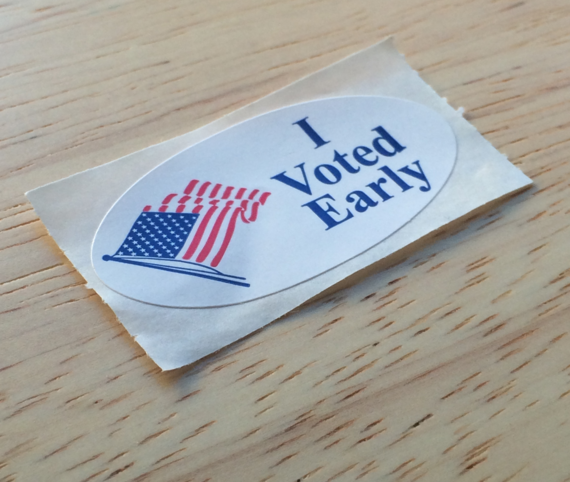 While I waited in line to vote early, I tried to summon a sense of awe for the gravity of my circumstance. If I'm honest, the moment seemed a lot smaller. My shoes squeaked on the high school gym floor as I shuffled along a line of strangers. I felt more like a teenager trying to duck out of P.E. class than a link in the 240-year chain of civic ritual that will elect the next president of the United States.

When we think of the history of our nation, it is easier to see a river than the countless tiny streams that feed it. But the incredible truth is that the trajectory of the United States is not a singular thrust or continuous narrative; it is shaped and reshaped by millions of little moments like my afternoon in a high school gym. By weighing the issues that matter to us, using our small moment of leverage to shift the course of our own lives, we direct the course of history.

But one decision we have to make sets us markedly apart from our earliest predecessors. The responsibility of choosing the most powerful executive authority of the country is a heavy enough burden. In the nuclear age, we must choose an executive authority who can single-handedly destroy human civilization.

The president of the United States inherits a bristling arsenal of over 4,500 nuclear weapons. He or she has unlimited authority to launch those weapons, requiring neither reason nor explanation. Minutes after the president issues the command, missiles will leave their silos -- wiping entire cities off the map, irreparably damaging global climate, and creating a humanitarian disaster on a scale beyond imagination.

This reality is anathema to the most fundamental principles of our democracy. The United States was founded to uphold the value that no person or institution should wield absolute power. However, the creators of our political system could not have anticipated that a single human being would be capable of delivering death to millions in a matter of minutes.

Nuclear war was never intended to be on the ballot.

But unfortunately for us, it is. We get one opportunity to weigh in on which human being to entrust with inhuman power. That opportunity ends on November 8. There are no other checks or balances to constrain the nuclear dictator who will reign for the next four years.

Nuclear weapons deserve a place of utmost primacy in your mind as you vote this election. Who we intrust with the nuclear arsenal is a matter of life and death, not just for you and your family but for every person on this planet. The ability to influence that choice is a tremendous privilege and a terrible burden.

It is imperative to choose steady hands tomorrow, because someone's finger will inevitably hover over the red button.

But the madness of the system itself cannot be tolerated. We must choose leaders who will respect the horrific brutality of nuclear weapons and work ceaselessly to end the threat they pose to humanity. Before our vibrant democracy can begin to tackle the challenges of our future, we must first dismantle our nuclear autocracy.

Bring nuclear weapons to the ballot box. And hope, if we make the right decisions now, the generations to come won't have to do the same.