So, this is a my "Official Ombudsman for the Huffington Post" column, except that I'm not an ombudsman. But hey, the Huffington Post is big, I have full trust they can take it. And when you generally do such a strong job, listening to criticism is what you do to get even better.

Among its many areas of interest, I'm particularly impressed how much technology coverage the Huffington Post provides. I've been writing a tech column for 15 years, so it's something I pay close attention to.

They do a very good job with technology. Seriously.

Except one blind spot.

It's not just me. If it was, then it'd be fine. Recently, I was in Berlin covering the IFA tech trade show, and shuttled to the fairgrounds with the group of American reporters. When HuffPo's coverage of Apple came up, let's just say it was chided. "Oh, you've noticed it, too?" I hesitantly asked a well-known guru of tech writing. "Are you kidding?" he laughed with the others, "It's become a joke."

To be clear, I mainly write about Windows products, but I've written about Apple, as well. I've liked things from both, and have quibbled about them. The issue for me isn't the label, but how it works.

I know the iPhone is wildly popular. But the Android platform is even more so. I know Mac computers are good -- but 90 percent of the operating systems around the world are Microsoft.

You'd struggle to tell that from HuffPo's otherwise excellent and indeed often vibrant tech coverage. It's an Apple world.

Honestly, I was hoping not to write about this, I've even sent notes privately. But a line finally got crossed too far.

I almost wrote something a couple months ago when a front page article dismissed Windows 8. "Experts Slam Windows 8, Say You'll Hate It Too" was the sub-heading on the homepage. I was taken aback since CNET, perhaps the leading tech publication in the world, had reviewed Window 8 only days before and gave it 4 stars out of 5. Users gave it 3-1/2 stars. Hardly something that suggests it will be universally hated. Further, most of the experts quoted were publications I'd barely even heard of. Yet CNET was left out.

(Here's the CNET review link, by the way.)

I also almost wrote something a couple weeks back when Microsoft had a major announcement, finally pricing its Surface tablet. ALL Windows tablet companies had been holding up their own pricing until Microsoft acted. So, this story was a really big deal in the tech world. Huge. But it was buried in the middle of the Tech page. Meanwhile, on the main Huffington Post homepage there were three articles about Apple -- including one simply about invitations to a future Apple event.

But last Monday, it finally reached the "c'mon, guys, you're better than this" stage.

An article written by the AP that was posted on the Huffington Tech page once again slammed Microsoft. Now, to be clear, it's fair game to slam Microsoft." They've screwed up a lot. And done good. Just like Apple. But this article -- well, it finally went too far. To be fair, the article as I said was from the AP, not HuffPo, though someone decided to use it and write the headline. 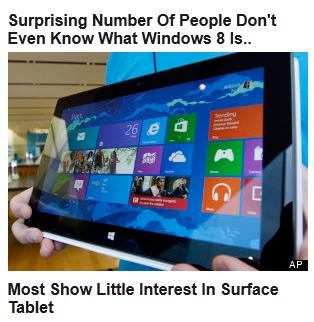 To put it politely, the story was so slanted that made me finally write this.

2) The article laments that 69 percent of people have "little or no interest" in buying a Surface tablet. But consider: that means the remaining 31 percent of the American public actually has interest in buying one, which is potentially 77 million units!!

3) It dismissively says Windows 8 "could appeal" to those who "still don't have a home computer." But the reality is, Windows 8 will be on every, single new PC sold in the world. There are 400 million Windows PCs. Eventually, all those will become obsolete and replaced.

4) A recurring quote pointedly asks, "Why change Windows? It does everything I need now." That's a valid thought... except, I'm dead-certain people said that about DOS. And said it about the first Apple operating system. And about every version since.

5) The article notes comments Microsoft is in the "early stages" of a $1 billion (!!) TV campaign for "a wider audience." But that means the company hasn't even started seriously promoting it yet. After that billion dollars has been spent, I suspect a lot more people will know about it.

6) With all respect to 75-year-old ladies, who the article quotes criticizing Windows 8, I suspect that's not the market that Microsoft is going after.

The article does say positive things about Windows 8. But they're buried near the end.

Keep in mind, this article dismissing Windows 8 came only three days after the product was released.

It's not just me. User comments after the article are peppered with Apple Love complaints. They too just seem to think a little perspective is required, that's all.

Honestly, I have no idea how people will react to Windows 8. It's a massive risk. Yet it may be a brilliant move -- converging PCs, tablets and phones under a single operating system.

But this isn't about Windows 8. Or who makes better products. The sole point here is Apple Love (and Microsoft disdain) on the HuffPo tech pages. Huffington Post coverage of technology is extensive. And often excellent. But blind Apple Love where top-notch journalism otherwise resides does a massive disservice.

So, enough already. The Huffington Post is better than that. I know because I see it every day.

Smartphones, tablets and computers together, more people use Windows in the world than any other operating system.

No matter how much anyone may love Apple products (wonderful as they can be at times), it just looks naïve when you ignore this reality.

It's just too much when your banner news headline on the Tech page is about invitations to an upcoming Apple event. Even if it wasn't the same day Microsoft made an actual, major announcement. Right?