Since its introduction in 2008, Bitcoin, the world's most recognized and frequently used crypto-currency has continued to grow in popularity. Bitcoin's peer-to-peer decentralized structure has steadily attracted global users seeking to make purchases and transfers of money digitally, privately, and with minimal transaction costs.

At its current market cap of over $3 billion dollars, it is difficult to find an area of the world which has not been touched by Bitcoin. Yet, until recently, Cuba was one of these places. With low levels of internet penetration on the island, not only are few Cubans even aware of Bitcoin, but the lack of technical infrastructure can serve to impede the ability of Cubans to undertake virtual currency transactions.

Into this scenario, stepped in Fernando Villar. A first-generation Cuban-American tech entrepreneur based in New Jersey, Fernando made his first visit to the island early this summer. As the founder of BitcoinCuba, Fernando's mission was twofold: visit family and experience the country of his parent's birth and explore the capacity for Cubans to adopt virtual currency in their everyday lives. As a result, in mid-July, Fernando became the architect of a historical moment: Cuba's first documented Bitcoin transaction.

I recently had the opportunity to sit down with Fernando to discuss his background, the goal of his organization, the potential of virtual currency in Latin America, and his trip to Cuba. Hope you enjoy! 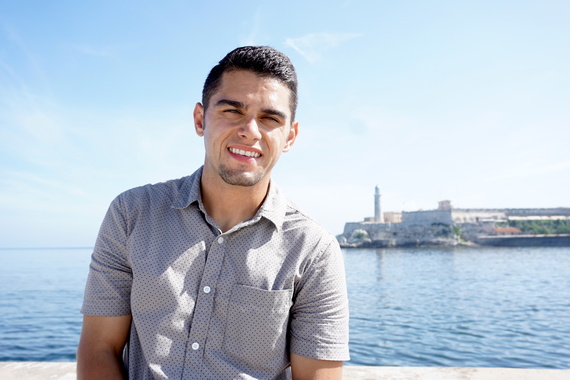 CG: Virtual currency is a relatively new and complex concept, what is your background and what drew you to virtual currency/Bitcoin?

FV: I've been working with digital technologies for over 6 years as a consultant and designer. I was drawn to Bitcoin a few years ago. I heard about it on a forum and researched the potential it had in facilitating payments, especially in the developing world. Bitcoin, in essence, is digital cash and like the USD and Euro, can be used to buy tangible things. The only difference is that it isn't just money, it's the internet of money. Bitcoin is a decentralized and deflationary currency backed by math and not by a central bank or authority that can manipulate it.This is a powerful technology because it eliminates the need to rely on payment processors and banks. It's transparent with a public ledger (blockchain), secure, nearly instant, and free for everyone to use.

CG: You are the founder of BitcoinCuba. What's your organization's goal and why Cuba? In the short term, what will BitcoinCuba seek to accomplish? And in the long term?

FV: BitcoinCuba's mission is to inform average Cubans and the small tech community about the use of digital currencies like Bitcoin. Cubans have much to gain from using this currency and technology, especially now that they are in a position to leapfrog current financial and telecommunication infrastructures.

Cubans are not using credit or debit cards and most do not have a bank account. Bitcoin and blockchain can serve the needs of the unbanked, including entrepreneurs and individuals on the island. For instance, an entrepreneur in Cuba can offer their goods or services and get paid for it by a customer any where in the world instantly. A family wanting to send money to relatives in Cuba, using Bitcoin, would now have a method that is faster and cheaper than ever. This will take some time to be a reality but it's already happening around the world.

In the short term, BitcoinCuba is planning on organizing workshops and conferences to inform and educate Cuban entrepreneurs and anyone who cares to know about this new technology. In the long term, BitcoinCuba wants to help facilitate a marketplace for digital currencies so that Cubans can start using and developing Bitcoin technologies.

CG: You recently completed the first documented Bitcoin Transaction in Cuba. This event has been described by some observers as historic. Tell me about this transaction, how it came about, how you did it, and can you also talk about some of the challenges to scaling the use of Bitcoin in Cuba.

FV: I was taking a personal trip to Cuba to visit family on the island. There had been reports about the new Wi-Fi networks in public parks and I wanted to test their connectivity. BitcoinCuba partnered with Chris Groshong, CEO of Coinstructive.com, a Cryptocurrency and Blockchain consulting firm based out of San Diego. As soon as I bought a Wi-Fi card from one of the kids selling them in the park, I sent Chris an email to go ahead and send Bitcoin in real-time to BitcoinCuba's public address. The $20 Chris sent from San Diego made it to Havana in a few seconds using Airbitz, a Bitcoin smartphone wallet with a fee of less than 1% . It was validation that the government run Wi-Fi allows for these types of transactions.

The main challenges with scaling Bitcoin in Cuba are the lack of education regarding digital currency and internet connectivity. Cuba has a dual-currency system; there is one national peso for mass use which Cubans are paid in, and a more valuable peso pegged to the USD known as the CUC in which most good are sold in. Although the government has talked about unifying both currencies, Bitcoin can be another currency thrown into the mix. There is going to be a need to teach individuals how this new currency works and its value, which is why BitcoinCuba is partnering with Coinstructive and other groups in the Bitcoin community to facilitate the educational portion as well as galvanize a community on the island that will hopefully learn all the ins and outs of Bitcoin technology.

However, in order for Bitcoin and information to thrive, Cubans need access to the internet. There is no other way around it. Cubans by and large don't have home connections, and access at hotels costs about $7 an hour, which is out of reach for most. The Wi-Fi parks with their $2/hour service is a start, but companies like Google, Facebook, Twitter, Netflix and Airbnb, all who have recently come out and talked about their interest in expanding their services in Cuba, can play an important role in helping to open up the internet for all Cubans.

FV: The power of digital currencies like Bitcoin lies in the ability to control your own money without any interjection from central banks, authorities or governments. Essentially everyone can become their own bank.

Bitcoin is a solution that will help the majority of unbanked Cubans finally tap into a the global market because it's almost effortless for a recipient to setup a Bitcoin wallet on their smartphone even if they don't have a bank account. In the case of Cuba, more people now have iPhones and Androids sent from families abroad than have bank accounts.

The real break-through for Bitcoin in Cuba, Latin America, and the developing world, is offering new ways of accepting payments and sending remittances where there is low credit card penetration and a reliance on cash. We are already seeing a disruption in the remittance market in Africa and Asia with companies like BitPesa and Bitspark. In Latin America, Bitcoin is making strides with remittance services, exchanges and startups in Argentina, Venezuela and Mexico. Because Bitcoin offers an instant and low-barrier solution, it will be a game-changer for Latin America.

CG: You mentioned you are Cuban-American. Many reports from the island note the emergence of a growing tech savvy entrepreneurship oriented community. Is there a role to be played by young Cuban-Americans such as yourself to collaborate with your counterparts on the island and help foster the growth of such a community? Does a desire to do so exist? If so, what kind of activities can facilitate such interactions?

FV: Bill Gates has said "when people are empowered, they will use digital technology to innovate on their own behalf." Cuban-American young professionals have the capacity to empower this growing group of tech savvy entrepreneurs in Cuba by establishing people-to-people connections and sharing their knowledge with them. During my trip, the digital entrepreneurs I spoke to are knowledgeable and hungry to learn even more.

My belief is that our generation of young entrepreneurs on the island and in the U.S. are not responsible for the political problems of the past, nor should we have it hanging over our heads forever. This is an incredible time in history where technology can solve many problems, and keeping politics aside, we should be in a position to help give young Cubans the tools and knowledge to innovate. I truly believe Bitcoin, blockchain and other digital technologies will be the tools used by Cubans to develop their own future.

CG: As a young entrepreneur with a grand vision, you are a role model for all of us seeking to turn our dreams into reality. Any parting words of wisdom or advice on how you've been able to do it?

FV: Being an entrepreneur usually involves a series of missteps before finally nailing the right idea. Most good ideas don't emerge from thin air, they involve a ton of thought and work to get it to be successful. Being persistent is crucial because what might initially seem like a misstep can derail a potentially good idea.

As relates to Cuba, the most important thing to do, as hard and impossible as it may sound given the political strife between both countries, is to remain optimistic and open. I'll never forget the reasons why my family was exiled from Cuba but I can try to forge a new future built on transparency and trust. It this happens, Cubans and Americans can mutually benefit from each other. I believe digital technology can help build powerful connections between people that have been separated politically. If our two countries are going to build a new relationship, our two tech communities should do so as well. I'm excited to see the innovations that will come when this happens.