I live in a special community. Although I don't have children of my own, I get to experience the joy of being surrounded by them all the time. Kids fill my days with fun, laughter and imagination. Unfortunately, they sometimes bring screams, cries and messes as well. 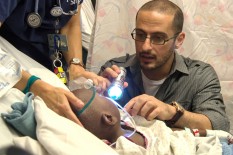 I live down the hall, as a member of the crew, from a pediatric ward on a hospital ship called the Africa Mercy. Africa Mercy is the world's largest non-profit hospital ship. We treat hundreds of children a year with specialist surgical care unavailable or unobtainable in the patients' native countries. Staffed by more than 400 volunteers, the Africa Mercy visits port cities along the west coast of Africa, providing free medical care to some of the world's most impoverished people - many of who are children that need surgical care.

Our work is necessary. Estimates show that every minute, eight children under the age of five die in sub-Saharan Africa. Two thirds of the under-five deaths in the African Region are due to preventable causes.

Once we admit the children we can treat, we bring them and their caregivers onboard. From that point on, the pediatric ward can be described as a playground, a circus or a sing-along, depending on what time of day you visit. It's a place where, even on the worst days, these children can bring a little bit of joy into your world, no matter what health issue they may be facing.

Emmanoel's story is just one example. When the two-year-old was brought onboard in the Congo, he didn't have much fight left in him. A tumor in the back of Emmanoel's mouth was blocking his airway to the point that he was passing out numerous times a day. His labored breathing sounded like a never-ending asthma attack. His eyes rolled back in his head as he teetered on the verge of consciousness. Watching him fight to breathe, and knowing that he could face death without the proper surgical care, filled me with indescribable anguish.

Over the last year and a half, Emmanoel's parents, Elodie and Maurice, sought out help wherever they could. At first, their infant son was misdiagnosed with malaria, but local doctors finally found the tumor. They said he needed an operation that they were not equipped to perform. At that point, Emmanoel was not expected to see his third birthday.

When Elodie and Maurice heard about a giant hospital ship that sails the coast of Africa, they didn't waste any time. Emmanoel had surgery onboard the Africa Mercy. Over the course of his recovery, I've seen him become a different child. Now he laughs, kisses, and can keep up with his spunky peers. He can finally speak, saying 'mother,' 'uncle,' and, fittingly, 'tomorrow' in French. Emmanoel can't say 'father' yet, but Elodie insists that Maurice doesn't mind. "My husband can sleep again," she says. Just knowing that his son is on the mend is all that Maurice can ask for. 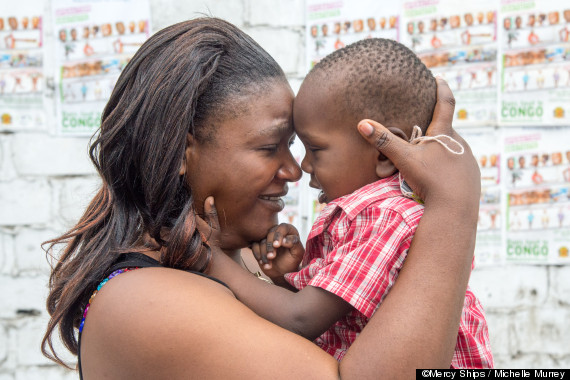 After recovering from his free operation on board the Africa Mercy, Emmanoel can now breathe easily and has a new lease on life. ©Mercy Ships / Michelle Murrey

Emmanoel will be turning three this month. This little boy gets to live thanks to Mercy Ships donors, volunteers, and partners like Johnson & Johnson. When I walk down the hall to visit my cute neighbors, there are still many more patients like Emmanoel. I see a ward full of children who haven't had adequate access to healthcare until now, and I feel very lucky to be a part of an organization that is changing the face of medicine in Africa, one patient at a time.

Mercy Ships is a global charity that delivers free health care in developing nations using hospital ships. For 20 years, Mercy Ships and Johnson & Johnson have partnered to deliver product and educational support for surgical programs operated onboard the Africa Mercy so that children like Emmanoel don't have to suffer.