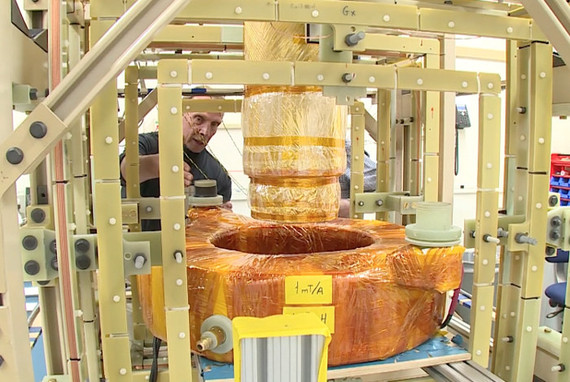 If you haven't had an MRI before, chances are you know someone who has. Magnetic Resonance Imaging (MRI) is widely used to create pictures of soft tissues in the body -- allowing doctors to identify anything from a torn knee ligament to a concussion. MRIs provide critical early diagnosis of potentially life-threatening injuries, yet their size and cost make them difficult to deploy to hard-to-reach places.

That's changing. At Los Alamos National Laboratory, we've developed a portable MRI, also called Battlefield MRI (bMRI), that uses ultra-low-field magnetic resonance imaging to create images of the brain that can be used in field hospitals for wounded soldiers or in remote villages in developing countries.

Our team wanted to see if images of sufficient quality could be made with ultra-low-magnetic fields, similar in strength to the Earth's magnetic field. To achieve images at such low fields, we use exquisitely sensitive detectors called Superconducting Quantum Interference Devices, or SQUIDs.

Want to learn more about portable MRI? Watch this video.

This approach has several advantages: It does not require a huge, powerful, potentially dangerous, and expensive magnet in a specially built, heavily shielded facility. Nor does it require extensive safety precautions to prevent any piece of iron-based metal from hurtling toward the magnet as a deadly projectile. And while the images created by ultra-low-field MRI lack the clarity of regular MRI, they still provide medically usable images of the brain.

Why, you might ask, is Los Alamos--a national nuclear security laboratory--investigating brain imaging? It's partly because the Lab has unique capabilities in imaging technology stemming from our research in ultrasensitive detection. Weak-field SQUID-based magnetic measurements excel at nondestructive testing--finding cracks and voids in materials used in weapons, for instance. That work supports our nuclear mission and applies to other national security problems, like bombs smuggled onto airplanes.

That's why the Department of Homeland Security called Los Alamos in 2006, after British police foiled a terror plot to sneak liquid explosives onto airplanes and blow them up. The police caught the terrorists long before they boarded a flight to New York, but the plot exposed a dangerous gap in detection. Airport-security x-ray machines easily spot dense objects, but liquids slip through and are difficult to distinguish from each other because they're all about the same density. DHS thought Los Alamos might have a solution.

We did. Making a few modifications to our portable, low-field MRI device, called MagViz, we tested it at Albuquerque International Sunport. It worked. It even won an R & D 100 award in 2009 from R & D Magazine.

Given our brain-imaging background, while we worked on MagViz we kept thinking about its healthcare applications. Here we had invented this little MRI machine you can pick up and move around, even in hostile locations. How cool! If it works in an airport, a web of interference coming from thousands of cell phones, radios, and microwave broadcasts, it will work anywhere--like in battlefield hospitals for the military or in poor countries that lack the funding or expertise to install and operate a full-bore MRI.

So far, so good. But the Achilles heel of weak-field MRI is interference. Lots of common things like cars, high-voltage power lines, and even Earth itself create magnetic fields. So the sensitivity of MagViz creates a challenge. We're now working on the simplest, lightest ways to shield the device from outside magnetic fields.

We'll soon overcome the remaining minor technical problems so we can get our low-field system out there where it's needed. For instance, soldiers in Iraq and Afghanistan have suffered many more traumatic brain injuries than those in past conflicts, yet field hospitals lack MRI because it's too big and difficult to shield in a portable building. And if a soldier has shrapnel in a wound, you can't put him under an MRI--the machine will rip the metal from his body. Those aren't problems with our portable low-field system. We joke it's the Ikea MRI machine--designed for easy on-site assembly.

The technology has peacetime uses, too. We've spoken with colleagues in Uganda who treat children for hydrocephalus--fluid buildup in the brain. MRI provides the best diagnostic tool and helps guide treatment. Unfortunately, Uganda doesn't have a single MRI machine or the expertise to maintain one. Instead, radiologists use x-ray-based computed tomography, which exposes children to way too much radiation. With low-field MRI, Ugandan doctors could obtain a sharp enough image to effectively treat these kids.

To complete the R & D circle, the refinements we make to low-field MRI for Third World medicine will also improve the usefulness of MagViz in maintaining global security, where it can save lives as a cheap, portable explosives-detection tool in challenging environments. With its wide range of applications, a little MRI machine can help make the world a better place, and there's no better outcome than that.