Bristol Palin, unwed teen mom of five-month-old baby Tripp, doesn't have time anymore to pursue her dream of becoming a nurse. But the daughter of the Governor of Alaska has managed to fit a glamorous cover photo session with People magazine into her schedule.

While it's doubtful that she received a million dollar payout for her cover model services, she's doing even more to make teen pregnancy seem glamorous than the former "Zooey 101" star, Jamie Lynn Spears!

She may not intend to encourage other teen girls to follow her example, but with her picture perfect looks and adorable baby son, she is absolutely now the poster girl for teen momhood. 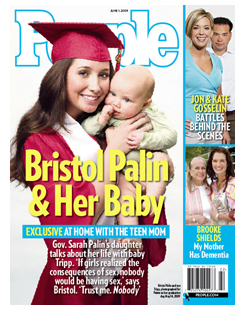 with dreamy full page photos, might as well be titled, "I'm 18, a mom and HOT...and you can be too!" There's not one photo of an exhausted, haggard, harried, unkempt-looking Bristol, reeling under the enormous responsibilities of raising an infant, working part-time — which she is — and hoping to somehow continue her studies. Instead, Bristol appears tanned, rested and already fitting back into her skintight jeans.

Visuals are a powerful force. And more than words, they produce visceral reactions! So while Bristol talks in the exclusive piece about how "girls need to imagine and picture their life with a screaming newborn baby," there's nothing in the People magazine spread to visually suggest that life isn't one big happy bed of roses in the Palin household, where Bristol and Tripp still reside. There's not even a dish out of place, let alone a pile of laundry or an unmade bed.

As a mom of two teen girls, I can hardly believe the fairytale crock the Palins have cooked up about unwed teen motherhood, with the help of People mag.

Here's the reality check: Bristol Palin, despite her affluent background and mega-family connections, is still becoming a typical teen mom statistic. While she managed to graduate from high school — which is rightfully celebrated in the piece, since less than half of teen moms manage to do so — she, like almost all teen mothers, is giving up on her pre-baby education plans. Bristol had set her heart on a college degree in nursing before baby Tripp came along.

Soberingly, she gave up that dream, she says, because she now doesn't have the time for a long course of study. Instead, she'll settle for enrolling in a local college and taking classes with an eye on a "possible career in real estate,",and even this will be dependent on her ability to get free babysitting from her dad, younger sister and other family members. So she's fitting right in to the depressing teen mom stat — less than 2 percent earn a college degree by the age of 30! Nothing glam about that.

Furthermore why should Bristol have to settle for giving up her life ambitions? Why did she end up pregnant anyway? If she hadn't had a mother who was a huge public proponent of abstinence-only sex education for teens, and who was a staunch anti-abortion advocate, would Bristol have felt less guilty and more active about using birth control?

The Sarah Palins of this world, who insist that the only OK birth control for unwed young women should be abstinence, 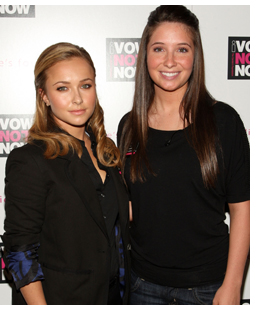 are exacting a heavy price on those girls who fall off that unrealistic wagon. Her husband Todd admitted to People that he never talked to Bristol about sex or birth control. "She had enough information out there," he claims.

So now, the Palins are fabulously dressing up their daughter's situation. After all, the Gov. has her eye on a future White House run.

There's only one moment in Bristol's People interview that actually sounds heartbreakingly real. She admits that she skipped her prom — " I don't have that kind of time. And the dress is, like, $400, and the shoes, hair, makeup, it's way too expensive."

Wow. Her mom enjoyed a free $150,000 wardrobe and $50,000 worth of makeup during the presidential campaign, and she wouldn't babysit and fork over the money to get her daughter a dress for a once in a lifetime prom.

As Bristol admitted, "It kind of sucked, to tell you the truth!" Yeah Bristol, you're right and no glossy People magazine article can make up for the fact that being a teen mom sucks.

Too bad most girls who look at you on the newsstand will get exactly the opposite impression!

Photo above: Bristol with Hayden Panettiere at a teen pregnancy forum in New York, Getty Images.

Update, May 27: Watch me discuss this post with David Shuster on MSNBC: