Brit Marling first got the idea for the new eco-thriller "The East" four years ago. She just didn't know it then. It was 2009 when Marling and director Zal Batmanglij decided to travel around the country for what Marling calls an "adventure."

"We had been reading a lot about the anarchist movement and freeing collectives. The ideas were so interesting," Marling, 29, told HuffPost Entertainment. "I remember reading an anarchist manifesto online that was so beautifully written and so impacting and it had no byline. They just did not care about credit or ego or vanity. It was just about sharing ideas. I was like, 'Who are these people? I want to know these people.'"

Marling and Batmanglij spent the summer of 2009 doing just that, sleeping on rooftops, train hopping and meeting with anarchist collectives. By September, they were back in Los Angeles, where they decided to turn their experiences into screenplays. The pair co-wrote "Sound of My Voice" and then later, "The East." (Marling also co-wrote "Another Earth" with Mike Cahill; Batmanglij, their friend, received a "special thanks" credit.)

"It felt like the things that these people had been thinking and feeling had become more prescient and more important," Marling said of the time lapsed between that summer and their newest film. "We had the idea of what about making an espionage thriller and setting it in this landscape."

The result is a film that stars Marling as Sarah, an undercover agent who must infiltrate a group of eco-terrorists (played by Alexander Skarsgard and Ellen Page among others) hellbent on getting revenge against the greedy corporations that are slowly poisoning the planet.

HuffPost Entertainment spoke to Marling about the new film, how she feels about her status as a former Sundance Film Festival It-Girl and whether she'll ever write her own romantic comedy.

This film does a good job balancing between the anarchist movement and the authorities, as embodied by Patricia Clarkson's Sharon. Was it hard to keep things even? It wasn't that hard because I think we feel that. That's the difficulty of where we are right now. There are good and bad ideas and people and situations on both sides. What's funny is that The East is totally made up, obviously, but the corporate crimes in the film are not. They're pulled out of the headlines. The BP oil spill. There was a special on PBS about this class of pharmaceutical drugs called Fluoroquinolones, which a lot of people were having really adverse reactions to. Or the New York Times piece about the kids living in a town where all this arsenic ends up in their water from a coal slurry. So when you're taking in all these stories, I think whether you're on the Right or the Left or so extreme that you're not even on the spectrum or somewhere in between, everyone feels a bit frustrated. The East is a bit of wish fulfillment, in a sense that everyone feels a little like, "Yeah, go dump the oil in the CEO of BP's backyard. Let them feel like what that would be like." It's interesting to see the response to this movie. There's no easy bad guy. There's no villain.

Do you find it a little ironic that Fox Searchlight, which is owned by Fox, which also owns Fox News, is releasing the film? I love that you're saying this because this is a great example. It just so happens that Fox Searchlight is filled with brave, innovative, risk-taking people. [Fox Searchlight executives] Nancy Utley, Steve Gilula, Claudia Lewis -- everyone there. They're continually making and buying and distributing all of the most provocative and interesting films. So, yes they're a corporation and a corporation that's part of an even larger corporation. But what they do is reflective of the people they are. This isn't a movie about corporate villainy. That's way too black and white. There are plenty of corporations doing incredible things in the world. It's a movie about how the conversation we should probably be having is so much more refined and careful. It's not like we can just throw it all out and start from scratch. It's about trying to make it work better than it's working now. Because it's failing a lot of people.

You have said you started writing scripts because the parts you were getting offered weren't that fulfilling. Have you seen a change? There's definitely been a change. I've been really fortunate to get to read or audition for or be offered parts that really excite me. I started writing because I wanted to be an actor and act in stories that I felt mattered. I wanted to play women that I thought we weren't seeing very much in the cinematic landscape. Getting to do "The Company You Keep" and to work with Robert [Redford] and learn from him; or making "Arbitrage," and seeing that the heir to [Richard Gere's] empire is his daughter instead of his son -- these are all provocative and interesting stories. I realized, however, that I don't want to give up writing either. As much as I want to act in other people's stories, first and foremost, I get a lot of pleasure out of writing. I think writing is a good way to make sure you can never get pigeonholed. At the moment people want to be like, "Well, now, here are all the scripts on corporate spies with a good heart and conflicted feelings." You know you're going to get sent a ton of those, so it's like, "OK, now I'm going to write something where I'm a dominatrix."

Would you ever want to do a romantic comedy? It's so funny you bring that up. I did this talk at Georgetown's graduation and Zal was there and so was my manager and they were like, "Gosh, you are so funny! Why aren't you doing more comedies?" I was like, "I am funny. I need to do more comedies!" So maybe I'll try to write a romantic comedy. I feel like that in my life, I find a lot more humor in things than I do sadness. I'd love to do comedy. I'd also love to explore women and the question of how women are sexy and charismatic, but also in possession of that. How do you do sexy that's not the object of the male gaze? How do you do sexy that's in control? There's all kinds of landscapes that I'm curious about for women. Most stories, predominantly through time, have been from the perspective of men about women or how men see women. Which is interesting. But it's nice that we're getting a balance and we're starting to see how women see women, which is exciting. I think that's why "Girls" or "Bridesmaids" have resonated with people. Because it's a new point of view.

At the 2011 Sundance Film Festival, you were a breakout star. Looking back, do you feel that was a good thing for your career? I think Sundance is an amazing institution. When you try to think about where independent cinema would be without that festival, it's impossible to imagine. It's pretty much responsible for 20 years of amazing independent cinema. A lot of those voices have gone on to become more mainstream, but I think without that festival there's no way that I would be working in the capacity I am now. Or that I'd even have the option to make a living as an actor or a writer. That experience was tremendous, because you're making all this work in a vacuum and suddenly it enters the world and you feel like, "Oh, I can do this." Then, after that, it just becomes about keeping up with the opportunity. You feel so grateful because you've struggled for so long. You recognize in the struggle that for every person who has a breakthrough moment at Sundance, there are 100 other people of equal talent or ability who didn't get discovered that year. It makes you feel like you have to work really hard to be worthy of the chance that you've gotten to create work and have that work connect with people. You don't take it lightly. You really feel like you have to consciously and constantly earning this.

Like Matt Damon at the end of "Saving Private Ryan." "Earn this." Yes, exactly. Yes!

PHOTO GALLERY
Brit Marling in "The East"
Download
Calling all HuffPost superfans!
Sign up for membership to become a founding member and help shape HuffPost's next chapter
Join HuffPost

Brit Marling, 'The East' Star, May Start Doing More Comedies: 'In My Life, I Find A Lot More Humor In Things'
Brit Marling in "The East" 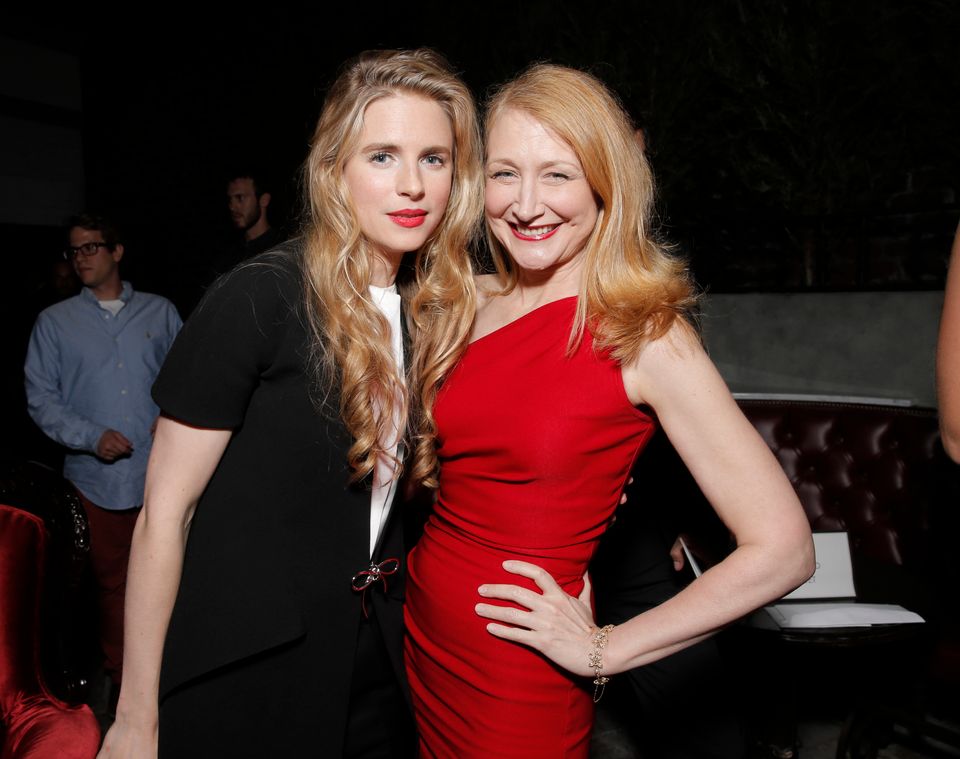