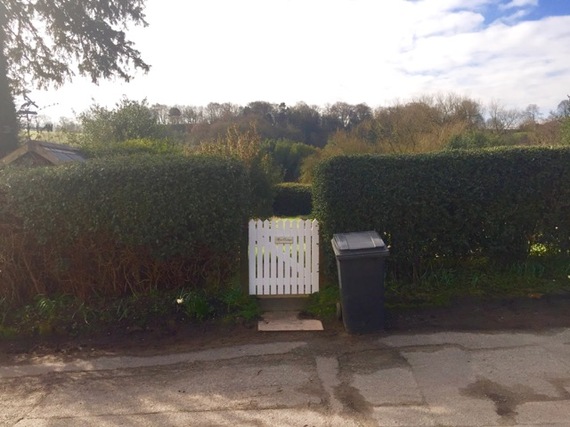 My one lonely black bin...

My wife and I live two lives.

We split our time between living in New York and living in Britain.

In New York, we live on the 33rd floor of a glass high-rise in Midtown Manhattan.

In Britain, we live in a tiny village of perhaps 20 houses, a village church, a pub, rolling green fields, sheep, cows and dogs.

But this is not about verdant green versus steel and glass. This is about trash, (or rubbish, as the British call it).

In Manhattan, any garbage that we amass magically disappears down a chute. No matter how much trash or garbage or rubbish you create, it just goes away. Like magic.

In our small and charming village of Dale Abbey, we have a bin. One bin. A black bin. The bin is for all household trash. We also have two brown bins, they are for garden wastes. (This alone should give you a sense of priorities around here). The village Parish Council collects and empties our bin once every two weeks. That's it.

That means that you are effectively limited to the amount of rubbish you can create per household to the volume of the one bin. No second bins allowed.

And but one collection each fortnight (that would be once every two weeks). That's it.

As a result, I have become remarkably conscious of the amount of trash, or refuse, or rubbish that accumulates simply as a result of day to day living.

For example, every time we go to Waitrose to buy, blueberries, let's say, the blueberries come - a handful or two - packed into a plastic container, wrapped in plastic wrap, and, if you are so wasteful, stuffed into a plastic bag. They also have a cardboard wrapper around them that says 'blueberries', (in case you could not figure out what they were).

And that's just a punnet (that's what they call it) of blueberries.

Add to this raspberries, crackers (multi-seed), strawberries, yogurt, tomatoes, (we eat healthy around here!), on and on and on, and you start to get the idea of the massive amount of incredibly wasteful (and completely unnecessary) packaging material that accompanies every single food purchase. Who ever noticed before?

I am sure the same kind of packaging goes on in Manhattan, though to be honest, I have never before been so cognizant of it. So long as I could make all the rubbish disappear whenever I wanted via the magic portal down the hall, who cared?

Yesterday, we had a village meeting. There were 61 people there - practically the entire population of the village!

There were several topics up for discussion. Was the Royal Mail going to close down our post box? (Use it or lose it, we were told. Another casualty of email, I suppose.) Lorries driving through the village! ("I got a photo of one on my phone," one of my neighbors announced with pride. "I'm going to show it to the police!" We have no police force in our village.) The appalling speed of our local internet (1.4 MBPS on a good day).

As the meeting drew to a close, the chairman asked if there was anything else to discuss.

Being the new person in the village (anything fewer than three generations is considered new), and the only American, I was reluctant to raise anything, but the whole trash thing has bothered me for some time. (My garage is accumulating black plastic bags awaiting their turn).

Rather than make a fuss (very un-British!), I tapped my neighbor and asked about the idea of possibly discussing the ideas that we might... might.. either have rubbish pick ups once a week instead of every other week - or... we might possibly, if it wasn't too much trouble... have a second black bin.

She looked at me as though I was an idiot.

"The whole point is to make you think about the rubbish you are generating."

"We want you to think about recycling and consuming less."

I asked her how I was supposed to do that.

Apparently, there are blue bins. They are for glass and plastic. I could get one of those.

And you can put your food waste into the garden waste bins.. "or start a compost pile".

Well, I do have a pretty substantial garden, though my neighbor graciously manages it in exchange for all the tomatoes, runner beans, raspberries and other stuff he and his wife can consume. Eddie Albert I am not.

"And," she added, rather contemptuously I thought, "you can stop shopping at Waitrose (the Whole Foods of the UK), "and go to the farm shop where you can get all the fresh produce you want without the plastic."

She had a point.

In New York we were never really faced with the byproduct of our society - and it's quite an astonishing volume for just the two of us.

I might even start bringing my own string bags to the Whole Foods store at the Time Warner Center... except Fresh Direct is so much more convenient.