Britain has survived many wars, the reign of King Edward II and the end of the Spice Girls. Now, British government officials want the world to know that in the event of a zombie apocalypse, they've got it covered.

Details about Britain's plans in the aftermath of a zombie apocalypse were revealed in a tongue-in-cheek response to a Freedom of Information request, according to The Telegraph.

In the event of an apocalyptic incident (eg zombies), any plans to rebuild and return England to its pre-attack glory would be led by the Cabinet Office, and thus any pre-planning activity would also taken place there. The Ministry of Defence's role in any such event would be to provide military support to the civil authorities, not take the lead. Consequently, the Ministry of Defence holds no information on this matter.

This is not the first time U.K. officials have responded to inquiries about a possible zombie apocalypse.

In June 2011, the Bristol City Council detailed specific plans on how to prepare for a zombie attack following a separate Freedom of Information request, according to the Guardian. The "top secret" document detailed four alert states based on the spread of zombie infection. In addition, it designated the most at-risk towns, suggested following television and radio broadcasts to avoid "widespread panic"; and detailed the correct zombie-killing procedure ("Fully disconnect the brain-stem from the body through either blunt force or full head removal").

In the United States, HALO Corp. announced it would train military and law enforcement for a zombie apocalypse as part of an annual counter-terrorism summit. The Centers for Disease Control and Prevention (CDC), which has denied the existence of zombies in the past, has its own "Preparedness 101: Zombie Apocalypse" campaign, explaining what items to stockpile, how to come up with an emergency plan and how the CDC will respond.

The CDC has used the platform to educate and engage the public on all hazards preparedness. "If you are generally well equipped to deal with a zombie apocalypse you will be prepared for a hurricane, pandemic, earthquake, or terrorist attack," Dr. Ali Khan, director for the Office of Public Health Preparedness and Response, said. 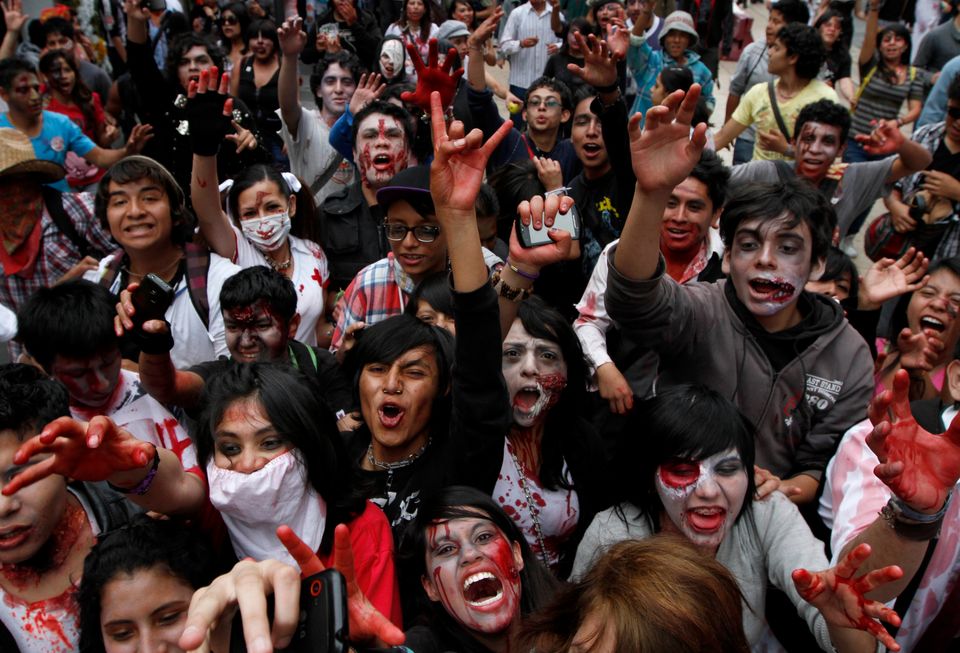 1 / 20
People dressed as zombies react to the camera during a Zombie Walk in the main Zocalo plaza in Mexico City, Saturday, Nov. 3, 2012. (AP Photo/Marco Ugarte)
AP