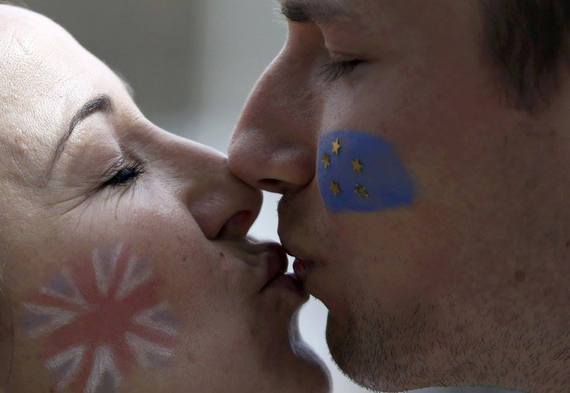 Thousands break the world record for the longest kissing chain, at over 400 people, in a show of love and unity between the United Kingdom and Europe, ahead of the EU referendum on 23 June. Photo credit: Rob Pinney/Avaaz

A HISTORIC question faces the British people this week, a choice about the survival of Britain itself, and the values that have made it great.

To see this choice, we first have to wade through a thicket of arguments designed to obscure it. Claims that the UK is burdened and shafted by the costs of EU membership, or that leaving free trade with the world's largest economy won't have an adverse effect on jobs and the economy, seem disingenuous to all but the most ideological.

Bashing the so-called bureaucratic tyranny of Brussels also seems suspect. Absolutely no one holding any power in the EU is not either directly democratically elected, or appointed by and accountable to someone who is. And in that European democracy, the UK has won 98 percent of the votes that have been taken. Try getting a Brexiter to explain where, exactly, the UK has been so oppressed. As a democracy campaigner, I frequently go up against the EU, but less often than national governments. Corporate interests have too much power in both.

So these common arguments for Brexit seem largely made in bad faith. The real driving force of the Leave campaign, and the centre of the historic choice to be made -- is immigration. That is the area of policy that the leavers are most keen to control, the one, if they're honest, they're willing to risk massive job losses to gain.

There is also a disingenuous case on immigration, which amounts to transparent scapegoating. As in almost every country, the far right wing is blaming immigrants for the economic insecurity that their own policies are responsible for creating -- policies, for example, like Brexit. Policies that will only get worse when Brexit ushers Prime Minister Boris Johnson into 10 Downing St.

But many leave campaigners are more honest and open that this vote is significant because it's the "last chance that Britons will have to decide the future of Britain". By Britons, they mean people that are ethnically, well, mostly English. Immigration has and will change the face of the UK. Many, especially older white men, are uncomfortable with that. If anything, that is the honest, straight up choice in this vote. Is England for the English? An ethnic state? Or is England part of the UK, a modern civic nation that embraces Europeans, and people of any background that choose to live by our laws? 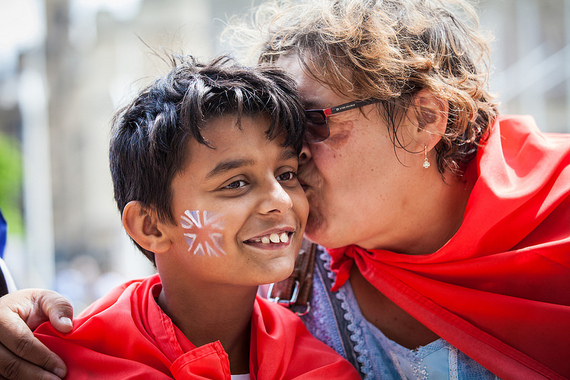 Thousands break the world record for the longest kissing chain, at over 400 people, in a show of love and unity between the United Kingdom and Europe, ahead of the EU referendum on 23 June. Photo credit: Rob Pinney/Avaaz

This is partly why, while not all Brexiters are racists, all racists are Brexiters. Some white Americans are facing the same choice as they see themselves being outnumbered by minorities in coming decades, and are turning to the Brexit of the U.S., Donald Drumpf, to deliver them from that fate. Britain doesn't need to build a wall; Brexit promises to build a border.

I understand how the leave campaign's fear-mongering on this could resonate -- I don't want the world to become an airport, a mish-mash melting pot with no discernible linguistic or cultural differences. It seems that great value would be lost, and that comes from someone who is, literally, a mish-mash myself.

But we don't need to fear that future, because it is possible to be British and be any color, or have any background. Just like someone from Leeds or York has a specific identity that is part of a larger British identity, so can someone be from Wembley, like my family, and have an Indian identity that also fits well within a larger British identity.

England chose long ago to opt for the creation of Great Britain. But if England chooses now to depart from these values, and leaves Europe, it will almost certainly trigger another Scottish referendum, and there is a decent chance that Scotland could leave. It could be the end of Britain.

England can turn back on this road that it has led humanity down. It can turn away from Great Britain to become little England: small, weak, and white. But that has never been the dream of the English, or the British. It is not now the dream of any of Britain's major political parties or leaders. It is only the dream of a few populist xenophobes, buoyed by a few small minded newspaper editors and owners of the Mail and the Sun, especially Drumpf-loving American Rupert Murdoch, who have whipped up anti-government and anti-immigrant hysteria with lies and propaganda.

Great nations do wither and die -- this could be the story of next week. But I have hope that Britain will remember itself before the end. The leave campaign is right -- after next week, the door may be forever closed to their small mindedness, their backward views on what this country is about. What they don't see is that that door has long been closed. And that is what has made Britain, great. Long may it ever be so.