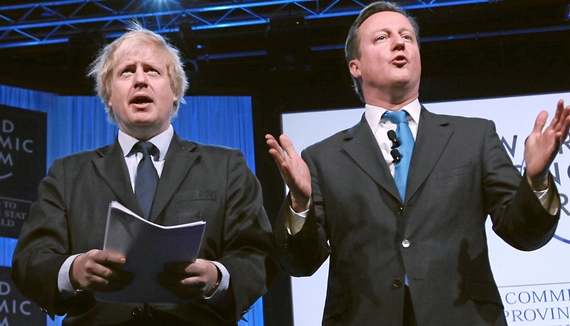 England's problem is English: the language it gave to the world.

In particular, it's a problem because so many people in the world speak English and would like to live in England, maybe hundreds of millions of them. "We are here because you were there," says a sign held by an India-born woman at a demonstration. The British Empire isn't all wound up.

The immigrant stream into England has two principal sources. One stream is from former British possessions, like India, Nigeria and Pakistan. These immigrants are English speakers. In England, they'll have medical care, welfare, and law and order -- and it's where they feel entitled by history.

The other immigrant stream is from Eastern Europe. These immigrants enter England under the terms of the United Kingdom's membership in the European Union. They want to live and work in England for economic reasons. Once there, they tend to stay and live in expatriate communities.

London, the great sprawling metropolis along the Thames River, is now home to 50 expatriate communities, each with more than 10,000 members. More than 300 languages are spoken in London. According to the 2011 census, 37 percent of the city's population wasn't born in Britain. If the United States during the late 19th and early 20th centuries was a melting pot, London is that and even more so today.

The UK immigration problem is primarily an English problem. It's not a Scottish, nor a Welsh, nor a Northern Irish one. England and London are where the immigrants head. Accommodation is at a premium in London, and the situation is getting worse with property speculation an industry in itself.

But immigrants nesting in London isn't just a problem of migration. It's also a problem of population density for England. The capital bursts at the seams as the north of the country languishes. Think booming Washington D.C. and hurting West Virginia, so close and so faraway.

The immigration problem is one of two issues that dominate the run-up to a June 23 referendum on whether Britain should stay in the EU. The second issue is of sovereignty, and the belief in Britain -- mostly England - that Brussels, the seat of the European administration, is setting up rules and regulations that are untenable.

British Prime Minister David Cameron favors Britain staying in Europe with greater control of its borders and freedom from some Europe-wide mandates. Many members of his Conservative Party want out, including about half of his cabinet. Industry wants in by and large, as do professional groups and the important financial sector.

But the desire to leave Europe, known as "Brexit," may be gaining with the support of Boris Johnson, London's popular mayor. Polls have "in" just ahead of "out" and closing.

Pulling out has ramifications for the very integrity of the United Kingdom. Feeling against Europe is very much an English phenomenon and isn't shared in Scotland, where calls for new referendum on its future as part of the United Kingdom will surely follow a vote for Britain to quit Europe. The last vote in September 2014 went against Scottish independence, 55.3 percent to 44.7 percent. Since then, the nationalistic feeling in Scotland has grown, and Scottish nationalists favor membership in Europe. Wales seems to want in.

Britain's immigrant problem is more severe than ours in the United States. The population stands at 64.9 million and is rising. The island is 600-miles-long and 271-miles-long at its widest point.

It is one small island that has always left a large imprint on the world, and left its language as its lingua franca. It's troublesome in today's world of shifting populations, when hundreds of millions think of you as the mother country. -- For InsideSources