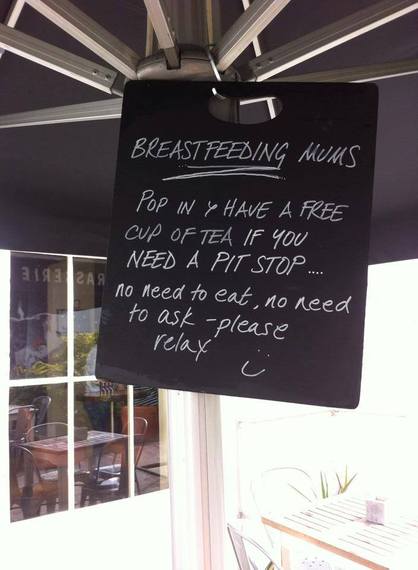 I love the simplicity, the hurried writing and the little smiley at the bottom. I love the Britishness and most of all, I love the message.

This is a chalkboard hanging outside of a café in the south of England, that proudly and reassuringly supports breastfeeding mothers, because in all seriousness, breastfeeding is thirsty work.

In addition to the exhaustion, near-dehydration and actual munchies that so often accompany a breastfeeding mother on any expedition into town, there are often times when worry comes along for the ride...

Will I see a sneer of disapproval after finding a seat at a café and unhooking my nursing bra?

Will I hear a "tutting" noise as my baby roots for milk?

Will I feel a rush of adrenaline instead of oxytocin, as eyes burn holes into my back and the tutting gets louder at the very thought of the minuscule amount of areola that's actually on display?

In the UK, it's illegal to discriminate against a breastfeeding mother, but this café has taken the idea of acceptance to a whole new level.

They are waving the flag, raising a glass (of milk) and supporting breastfeeding with cute smileys and magical words like relax.

Let's just hope that the mothers who frequent this cafe are feeling refreshed after such refreshingly uplifting and supportive words. And let's also hope that the 'sneerers', 'tutters' and general 'disapprovers' take note of the overall message... because really, it's all so very normal.

After all, it's just a boob...relax

Are restaurants and café's breastfeeding-friendly where you live? Join the conversation with Mama Bean on Facebook and Twitter.

CORRECTION: A previous version of this post incorrectly listed the name of the town the photo was taken in as Cheltenham.