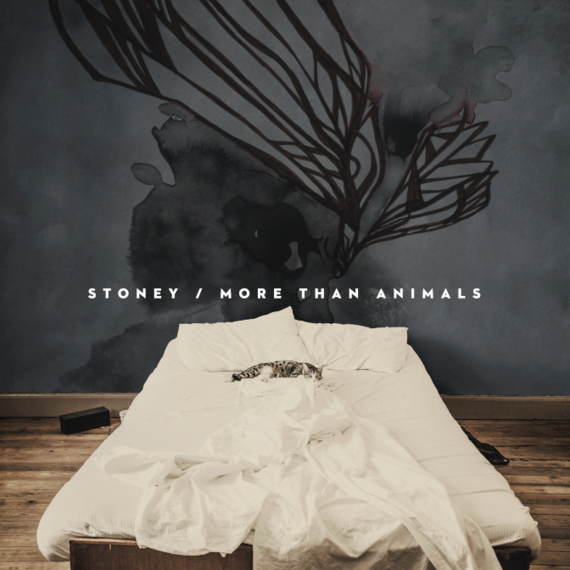 For fans of the UK underground music scene, Mark Stoney is a familiar name. He's known for his distinctive songwriting talent of the critically acclaimed and somewhat enigmatic multi-instrumentalist has been held in high regard among many in the know on both sides of the Atlantic for some time now, and his long awaited return with new album "More Than Animals" demonstrates Stoney's natural British pop sensibilities refined with profoundly intimate lyrics and soaring melodic arrangements that burst with passion, personality, and depth.

The album starts off strong and continues to deliver throughout. There is definitely a pop/rock presence in addition to commanding vocals by Stoney and bandmates. It's a strong and pleasantly overwhelming sound in each track that keeps the listener engaged. Each track has it's own sound but consistent of the theme of the album.

The track "We Belonged" quickly reminds you that this still has a British influence, and that's a welcomed sound for this genre in the US as at times bands begin to sound alike. Stoney has a unique sound and in this particular track, his vocals are soothing and relaxing. Two tracks later, with "House of Mirrors", the sound takes a huge elevated leap back to what the album started with. And then mellows back out with "Bedpost".

It's an interesting roller coaster of sound that is delivered with "More Than Animals". It has the consistency of superb vocals and a kick-ass band to back them up.

Now a transplant in Austin, Texas, Stoney was raised the son of a preacher in the UK's South London suburbs before drifting up north to Sheffield, where in his musical infancy he became a key figure as a performer and producer in the Steel City's blossoming music scene, later labelled as the "New Yorkshire Movement" by the NME. Stoney's keen ear for classic pop melody combined with a sharp lyrical potency and rare ability to effectively blend genres from folk to soaring rock to trip-hoppy-electronica earned him a loyal following in the city that spawned such acts as Pulp, The Human League and Arctic Monkeys to name a few.

Despite his growing success, Stoney, true to form, cut an elusive path and decided to up-sticks and cross the pond to Texas, following a performance at the world renowned SXSW festival. Citing a need for "sunshine and change" he set up home and studio with a small community of "quirky poet and painter friends" in an old creaky house in Austin to work on new material.