Via Gawker, we learn that the decline of Britney Spears is the subject of the highbrow academic treatment in the latest Atlantic magazine, after Rolling Stone's blockbuster piece last month about the fallen pop princess. Also pillaged from Gawker, a sample paragraph:

In the dark sewer of misanthropic, gynophobic, and Rabelaisian epithets running through the comments section of celebrity blogs, one can also find gems of authentic emotional connection to celebrity foibles... A good number of readers seem to write in the openly delusional... belief that if their post is sincere or hateful enough, the walls separating their own lives from the lives of celebrities will dissolve, transporting them from the backlit world of their LCD screens to the super-pollinated atmosphere of the media daisy chain.

Yes, yes, that's very smart. Also, familiar for anyone lurking on these internets who were fans of one Andrew Hearst's magazine mock-ups. Hearst loved playing with the form, and the most classic of his covers was his rendering of an Us Weekly as Harper's, the small, spare font lending new gravitas to questions like, "Brad Wants Jen Back — But Can She Forgive Him?" and "How Jessica's Staying Skinny" (see, this was a while ago - predated Brangelina entirely). In this latest Atlantic comes the realization of that once-imagined notion of the perfect union of highbrow and lowbrow (and also, as Gawker's Ryan Tate rightfully points out, the commodification of Lindsay Lohan's naked breasts. Tate notes that these starlet-based magazine features have been huge traffic drivers; I submit to you that now I have a legitimate reason to tag this item with "Naked Lindsay Lohan."

At any rate, peruse Hearst's oeuvre if you can, the covers hold up (so well that his employer since they were created, Vanity Fair, commissioned him to do special versions for the magazine). My particular favorites are from his New York Review of Books spoof, — "Joyce Carol Oates on 'America's Next Top Model'" and his Esquire spoof, "Jessica Simpson Has A Cold (Also, A Giant Rack)." Yay — now I get to tag this with "Jessica Simpson's Rack." 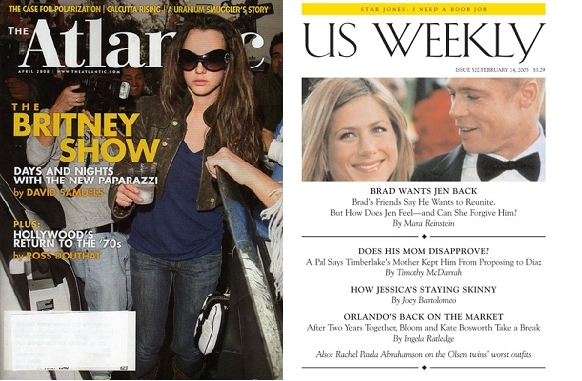 Everyone Officially A Tabloid Or About To Become One [Gawker]
Panopticist: The Magazine Covers [Panopticist]