Star has published a second story accusing Ashton Kutcher of cheating on Demi Moore (scroll down for cover photo), and again Ashton's camp denies it.

A couple of weeks ago the magazine accused Ashton of groping and kissing a hot young blonde in a restaurant. Now a 21-year-old brunette has sold her story of couch sex with Ashton in the home he shares with Demi and her daughters.

Brittney Jones tells Star she met Ashton when he, Demi and Rumer were bowling next to her at Hollywood's Lucky Strike in July. She slipped him her number on a napkin, she claims, and he began texting her things like, "R U busy?"

"I did all the suggesting in the texts, it was like he was paranoid and didn't want to text anything that would get him in trouble," Brittney said. "I asked him if he wanted to meet, that's how we made the plans."

Soon they met for sex, she claims, (on the couch as Ashton disallowed the bedroom) while Demi was out of town.

"He's a great lover," Brittney said. "Very considerate and sweet. And it was very special to me. I felt totally comfortable in his arms. It was tender and nice--not some random sex act."

Ashton's lawyer said in a statement to Us Weekly: "Star Magazine continuously publishes lies about Ashton Kutcher and many other celebrities. This is not the first, nor will it be the last time they engage in reckless conduct."

Last time Star accused Ashton of cheating, he defended himself on Twitter.

"I think Star magazine calling me a "cheater" qualifies as defamation of character. I hope my lawyer agrees," he wrote. "STAR magazine - you don't get to stand behind "freedom of the press" when you are writing fiction." 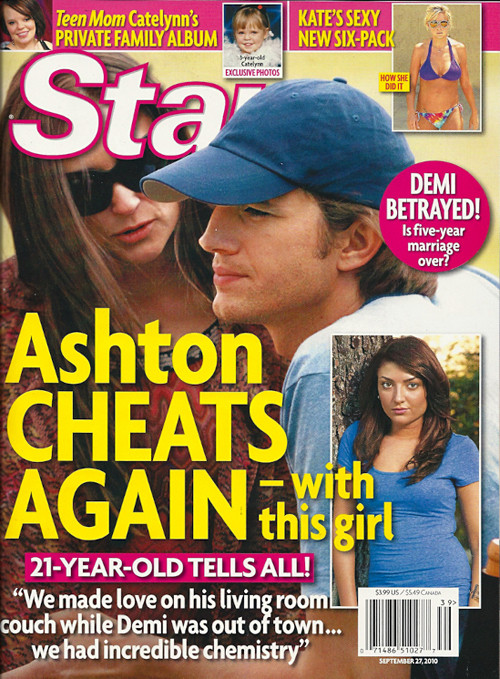