UPDATE: Brixx has posted a statement about the incident on their official Facebook page. Scroll down to read it.

CHARLOTTE, N.C. - A North Carolina waitress is out of a job after griping on her Facebook page about the $5 tip she got from a couple who sat at their table for three hours. The waitress says the customers kept her at work an hour after she was supposed to clock out.

The Charlotte Observer reported Monday that 22-year-old Ashley Johnson felt slighted after waiting on the couple at Brixx Pizza.

So she blasted the couple on Facebook, calling them cheap and mentioning the restaurant by name.

Brixx officials told Johnson a couple of days later that she was being fired because she violated a company policy banning workers from speaking disparagingly about customers and casting the restaurant in a bad light on a social network.

Johnson says she has apologized to Brixx and is looking for a new job.

Brixx's decision to fire Johnson over the Facebook offense didn't seem to be winning them any fans. All of the comments by users on the company's Facebook page are negative.

The critical comments appeared on Brixx's account soon after the Observer published their story about Johnson's dismissal.

Brixx has now posted a statement about the incident on their Facebook page. The company's response was posted at 2:34 p.m. EST, Monday, May 17:

Brixx Wood Fired Pizza Brixx appreciates your feedback! Please know we value our employees very much, which is why we are one of the few small restaurant companies that offers benefits. Brixx also values our customers and has a policy against making negative remarks about them.

As an employer, it is necessary to enforce policies for the benefit of all our hardworking employees and valued customers. Our policies ensure Brixx is an enjoyable place to both work AND dine. We welcome your comments, but please keep it clean!

A sampling of the comments on Brixx's Facebook page on Monday morning: 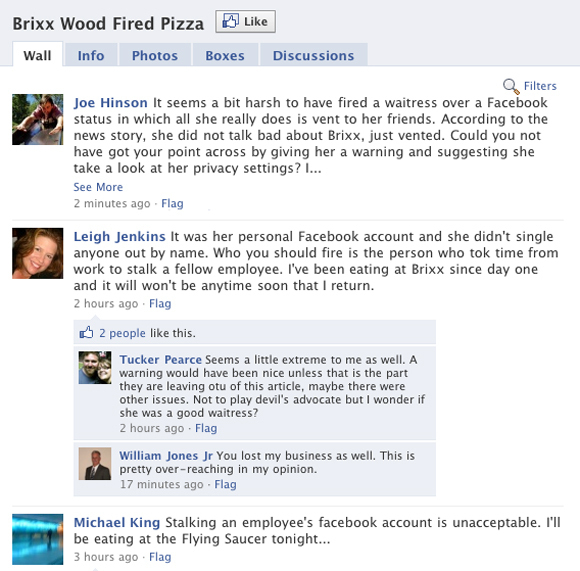