On Sunday night, 92Y in New York hosted actor Amy Ryan, of Holly on "The Office" fame, in conversation with Abbi Jacobson and Ilana Glazer, the creators and stars of "Broad City." During the talk, Jacobson and Glazer firmly cemented their status as your two dream BFFs while they candidly discussed the show, their process and how they felt about their characters as role models.

Here are 5 things we learned about "Broad City" during the chat:

1. Their onscreen apartments are inspired by real-life former pads.

"I lived in -- actually, my first apartment in New York was the apartment we are portraying on the show," said Jacobson, who lived in Astoria, Queens, for five years. "It’s very similar to what we show on the show." Before you ask, she did have a roommate, complete with a boyfriend who "sort of lived with us for awhile."

Glazer was south of Jacobson in Brooklyn, a "totally annoying" friend commute that they'd like to portray on the show at some point. "My first apartment after college was in Brooklyn. It was actually in Gowanus-Sunset Park, also in the show."

And while they aim to portray a young New York experience that's true to life, Abbi and Ilana's apartments on the show are bigger for good reason. "When we started the show, we were like, ‘These apartments need to be tiny!’" Ilana said. "And it’s like, you don't … you smell camerapeople's genitals."

"The Gaga thing didn’t come up until after we had written all the scripts," said Jacobson, describing the lengthy process that goes into script writing: A season of "Broad City" takes around nine months to conceive, write, film and edit. "It came up when we were looking for where we could put in new songs," she explained.

And it's more than just a memorable, goofy scene. It's indicative of the attitude of the show and its creators. "Those are the moments, the big moments, you want in life," said Jacobson. "And we get to just have them on the show."

3. The show was once destined for FX, and the two main characters had different names.

When Ryan asked if Jacobson and Glazer had trouble settling on the name "Broad City," both said no. But their eponymous characters weren't always known as Abbi and Ilana. "For a teeny little bit, [when] we wrote the script with FX first, and we had different names: Carly and Evelyn."

After some time, though, it became evident that the show -- on Comedy Central, where it ended up -- was stronger with their own names.

"We knew that it did need to be that, but it was like, (sighs). That's our names. But it was totally right," said Glazer.

4. There's one food item Jacobson has yet to try.

"I've never eaten a hamburger," she reveals to the audience before being met with a collective gasp. The meat-eater rite of passage simply hasn't happened for her, but it's not off the table. "I think it's a fun thing to throw a party and do," she continued, noting she might put the grand event on the show.

Does this mean the hamburger drawing purchased by Ilana in Season 1 (and drawn by Jacobson herself) was based on speculation alone? Impressive.

5. There's a fine distinction between a "queen" and a "badass bitch."

Ryan asked the two to explain, and Glazer put it perfectly: "You know how like, a square is a rectangle but a rectangle is not a square?"

One encompasses the other, but "'a badass bitch' has other levels of the game." Now you know. 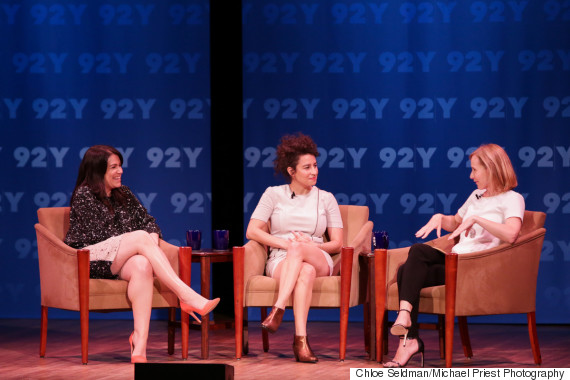 "Incredible as the reception is, it’s a bummer that it’s such a shock," said Glazer of the response to having a show that centers on a supportive female friendship.

Aside from providing a platform for a friendship between two women that's not based on boys or backstabbing, they offer a relatable mirror for the everygirl. "A lot of people are like, ‘These women are imperfect,’ and that’s a different kind of role model, to let women know that they don’t have to be these perfect versions of themselves."

Plus, that imperfection can pay off. When asked what advice she'd give to her former self, Jacobson answered, "I don’t know if I would tell her anything, because I just use all the shit she did." The crowd broke out in another audience-wide laugh. "Thanks, bitch."