Abbi and Ilana are back, y'all, and we couldn't be happier. "Broad City" returned for its second season on Wednesday night with another day of the girls' crazy, stoned New York City adventures. HuffPost Entertainment editors Jessica Goodman and Erin Whitney discuss the hilarious season premiere (which was admittedly just as funny on the second and third watch).

Jessica Goodman: Erin! All I want to do at this very moment is talk about "Broad City" Season 2, because it's back. Baby, it's back! After months without pussy weed, Abbi and Ilana are here to tell us how to live (and, uh, not live) out cool, casual 20-something lives in New York. Where do we even start?

Erin Whitney: I think the only place to start is on the train (but is it the back or the front?). Every New Yorker, unless they're incredibly lucky, has had that scarring moment where the elation over an empty train car quickly turns into the worst decision of your life. Thanks, human excrement! And that heat! Good god, watching this in January almost made me want to switch places (but like, minus the swamp ass).

Goodman: Bingo. Not to get all "OMG New York is another character in this show!" but New York is definitely another character in this show. Critics talked about that a lot in reviews of the first season, and I'm glad to see it holds over. Like, Abbi getting her air conditioner stolen right outside Bed, Bath and Beyond on Sixth Ave? Classic. That friend with AC suddenly becomes the most popular person you know between May and September.

What did you think about Seth Rogen's cameo as Male Stacy?

Whitney: Love Male Stacy. Seth Rogen is kind of the perfect casting for the gross, weirdo, charming type that plays off of Abbi's awkward humor. And he can also totally own up to a sweat-smiley tee. But we know Abbi can do better, although hopefully she avoids the the sex offender club from now on. What'd you think of Rogen?

Also, we have to talk about stoned Phil of the Future.

Goodman: Phil of the Future! That's who that was. I was trying to place him for a solid minute. Back to Seth. It's so interesting seeing him in this role, and for some reason I saw him as the best guy Abbi's been with (aside from hot neighbor Jeremy, but more on that never). I just kept viewing him as "Seth Rogen, a great 'Broad City' guest star" instead of Male Stacy. He made her fajitas! He was just as sweaty as she was! She wasn't the butt of the joke! Until ...

We should probably get to the idea that Abbi "raped" him, though. Male Stacey passes out from heat exhaustion -- don't blame him -- and when Abbi tells Ilana what happened, this is their conversation:

Ilana: So to clarify, you raped him.
Abbi: No, he passed out from the heat he seriously wanted it.
Ilana: That is literally what "they" say.
Abbi: Yeah but I really mean it.
Ilana: So do they. Dude, did you finish?
Abbi: OMG dude, I raped him. I raped Male Stacy. I'm a monster. I need an air conditioner immediately.

What do we make of this? It's the second mention of rape culture -- Ilana brings it up at Lincoln's birthday dinner -- and here, I'm in that camp of "Is it okay to laugh?" It's a nuanced portrayal of an extremely confusing sexual encounter.

Whitney: And also, Ilana saying with a laugh near the end, "You're a sex offender, at worst. Welcome to the club. It's not that hard to get into." The fun they're poking at rape culture is light and jokey, but it's hard to ignore the relevance of Hannibal Buress' cameo in the dinner scene. Although, this was likely unplanned, since the episode was probably written and shot before Buress' Bill Cosby rape stand-up bit went viral last November.

Of course, if you're attuned to the humor of "Broad City," it's hard not to laugh (whether you think it's okay or not). But it isn't just a quick joke; it continues at least four separate times throughout the episode and with such goofy insouciance. I can't help but think of the "Louie" rape episode from last year with Abbi and Ilana's conversation. Taking this serious and always relevant topic to hash out not only the blurred lines of who's at fault, but what defines rape ("Did you finish?"), gender roles and maybe even mocking the extent we as critics and viewers dissect these storylines. Louis C.K. played with this as well with his episode, stirring a reaction and then flipping it on us in a later episode. But then again, I'm going into crazy analytical mode and we're talking about "Broad City." Where's your head at with this, Jess?

Goodman: Oh, yeah, these jokes were clearly there to make a point about Cosby and rape culture, but I don't think we need to make light of analyzing a show like "Broad City" so closely. It's exciting that a show can be so smart and dumb at the same time, touch all my funny bones and comment profoundly on what it's like to be a young woman.

Getting back to some of the other parts of the episode: We're starting to see more of Ilana and Lincoln's relationship, which has always been such a high (literally) point for me. The Al Dente Dentist! Brilliant! She knows nothing about him! They met in a Foot Locker! It's all so sweet and stupid, just like a real New York relationship. I'm shipping hard for these two.

Whitney: Totally agree. I love Lincoln and Ilana and how completely chill they're relationship is. It does sort of suck that Abbi only gets guys like Male Stacy, but then again I can totally empathize with her intimate love for Bed, Bath and Beyond. Aimlessly home shopping pretty much fills the relationship void, right?

Also, the fact that Abbi not only has a giant Oprah poster over her bed (looking down on her like a deity) but also an Oprah tattoo is maybe the greatest thing ever. I imagine she has a What Would Oprah Do? bracelet too. And another highlight for me: Kumail Nanjani's cameo and the "Your dad should've pulled out" line. Amazing. Can we get that on a T-shirt, please?

Goodman: I'd buy that shirt. Let's wrap this bad boy up: Bravo to the Season 2 premiere, which ended by having Stacy and Abbi yell at and shame a kitten. Only on "Broad City."

Let's Talk About The Return Of 'Broad City'
Broad City 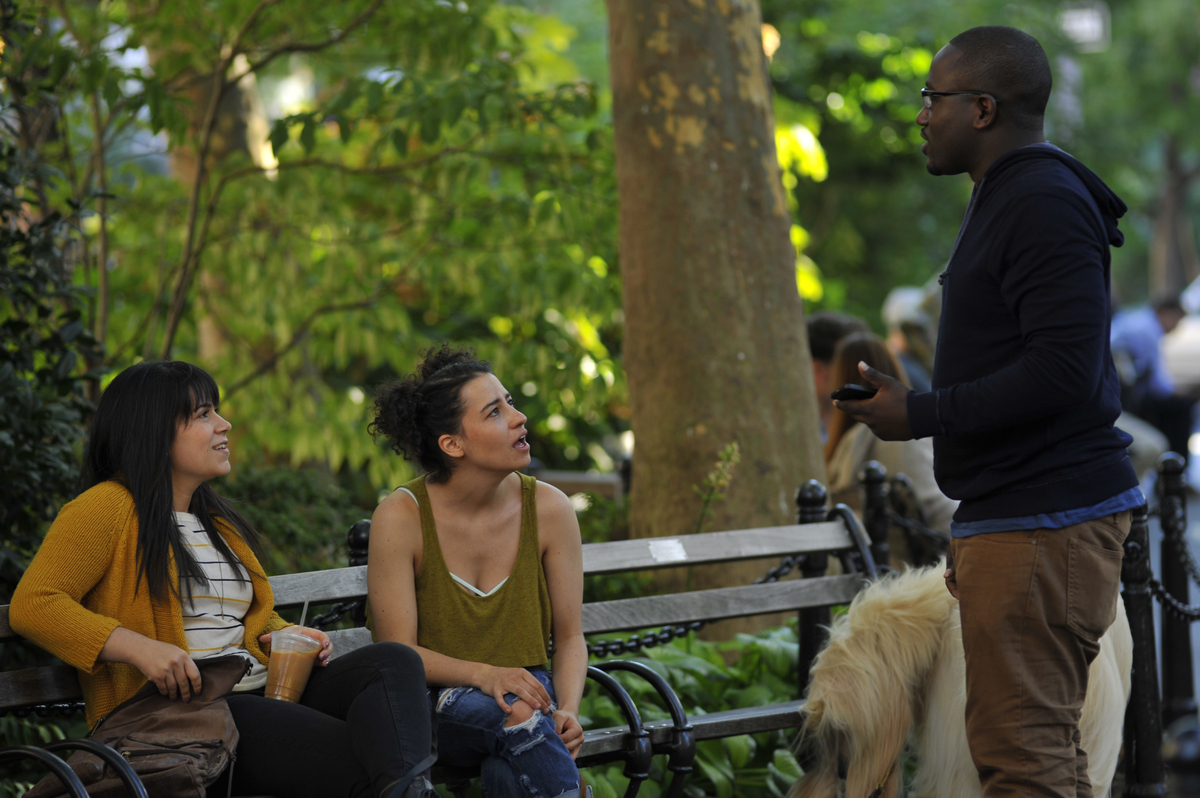