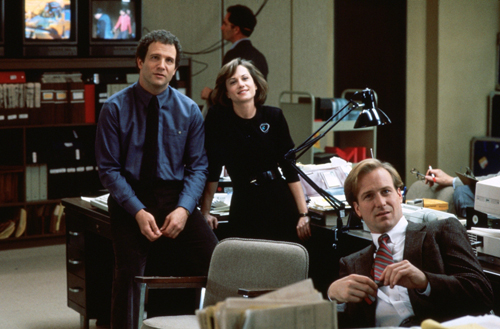 Broadcast News, the 1987 film that captured the battle over the soul of news and the women and men who delivered it, enters the Criterion Collection as the massive shift to news consumption via personality and the internet is causing hand-wringing in the no-longer-hallowed halls of journalism.

There was a pre-internet time when the women and men of broadcast news were the gatekeepers and what they decided to show us was more or less what we knew of the world.

Producer Jane Craig (Holly Hunter), reporter Aaron Altman (Albert Brooks) and anchor-in-waiting Tom Grunick (William Hurt) were navigating the networks of the eighties when women were still rarities in the executive suites and news was beginning its slide from something special meted out by elites to something, well, entertaining. That word for years caused chills in the news divisions but it's hardly an issue anymore as the almost complete absorption of news by entertainment -- whether in fact or in perception -- is no longer news. 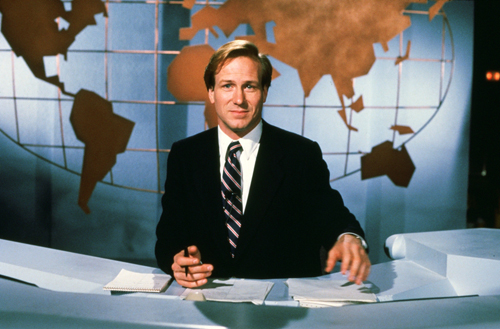 Brooks wisely says in his commentary on the new Criterion disk (in blu-ray with lots of extragoodies):

"I don't think you can watch Dateline [now] without being in tears at the end...The value system that she [Jane Craig, the rising producer] had, you can't mourn it anymore".

But getting network news right, in the end, is not really what Broadcast News did best although it did it very well. What Brooks served up was the perfect love triangle which pivoted on the girl-as-muse, one who was too smart for her own good, who couldn't figure out if you should fall in love with your best friend or the more exotic, slippery-slope suitor. Yet Jane, who routinely picks up three papers on her am power walk and then has a cleansing cry, is like lots of smart women I know: she falls for the wrong -- admittedly studly -- guy.

Brooks says he often writes warm ups for the characters that help him understand who they were, for example, as children. In Broadcast News because they turned out to be so spot-on, he left these scenes in. We see the handsome young Tom confessing his concern about his good looks and bad grades to his father in his delivery truck, Aaron giving the valedictory speech at his high school and then getting beat up in the schoolyard, and Jane taking issue with her father's characterization of her as "obsessive" as she stays up late typing one night. The thumbnails are deliciously predictive.

"It must be nice to always think you're the smartest person in the room," Jane's executive producer says to her in the midst of the newsroom layoffs which decimate the bureau and effect Jane and Tom's promotions and Aaron's departure.

It's very rare that characters who embody competing ideologies are also warm and engaging: Brooks managed the hat trick of having actors who did both (He's had less success with his recent crop of on-the-nose romantic comedies). Brooks showed us that working long hours under pressure can leave you vulnerable to romance. Jane's decision merges the choice about love with the choice about media morality e.g: Is it ok to cheat? Broadcast News also portrayed one of the first great sexual role reversals, the tough (female) boss lending a sympathetic ear to the concerns of the pretty (male) underling ("I'm no good at what I'm being a success at," complains Tom), giving career advice when she really just wants him in her bed. Jane's male reporters rely on her; she literally whispers in Tom's earpiece to feed him lines when producing an important breaking news special ("What an amazing feeling you inside my head, it's like great sex," gushes Tom), and also constantly performs emotional CPR by phone call or house-call with Aaron; he's smart, an excellent veteran reporter but he needs her support and ministrations as much as Tom ("I would give anything if you were two people so I could call up the one who's my friend and tell her about the other one that I like so much," Aaron says in frustration). 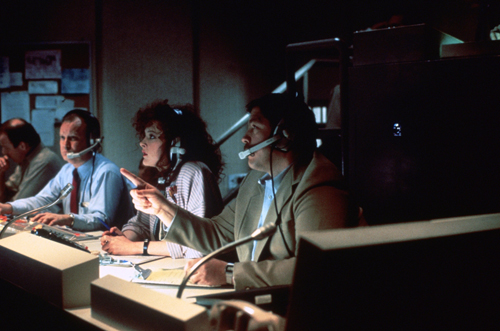 On camera reporters and anchors are chosen partially for their beauty, their charm, their ability not to be flustered by last-minute but they are also smart, capable multi-taskers. Who can blame the current heads of CBS and Disney and a famous director for marrying them?

Jim Brooks -- who began his career with the Mary Tyler Moore show set in a newsroom -- continues to harbor a fascination for the news business and counts many journalists among his friends. Other filmmakers are also engaged by the dramatic pushes and pulls on journalists (I worked on one project with Costa Gavras inspired by the Janet Malcolm essays about journalists as ambitious, double-crossers only out for a scoop.) Films such as Network and its many television clones have delved into this competitive world where you're only as good as your last lede, or as it would be in this day and age, as good as your last post getting thousands of clicks and going viral.

Some things of course have inevitably dated: the way Jane's hair flips back or the way her midi skirts graze her ankles -- lucky for Tom and Aaron, they look completely contemporary the way only suits can.

But the moral conundrum on which the film turns -- should Tom have done a second take for a reaction shot during an interview on date-rape when he summons up tears -- is merely a previous iteration of today's John Bohner kerfuffle. "Start selling a little," Tom counsels Aaron as he preps him for his big chance anchoring the weekend news but the perfect hunch of Brooks's shoulder shows us just how miserable he feels about that. " He personifies everything you've been fighting against," Aaron pleads with Jane, trying, in vain, to outmaneuver her crush. On the eve of her departure with Tom to the Caribbean, Aaron can't help but fling one last righteous salvo into the war over Jane's soul (Aaron even calls him "the Devil") when he points out Tom's fraudulent cutaway to tears.

Jane goes to the airport to confront Tom and tell him she's not coming.

"You just totally crossed the line!," she yells."They keep moving the little sucker don't they!," he retorts.

But Brooks takes issue with the whiners longing for the good old days of broadcast news, "[It was] A movie of its time done at the right time... Quit bemoaning it."

Though news today often has a female face -- Katie Couric, Diane Sawyer, Barbara Walters and Christiane Amanpour (who all have male producers btw); Oprah has her own network and at least two major websites (including this one) are headed by women, the world is not any crazier since 1987 even if it sometimes seems there are even more youthful mass murderers, corrupt leaders, brutal civil wars, unyielding diseases, worldwide famines, impossible budget deficits, intractable politicians and wayward celebrities. The pressures of the 24-hour news cycle and the need for each branch (papers, TV, cable, blogs) to outdo each other, has most recently been blamed for the way the Tucson shooting coverage went wrong.

There will always be news and the question of how it is served up and by whom, whether they have blonde streaks or Louboutin red-heeled shoes or are now almost faceless bloggers is truly beside the point.

It's not sexual politics or entertainment that's recasting the television news business now -- it's opinion. More people who watch TV get their news from a specific host they already agree with: Beck, Maddow, Stewart. Matt Bai recently reminded us:

"There is very little shared experience in the nation now; there are only competing versions of the experience, consumed in such a way as to confirm whatever preconceptions you already have rather than to make you reflect on them." 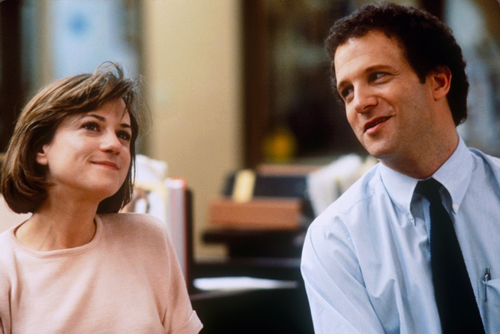 Would Jane Craig today be an anachronism, an over-achieving control freak whose rigid moral scruples served to marginalize her long ago?

Just for fun, I searched Susan Zirinsky -- Brook's female journalist role model for Jane -- on the internet: the last credit I can find for her is for spearheading coverage of Fashion's Night Out.

All images of Jane Craig (Holly Hunter), Tom Grunick (William Hurt) and Aaron Altman (Albert Brooks) and others in Broadcast News courtesy of the Criterion Collection.