Christine Pedi earned her nickname, "The Lady of 1,000 Voices," from her ability to mimic celebrities -- in speech and song -- as shown in her current role in "NEWSical the Musical" and in her long run in the off-Broadway parody revue "Forbidden Broadway." She made her Broadway debut in "Little Me" with Martin Short and Faith Prince and her other credits include "Chicago," Eric Bogosian's "Talk Radio" and many more. She has performed her cabaret show "Great Dames" in theaters around the world. She hosts Sirius XM Radio's daily "On Broadway" channel and co-hosts "Dueling Divas" with Seth Rudetsky on Saturdays. Learn more here.

An agent? Actually I got to Broadway three times without an agent, so that's probably not the answer. I was always approached by casting directors, so in my case it was a casting director who did his homework and didn't just look at the lists of actors they had on sheets of paper submitted by agents. They thought about who would be right for a part and they gave me a call, or someone suggested me.

When I got the role in "Little Me," someone I'd worked with on "Forbidden Broadway" was involved in the show. So this person said to the director, how about Christine Pedi? With "Talk Radio" they needed someone who did funny voices and they thought of me because of all the voices I'd done in "Forbidden Broadway." 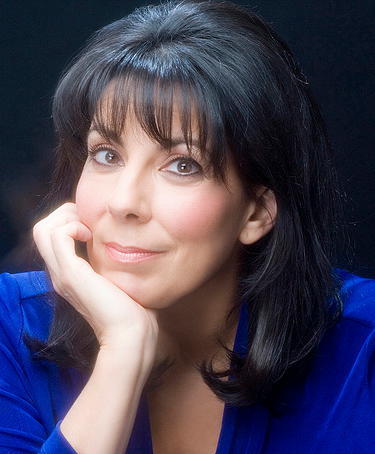 Was "Forbidden Broadway" your break?

Yes. It was a long-running show and I stayed with it forever. It had been running for 10 years when I joined the cast. I did it all over the country. I did its national tour.

Moving from city to city is a very vagabond existence. Did you enjoy it?

My tour was on a bus. There's something called a "Bus and Truck Tour," which means the bus takes the actors; the truck takes the sets. Ours was a "Truck in Bus Tour" because we could fit the set in the back of the bus and the actors in front.

We went to 67 cities in 103 days. Forty-seven states. It was out of control. In those 103 days we only had only five full days where we didn't have to travel or perform. That's a non-union production for you.

It's difficult. I didn't move out of my parents' house until I was in my 30s because I was home for a month and then leaving for two or three months; constantly going out and coming home like a gypsy.

Were you a performer as a child?

No, except at the dinner table. I never sang a note until high school. For some reason I auditioned for the high school play, "Godspell."

Did you get the acting bug immediately?

A little bit. I liked it and among extracurricular activities, that was going to win. I hate sports; I'm bad at sports. Drama was fun. I went to an all-girl school. The boys' school had the big, fancy musicals. I auditioned for those, too.

Did directors encourage you?

When I did "Godspell" the director suggested to my mother that I take singing lessons because she thought I had a good voice. I thought she was crazy. Me? We had one cast-recording record at home: "The Most Happy Fella." I loved it but I never dreamed I could sing like that. I'd run around the house singing it and it didn't sound like what I heard on the record.

My mother took the suggestion seriously and I went to a local lady and we paid her $7 a session. I went after Sunday school. She was the second [woman to play] Laurey in "Oklahoma" on Broadway. She had a high, sweet soprano voice. When she spoke, it sounded like she was singing. It was a lovely, sing-songy voice.

She played piano and gave me very serious soprano things to sing: "My Lord and Master" from "The King and I" and "Baubles, Bangles and Beads" from "Kismet" and a lot of depressing Italian songs. Finally, I asked why, She said, "I thought you were Italian and that you'd like to sing in Italian." Well, we spoke English at home.

When did you really get hooked?

College. Fordham University had a radio station that was completely student run. There was a program on the station that featured the music of Broadway and I ended up hosting it. And I became the Arts Editor, which meant I could get free tickets to Broadway shows. I was stunned.

I spent two or three nights a week at Broadway shows. I would take the Fordham van to its Lincoln Center campus and I'd walk to the theater. That's when I became completely bitten and when I felt theater was something I might want to do.

When you applied to Fordham had you been thinking of a different career?

I majored in communication. I wanted to be an art therapist and teach children through art. I couldn't afford to go away to college; I had to commute. Fordham was one of the options in the area and when I took the tour of the school they happened to show me the radio station.

I said, "What is this?" "It's the college radio station." "I could work here?" I asked. That was it. It was all student run, but run like a professional station. It was like going from 0 to 60 from the first day. I was at the station every day for four years. That was my clubhouse. That's where I made my friends.

I got my job with Sirius XM radio because I met Paul Cavalconte, who has been a D.J. on the air in New York City since we graduated. He was working for Sirius when it was still in test markets and they needed someone to host the Broadway channel. He suggested me.

When did you go from watching theater to performing?

When I started going to the theater all the time. That started to make me long to perform, even though all I had done, really, was a couple of high school plays. In college, a friend put together a production of "Side by Side by Sondheim." He asked if I wanted to do it and I said, "Sure." That was the first time I belted a note in public. I didn't realize I could really belt it out, but I could.

I started doing community theater around New York. I got the best roles and they had big budgets and great orchestras and Equity actors often were part of it. I played Eva Peron and Fanny Brice and Eliza Doolittle. Fabulous roles. And that's when I started to learn the craft.

After two years, I quit my day job with a telethon and decided to pursue theater full time. I didn't know anyone in the business. I didn't have a single working actor friend. I didn't know how I would do it other than by buying Backstage and circling the auditions that looked like I'd be right for it.

I didn't have agent. I went to cattle-call auditions for years.

Did you have to learn how to handle being turned down for a part?

I suppose so. I guess I felt I had time and needed to keep trying. The hardest part was not being turned down for a part, it was not getting a part after I'd waited around for a full day. You wait and wait and wait for your audition. Running out to feed the parking meter, or finding a cheap way to get into the city when I had no money: that was tough. I would drive from the suburbs to the Bronx and park and then take the subway.

I could only temp because I had to be able to go for auditions. The process was exhausting and dehumanizing, but I guess I got enough positive feedback that I thought something would click eventually.

Finally I said I'm done, no more humiliating cattle calls. I'm not auditioning again until I get an agent. I had absolutely no idea how that was going to happen because no agent wants you when you have no credits except community theater.

And truly the next day I opened Backstage and there was an ad for "Forbidden Broadway." I'd known about the show since I was in college. I never was one for impressions but I knew I had a gift for mimicry and accents. I thought I could fake it.

When I saw that ad, I looked up to God and said, "OK. But this is the last time." I went, and they auditioned hundreds of girls. They told me I was the absolute first choice among them all. I found out later that Gerard Alessandrini, who has been writing "Forbidden Broadway" since 1982, wanted to put me directly into the New York show but they needed me for the touring company. The tour producer said, "No. We've got to have her."

The great things were that the show kept changing and I got to travel, which I'd never been able to do. Everyone should do that and see this country side to side. You really understand it better. You get a sense of the energy in different parts of the country.

The coldest day of my life was in Thunder Bay, Canada. My eyes froze. And then I sat down in Detroit with the show for a year. I'd read horrible things about Detroit but it was the happiest year of my life. People treated us wonderfully. I investigated every corner. After the show every Sunday, I would go to the Detroit Institute of Art and see an independent film or a foreign film. I did that every Sunday night for a year.

If you could do just one thing for the next two years, what would it be?

I would like it to be something that changes. I think it would be great to be in a truly funny television show. Really, truly funny. And important. There's nothing greater than making you laugh and making you think. And I would love to be in a new musical that has a score that delights me to sing. I would love to create a memorable character who I would get to share with an audience.

But if I had to do one thing for the rest of my life, it would be a cabaret show. There's no end to the stories you can tell and the songs you can sing, the evenings you can construct and the journeys you can take people on. I have lists of ideas for cabaret shows. Lists.

That's New York, and that's you.

Yep. That's New York and that's me. I tell you, when you pay the rents we do, there's nothing more satisfying than knowing you've accomplished a lot. You unlock the front door and close it behind you and the rent notice is there. You want to spit nails. And then you realize, where else can you accomplish this much?