An Ohio college student, who vanished after leaving his apartment, has been found dead in a vacant building, authorities said.

According to Cincinnati Police Chief Jeffrey Blackwell, the landlord of a Cincinnati building that is undergoing renovations contacted police late Monday to report a possible breaking-and-entering. Upon arrival at the scene, officers discovered the body of sophomore Brogan Dulle in the basement of the building.

"It appears right now to be self-inflicted," the police chief said, without elaborating.

Dulle, a 21-year-old student at the University of Cincinnati, left his McMillan Street apartment around 2 a.m., on May 18. Dulle's roommate reportedly told police Dulle left to retrieve a cell phone he lost earlier that evening while visiting either The St. Clair, a nearby bar, or Mac's Pizza near UC's campus.

Dulle never returned to his apartment and was reported missing on May 19, after he failed to show up for his job as a swim coach at Mercy HealthPlex.

Despite multiple searches of the area, authorities and community volunteers were unable to locate the missing college student. According to local media outlets, the location where police recovered Dulle's body Monday night is next door to his apartment.

The Hamilton County Coroner's Office has not officially ruled on a manner of death.

A message posted to the "Help Find Brogan Dulle" Facebook page Tuesday reads: "The Dulle family has been informed that Brogan has been found deceased. Brogan’s family is heartbroken by the loss of their beloved son and brother. The family is overwhelmingly grateful for the love, prayers, support [and] time given by the Cincinnati community. I ask for us all to respect the need for the family to grieve and support one another in privacy at this time."

"Brogan was part of our university family, and our hearts are heavy with the news of this devastating loss," Ono said. "On behalf of the University of Cincinnati, I want to express our deepest condolences to his parents, siblings, family and friends." 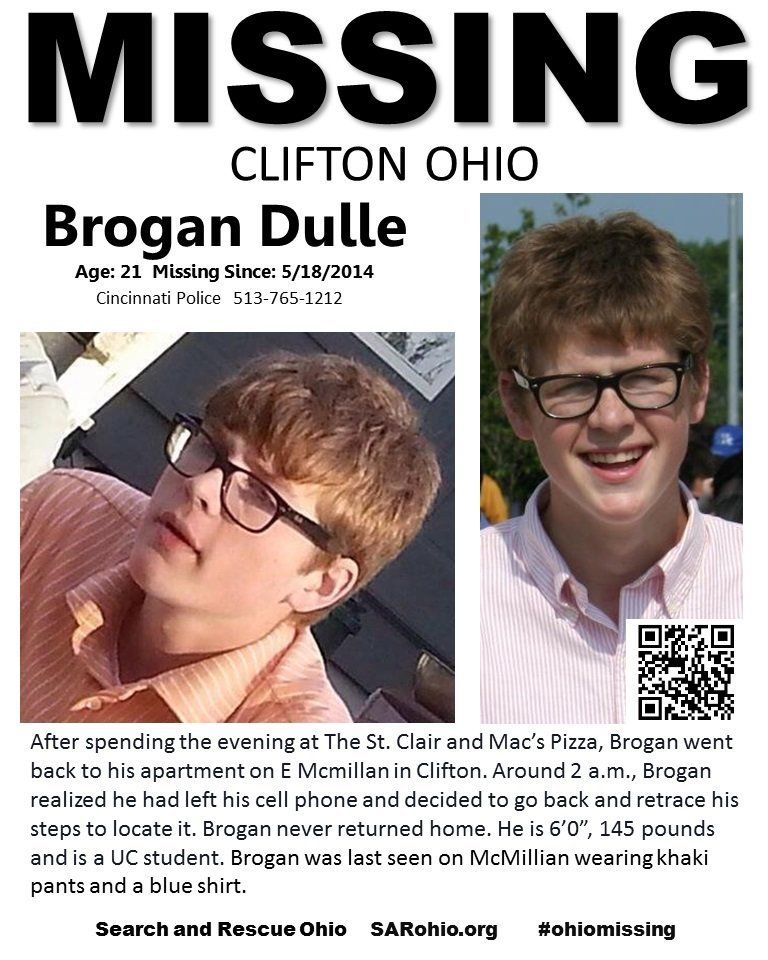 1 / 6
Brogan Dulle
Police say 21-year-old Brogan Dulle, a student at the University of Cincinnati, was last seen leaving his McMillan Street apartment around 2 a.m. on May 18, 2014.
Facebook