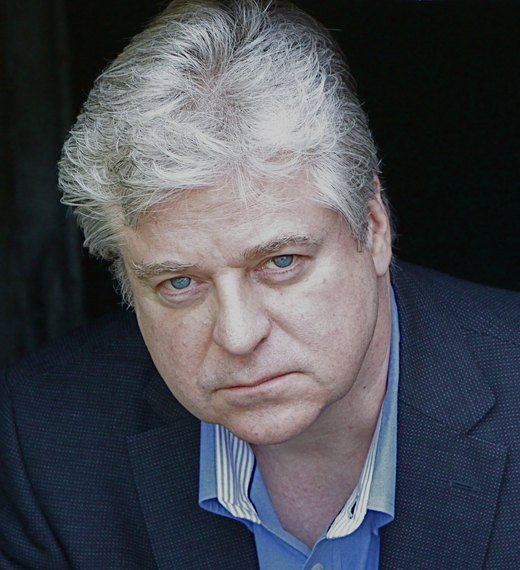 Linwood Barclay's thrillers have been international bestsellers. Trust Your Eyes, an intriguing novel with a unique premise, has been optioned for film. The Associated Press said, "Linwood Barclay has established himself alongside the masters of suburban fiction."

In just-released Broken Promise, unemployed journalist David Harwood, grieving his wife's untimely death, moves with his young son back to his parents' home in Promise Falls, New York. One morning, David visits his cousin Marla, who has been acting strangely since having lost her baby during childbirth a year ago. Shockingly, David discovers Marla holding a 10 month-old baby boy who Marla says is her son. David begins investigating the child's true identity; nothing is really as it seems, and Marla's mysterious child is merely the tip of the iceberg.

Quoting from the opening lines of Broken Promise: "A couple of hours before all hell broke loose, I was in bed, awake since five, pondering the circumstances that had returned me, at the age of forty-one, to my childhood home." You once talked about the importance of a "hook" in a thriller. Tell us about that.
The last thing I'll ever do is write a novel that opens with a long-winded description of scenery. I want to get the reader interested, right away. In this day and age, with people's limited attention spans and distractibility, you have less time than ever to grab someone's attention. You need to get people hooked. You can do it with an opening line or the situation in the book--the 'What if' element that will make someone read on.

Broken Promise has intriguing twists, as do all your novels. Talk about the role of twists in thrillers.
I love to constantly pull the rug out from under the reader, and also, from under the book's characters. I'll often get to the end of a chapter and ask myself what the most logical thing to happen next would be. And that's what I won't do. I'll do something different, even if it's not a huge twist, just a small surprise here and there throughout the book. I think it's a way to maintain interest--by throwing the reader off balance. One of the appealing aspects of reading crime fiction and thrillers is thinking you know what's going to happen next, only to find out you're wrong. It's a more satisfying book if the reader is surprised by the plot twists; and it's a great way for me to have fun with readers in the thriller format.

I understand Broken Promise is the first of a series set in Promise Falls.
It's the first of three books. There are some unresolved issues in Broken Promise. They're not completely sorted out by the end. There are two more novels coming. The backstory will play out in book two and explode in book three. The other two books are already written. When I had the idea of writing this trilogy, I worried that when I got to book three, I might have a really great idea that I'd missed in book one, which would already be in the stores. So, I wrote them back-to-back in fifteen months to maintain the linear flow of the trilogy.

Many writers find themselves dealing with the tendency to procrastinate. That doesn't seem to be a problem for you.
I'm virtually the opposite. I've never been a procrastinator. Once I'm working on a project, I just want to get it finished. I find if I take too long writing a novel, I lose my sense of continuity and the flow suffers. I prefer to get immersed in it and keep going until it's done. If I write continuously, with no significant breaks, it becomes almost a seamless story. Here, I did it with three books, which I wrote in a relatively short period of time.

From 1981 to 2008 you were a journalist with the Toronto Star. How did this impact your writing life?
I started in journalism in 1977 and got to the Star in 1981. I was an editor and columnist. Newspapers have shaped how I write in ways that tie into your previous question. I have a huge appreciation for deadlines and getting work done. For me, writing is not a romantic thing; you know, some people wait for the 'muse' to strike. To me it's a job, one I want to do because I love it. But, it's still a job. When I sit down in the morning, I plan to get two-thousand words written that day. That's the plan. With newspaper work, there was never the luxury of calling the editor and saying, 'I'm just not feeling it today. The muse hasn't struck.' (Laughter). I think newspaper work trained me to get the work accomplished. Also, it impacted how I write. I'm not a flowery, descriptive writer. I don't try to impress people. I want to tell them the story.

What has surprised you about the writing life?
The biggest surprise I think is that becoming an author has afforded me the opportunity to experience humiliation in ways I did not know existed. (Laughter).

Care to elaborate?
Sure. You think, 'Wow. I'm a published author, now.' Then you go to a bookstore event, and absolutely nobody comes. The only thing worse than nobody coming to an event, is if only one person shows up. If nobody comes, you just go to the nearest bar. But if one person is there, you have to talk, and maybe even sign a book, if one manages to get sold.

When I first started writing, I went to a chain bookstore. My book was on the shelf with a card sticking out, saying it was recommended by Jay, a store employee. So, I go to the counter and see a guy wearing the nametag, "Jay."

I said, 'Thanks so much for having read my book and recommending it. Would you like me to sign a copy?' He looks a little baffled, but says, 'Sure.' So we walk over to the shelf where I point to my book with the card sticking out beneath it. He says, 'Oh, somebody moved it.' And he slides the card over beneath the book next to mine: it was Dave Barry in Cyberspace. This was my welcome to the 'glamorous' world of being an author.

Another time, I went to a huge bookstore in Toronto for a book-signing. The manager said, 'Have a cup of coffee on us,' and signaled the barista at the in-house Starbucks. At the counter, I ordered a coffee, and decided to have a cookie. The barista looked at me and said, 'I know I can give you a coffee, but I don't know if the cookie's free." I laughed and said I'd pay for it.

The other big surprise is that I'm doing okay at this. I never dreamed I'd be doing as well as I am.

What's the most important lesson you've learned about writing?
The biggest lesson is that I still have things to learn. I think I make some kind of mistake in every book I write, whether it's a problem with structure, point of view, or whatever. I think to myself, 'I won't do that again.' I learn from that mistake and write the next book, and don't make that mistake, but I make a different one. I find no matter how many books I write, it's always a learning experience.

What advice would you give to beginning writers?
It echoes the advice Stephen King gives: you must keep reading-- a lot. The second one is, if you're a writer, you're doing it because you don't know how not to do it. You can't stop. The third piece of advice is you just have to keep at it. I wrote three novels in my late teens and early twenties; thank God they weren't published, but I was trying. I wrote novels until I was about twenty-seven, and then got so busy at the Star, I gave it up, but eventually came back to it. The real takeaway is: read a lot, write and write even more, and just keep at it.

You're hosting a dinner party and can invite any five people, living or dead, from any walk of life. Who are they?
The first one would be my dad, who died when I was sixteen. I would also invite my wife and two kids so they could meet my father. I would be the caterer.

Congratulations on writing Broken Promise, another novel destined to fit Lisa Gardner's description as "One of the best thrillers of the year--where nothing and no one is all that they seem."