Around here, most of us are not really vodka drinkers. We like to really be able to taste and smell the spirits we're drinking, which is an experience vodka doesn't really afford. When we caught wind of a vodka being made from whey, however, our ears perked up. Vodka is generally distilled from grains, potatoes or grapes. Broken Shed Vodka out of New Zealand is being distilled from whey -- yes, as in, the milky, glorious by-product of cheese-making.

The creamy origin of this vodka makes it sugar free, gluten free, gently viscous and highly palatable, even to a couple of non-vodka drinkers. As one of our Editors eloquently put it, "It's vodka for the vodka haters." The usual burny, ethanol hit of traditionally-made vodkas is completely lacking. Instead, Broken Shed enables you to taste an almost floral note in the vodka. At Broken Shed's $30-35 price point, we can see it giving higher-end, premium vodkas a real run for their money. 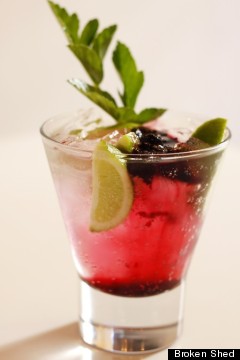 Broken Shed knows that their vodka is simple and elegant, so when suggesting cocktail recipes, they really don't muck about with things too much. Check out their slightly elevated vodka and soda cocktail.