I might not be the "right" person to write this blog post. I am white. I grew up in a town that is nearly 100-percent white. I can honestly say I have never spent any time worried that my husband, brothers, or nephews would be treated unfairly by the American justice or education systems.

I know now that if I were not white, this would be unlikely to be true. 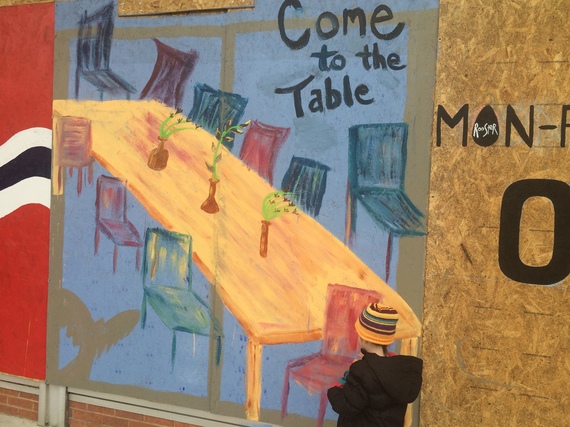 My daughter, Sophia, looking at a boarded-up window along South Grand Ave. in Saint Louis, where windows were broken following the announcement that Ferguson Police Officer Darren Wilson would not be indicted in the killing of 18-year-old Michael Brown.

It was not until 2005, when I started teaching in St. Louis public schools, that I even began to understand the privileges that the way I look has conferred on me. In the wake of the shooting death of 18-year-old Michael Brown by Ferguson Police Officer Darren Wilson, one instance in particular sticks out now. It was a day about halfway through my first year teaching when a parent asked me if I would help her plan how to introduce her 10-year-old son to the police in the wealthy suburban town where he was going to be attending school after he left my classroom. The mother knew her son would be staying at his new school late to visit friends, play sports, etc., and did not want him to draw unnecessary police attention simply because he was black. As I listened to her talk through the benefits and downsides of taking him to the police station to introduce him versus giving the police station a picture of him, I felt the weight of my white privilege.

In the wake of events in Ferguson, much of the conversation around privilege and the policing of African-American communities has been about the psychological "weight" this adds to African-American lives. What that conversation in my classroom nine years ago taught me was that I should be feeling a "weight" too: the weight of my privilege. I see the inherent unfairness of privilege as a weight that can only be lifted when I work to be better, to do better, to be an ally, to call out privilege, to change systems.

It is with that in mind that I ask this question: How do we fulfill our responsibility to this generation of children so that they can realize sooner than I did that our systems are broken and that it is everyone's responsibility to fix them?

The surest way I know how is by doing the following:

One of the criticisms that the Ferguson Police Department has received over the last three months is that there are only three African-American officers on its police force. If anyone in the St. Louis region was surprised by this, he or she must not have been paying attention. Forcing African Americans to attend failed schools has kept jobs in the region's police departments out of reach for far too many African Americans.

There is no single solution, and school choice is never going to solve all our nation's equity problems; I know that. But imagine if, for the last 30 years, children in Normandy, where Michael Brown was a student, or in other North St. Louis County schools, had been able to choose where they went to school. Imagine if they had had access to the same high-quality schools that their more privileged peers had. Imagine if they had not been banished to schools where their chances of dropping out were higher than their chances of learning to read. If this had been the case, perhaps the Ferguson Police Department would look a lot different than it does.

2. Make civics, history and government a priority, and hold schools accountable for teaching those subjects.

Much like school choice, better-informed and engaged citizens will not solve all our nation's equity problems. But it sure can go a long way toward creating citizens who can. I, for one, grew tired of hearing about how voting was going to change the future of citizens in North St. Louis County. So I do not mean simply educate students about the importance of voting.

What I do mean is that we need to create a system that teaches students that the government is theirs to hold accountable and follow that up with teaching how to be an advocate for yourself and others. I do mean make sure all students know that they are equal under the law. I do mean make sure all our students understand that the saying "If you want peace, work for justice" is not just a bumper sticker but is what makes a democracy work. This will not just show our children of color that their lives matter but will guarantee that all our students know the importance of valuing all our differences and valuing all lives. This is essential for creating a system where none of our students grows up to be a governor who is afraid to talk about race or who puts his own political future above the needs of a grieving community. It will help prevent our students from growing up to be the police officer who pulls the trigger when a conversation would have sufficed. It will ensure these things because teaching our students about their civic responsibility and the history of our democracy -- the real history, not a whitewashed one -- will demonstrate what St. Louis Pastor Traci Blackmon said is true: "Your liberty is connected to mine."

Our country has a long way to go. We have a lot of wounds to heal and a lot of work to do. No one person holds the key to healing the wounds, fixing the system, and fulfilling the dream. But it is time we all accept the responsibility to listen and act as a nation when even one person says, "I can't breathe."