This morning, I woke up and did exactly what I do almost every morning:

Once that was done, it was work time. Some days there's little to do, and I can lounge though the morning (not often). Other days there's far too much to do (more often). No matter which kind of day it is, though, what happens in the morning basically stays the same.

That might seem like a way to distract myself when there are far more life-altering things to get done, but I've learned it's the best way to keep myself calm and productive no matter how busy I get. These are the fundamental things that keep my life running smoothly so the bigger, legacy type of projects can be tackled without added stress. It improves my work and keeps me happy.

When things get out of control, I remember my mother's wisdom to her ornery son: "Big boys make their beds."

If you're the type of person who feels habitually over-worked, stressed out, and overwhelmed (and probably not producing quality work) there's an important lesson here. 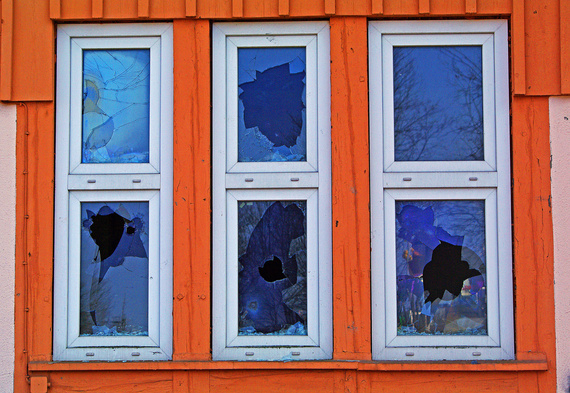 Broken Windows Theory: How Your Day Gets Out Of Control

When something goes wrong in a big way -- a once great sports team loses to a no-name underdog or a successful business goes under -- it's almost always for the same reason. At some point during their rise, everyone quit paying attention to the fundamentals. They advanced so far and started spending so much time trying to perfect the fancy stuff they lost sight of the basics. And when the basics crumble, the fancy stuff doesn't matter any more.

In The Tipping Point, Malcolm Gladwell writes about George L. Kelling and James Q. Wilson--two social scientists who pioneered a new way of policing in major cities across the world. Their work was based around what they called the "Broken Windows Theory." The idea is that if you prevent and quickly remedy small crimes, you'll prevent bigger ones that take more work to fix.

This policing theory is often cited as the top reason for the dramatic drop in crime in New York City in the 90s. Police shifted their focus to dealing with petty crime, and more serious crimes became less and less frequent.

How To Apply "Broken Windows Theory" To Your Life Every Day

The reason life sometimes feels so overwhelming often is not because you take on too many projects or responsibilities (though it's certainly a contributing factor) but because the fundamentals get lost as you start to panic and focus your energy on things that seem more important in the moment.

Righting the ship and getting things back in control require setting some counterintuitive priorities. I imagine it was hard for NYC police officers to focus their attention on having a broken down car towed when there were so many big crimes to solve, but it was that reprioritization that helped fix the problem so there would be fewer big crimes to solve in the first place.

You can follow that lead in your own life. If things get busy and you let your home, relationships, and happiness flounder while you put out fires elsewhere, eventually you find things just get worse and those higher priorities start to matter less.

But if you take time to find those potential broken windows in your life -- the fundamental things you need to focus on to make everything else work--the bigger aspirations start to take care of themselves.

For me, I know that means going for a run even when I don't feel like it so I feel energized. It means making my bed first thing in the morning even when there's too much to do and I'm already behind so the rest of the house doesn't fall out of order. It means making sure the kitchen is clean so my wife doesn't resent me when she comes home ready to make dinner.

These things get done every day, whether I'm busy or I'm not. And the better job I do prioritizing them, the less things seem to get out of control in the first place.