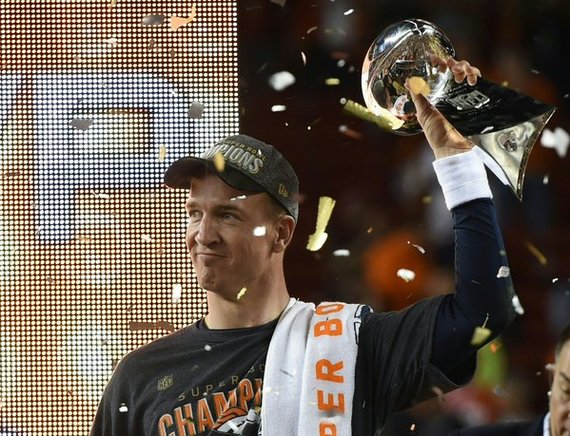 Santa Clara, CA - This night couldn't have been scripted any better. A team that dominated during the regular season comes in with all the buzz and stats to complete their season with a win. But an old timer and explosive defense shattered the dreams of a young team with a phenomenal regular season record.

The Denver Broncos marched into Levi's stadium for Super Bowl fifty and defeated the Carolina Panthers 24-10. The fourth quarter belonged to Peyton Manning and his team. They scored their final touchdown late in the quarter while securing their win with a two-point conversion.

"This game was like this season has been. It tested our toughness, our resilience and our unselfishness," said Manning. "It's only fitting it turned out that way. A great bunch of teammates, a great bunch of guys to play with. I feel very, very grateful."

There's been talk all season that Manning may retire after this season especially after the amount of injuries he endured throughout the season. Broncos management, his teammates and fans all except the two-time Super Bowl champ to retire and have already begun thanking him for what he's done for the organization and the team this season.

"Peyton has been tremendous, he came in four years ago and we've won 4 AFC Championships and got us to the Super Bowls," General Manager John Elway said. "What he's meant to us and this league has been tremendous. He's been a role model to so many including this organization, we're going to enjoy this tonight and see what happens later."

Super Bowl Fifty was everything we expected. Intense, exciting and kept us on the edge of our seats. Denver wasted no time moving the ball on opening drive. But the Panthers made stops when they needed forcing the Broncos to strike first with a field goal giving them a 3-0 lead. The problem, Carolina needed to do more.

Cam Newton who is the goat of the team wasn't as perfect as we had hoped for. The MVP had the ball stripped from his hands by Super Bowl MVP Von Miller forcing a fumble, Mailk Jackson recovered the ball for the touchdown extending the Broncos lead to 10-0 in the first quarter.

"They outplayed us," said a somber Newton.

Denver's defense had one goal and that was to smother Newton all day. The Broncos top-rated defense that sent Tom Brady and the New England Patriots fishing after the AFC Championship successfully took Newton out of his game. The league MVP was at a loss of words after the game and replied to most questions with one-word answers. He couldn't end it right after having the best season in franchise history.

Miller stripped Newton twice in the game forcing turnovers, once for a touchdown, the second time setting up a clinching touchdown late in the game. It's not often you see a defensive player being awarded the game MVP but Miller's season was beyond impressive.

"It just shows what type of defense that we've been playing," Miller said. "It's honestly not about me. If I could cut this award, I would give it to DeMarcus [Ware] and [Derek] Wolfe and all the other guys. The MVP is great but, I'll take the ring. I put my neck on the line for those guys."

Carolina rallied back in the second scoring their only touchdown of the game. Newton pushed his offense up the field and a face mask by Aquib Talib put the Panthers on the goal line. Next play Jonathan Stewart dived over the goal line and players for the touchdown making it a 10-7 game. But that was all we saw from the Panthers offense that was so dominant throughout the regular season.

"Denver did a really good job of executing their game," Linebacker Thomas Davis said. "That's really what it boils to. We had opportunities, we had chances and we let them slip away."

The Panthers added a field goal but continued to struggle in the second half. Things got worse when Graham Gano's 44-yard field goal went wide right in the third. But Brandon McManus followed with his third field goal for 30-yards giving Denver a 16-7 lead. Newton then tried to go deep to Ted Ginn Jr. but got picked off by T.J. Ward.

The fourth quarter belonged to the champs when Manning led his team to scoring their final touchdown. Miller stripped Newton for the second time to force a fumble. T.J. Ward recovered at the Carolina 4. That setup C.J. Anderson 2-yard touchdown. The Broncos followed with a 2-point conversion to setup the celebration.

"This game was much like this season has been, testing our toughness, our resiliency, our unselfishness," said Manning. "It's only fitting that it turned out that way."

When asked about retirement, the 39-year old responded calmly by saying, "I don't know the answer to that. It's been an emotional week, emotional night, and the night is just beginning, I look forward to celebrating with my friends and family and I think I'll take some time after that."