Brontosaurus is back, baby!

Generations of schoolchildren have learned that a massive, long-necked dinosaur called Brontosaurus once roamed Earth. But in fact, scientists dropped that name more than a century ago -- referring to it as Apatosaurus instead.

Now, after a thorough analysis of dozens of long-necked specimens, a team of British and Portuguese paleontologists says it's time to revive the old name.

"It's the classic example of how science works," study co-author Dr. Octavio Mateus, a paleontology professor at Universidade Nova de Lisboa in Portugal, said in a written statement. "Especially when hypotheses are based on fragmentary fossils, it is possible for new finds to overthrow years of research." 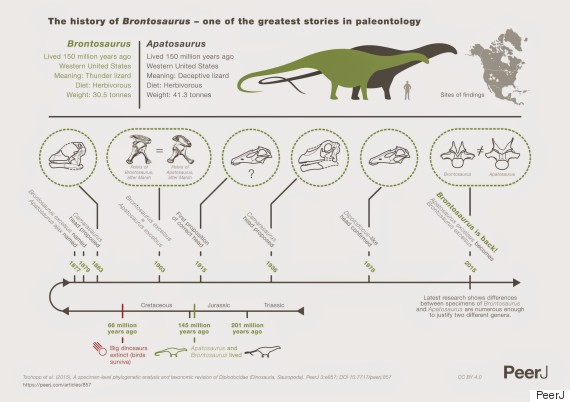 The backstory. Starting in the 1870s, rival paleontologists Othniel C. Marsh and Edward D. Cope were scouring the American West, competing to find new dinosaurs in what became known as the "Bone Wars."

During Marsh's digs, his team found two incomplete skeletons of massive, long-necked sauropods. Based on one of the skeletons, Marsh announced the discovery of a new dinosaur called Apatosaurus ajax, the "deceptive lizard" in 1877. Then, two years later, he described the second skeleton as belonging to another new species called Brontosaurus excelsus, the "noble thunder lizard."

But after paleontologists collected a specimen with features similar to both Brontosaurus and Apatosaurus, they said the two dinosaurs were too similar to belong to separate genera. And so in 1903, Brontosaurus was re-classified as Apatosaurus excelsus.

A second look. For the new analysis, the researchers spent five years examining the scans and fossils of 81 sauropod specimens. Then they conducted statistical analyses to discover how much the dinosaurs differed, based on 477 specific features, Scientific American reported.

"Our research would not have been possible at this level of detail 15 or more years ago," Dr. Emanuel Tschopp, a paleontologist who led the research while completing his PhD at the Universidade Nova de Lisboa, said in the statement. 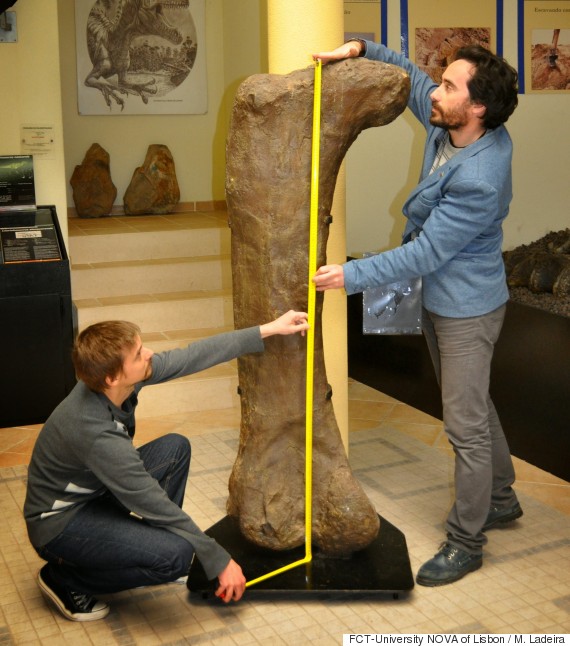 What did they find? Apatosaurus and Brontosaurus were less similar than would be expected from two species belonging to the same genus.

“It was a number of small differences that were important, but probably the most obvious features that would help distinguish the two is that the Apatosaurus has an extremely wide neck, where Brontosaurus' is more high than wide,” study co-author Dr. Roger Benson, a paleobiologist at Oxford University, told Wired.

Brontosaurus as researchers see it today.

Not so fast? Though some experts are excited at the prospect of bringing Brontosaurus back, others say further research should be conducted before the name gets reinstated.

"It’s going to be a long time before we get there, probably, but this paper is a big start in terms of getting the debate going," John Whitlock, an associate professor at Mount Aloysius College who wasn't involved in the research, told the Washington Post. "At the end, though, we’re going to be in a much better place in terms of truly understanding the evolution of the lineages we study, and that’s exciting."

A paper describing the new research was published online on April 7 in the journal PeerJ.

CORRECTION: A previous version of this article misstated the name of the publication.