What happened to the Brontosaurus? The beloved dinosaur has been a part of numerous museum exhibits and a big part of pop culture. But did you know there's no such thing as a Brontosaurus?

I had a chance to sit down with Brian Switek, a dinosaur expert and the author of "My Beloved Brontosaurus," who told me about the legacy of Brontosaurus, the Bone Wars, and interesting cases of other common dinosaur misconceptions.

Watch the video above, or click the link below for a full transcript. And leave your thoughts in the comments section at the bottom of the page. Come on, talk nerdy to me!

CARA SANTA MARIA: Hi everyone. Cara Santa Maria here. I am a huge dinosaur nerd. I love visiting them in museums across the country. But in lots of cases, the portrayal of these giant beasts is almost as antiquated as the bones themselves.

BRIAN SWITEK: Once you put up a dinosaur skeleton it’s very, very difficult to take it back down again. There are actually some very wrong dinosaurs that are still up in a lot of institutions. If you go the American Museum of Natural History in New York City you’ll see dinosaurs that have broken tails and broken backs, they’re still dragging their tails, they’re still looking as they did in the early 20th century just because it’s impossible to remove them from the plaster and the armatures that they were put on.

CSM: That's Brian Switek. He's a dinosaur expert and author of "My Beloved Brontosaurus," the story of a popular culture icon that's warmed the hearts of children for over a century. Unfortunately, Brontosaurus isn't a real dinosaur. And, you ready for this? Scientists began figuring that out over a hundred years ago. When Brian first met the mighty brontosaurus as a young boy, it had been a whopping 80 years since the scientific community stopped calling it that. 80 years! But there it was, in a dusty museum, label and all.

BS: As I was sort of walking by the brontosaurus skeleton, you know myself just sort of knee high to the dinosaur itself at best, I just remember looking up and imagining what it would be like to actually see the animals fleshed out, to hear them breathing, to see it moving. You know, how this animal actually lived. And then when I got home and I started you know looking into all the books that I had and talking to teachers about dinosaurs, you know I wasn’t crushed by it, but I found out that brontosaurus wasn’t a real dinosaur. You know it was this chimera that had come together because of, sort of fossil mistakes, and hypotheses that later turned out to be incorrect.

CSM: It's a classic bone-wars era story. The brontosaurus is, in fact, an Apatosaurus. But it took scientists a while to realize their mistakes, and by then, it had captured the imaginations of millions.

BS: There was a species called apatosaurus ajax, which the Yale paleontologist O.C. Marsh named in 1877. And it was a relatively incomplete specimen, but it was one of these long-necked, heavy-bodied sauropod dinosaurs. In the following year, his field crew working at a place called Como Bluff in Wyoming found another skeleton of a similar dinosaur. Now back then, you know, most dinosaurs that were found were very fragmentary, there might be as little as a piece of a tooth or part of a bone. So if there is any difference whatsoever, paleontologists like Marsh and his rival edward drinker cope based out of Philadelphia, they would name a whole genus or species on the basis of basically the tiniest scrap, if it seemed like something new. So it’s really no surprise that when Marsh got the skeleton out of Wyoming, that he decided to name it brontosaurus, that he gave it a different genus name. So those two names stayed in the literature for a couple of decades. And along comes paleontologist Elmer Riggs in 1903. He’s doing a revision of the sauropod dinosaurs, and he’s doing a look at both of them. He says, ‘you know, really, these are really really similar. They’re different species. There’s apatosaurus ajax and there’s Apatosaurs excelsus, but they’re so closely related that there’s really no reason to split them out and have a different name. So he put that out in the literature in this major monograph in 1903 and nobody cared. Nobody paid attention to it, or if they did, they didn’t show any sign of it. Museums kept, you know, brontosaurus skeletons. They kept naming these dinosaurs. Brontosaurus illustrators kept putting out Brontosaurus illustrations. So this was the dinosaur that the public got introduced to, and because of its size, you’re dealing with an animal that’s, you know, 60-plus feet long in many museum exhibits. It’s absolutely fantastic, it’s not like anything anyone’s ever seen before. So you know, Brontosaurus, this dinosaur that should be dead, becomes the icon of the Jurassic and for many dinosaurs in general. So even though it’s in the literature and paleontologists actually know that the proper name is Apatosaurus, to most everybody it’s still Brontosaurus.

CSM: And it's more than just the Brontosaurus. To this day, we see mistakes in popular culture. T-rex still stands upright when we now know his posture was nearly horizontal. In Jurassic Park, Dilophosaurus had a giant frill and spit poison when there's no evidence of venomous dinosaurs, or that Dilophosaurus looked like that.

CSM: One of the greatest things about science is that it's always changing, based on new evidence. But it's hard for us to let go of our emotional ties to what we once knew to be true. I have friends who are still bummed that Pluto's no longer classified as a planet. It's still there, folks. It's always lived in the Kuipers belt! It hasn't gone away--just rebranded, if you will. Same thing with our modern view of the theropod dinosaurs. We now know that lots of them were covered in feathers, fuzz, or fluff.

BS: The director of "Jurassic Park 4" in a very short and curt tweet said "no feathers JP4." And mind you, this is about 20 years after paleontologists found some of the first feathery non-avian dinosaurs. I mean, we know now, birds are dinosaurs. Many of the traits that we think of as being bird traits, you know laying eggs, nesting behavior, air sacs in the skeleton, most of all feathers, evolved millions and millions and millions of years before amongst non-avian dinosaurs. I mean, even Tyrannosaurus rex itself, you know the king of the tyrant dinosaurs, was probably influffled to some degree. But chances are that we’re not going to see that in "Jurassic 4" because fans don’t like it, because people like me but maybe a little bit misguided, people who love their dinosaurs just so very much, want a naked tyrannosaurus. They can’t deal with the feathers.

CSM: How long do you think it'll take before our romantic vision of the dinosaurs catches up with modern science? I say bring it on! You may be surprised to find that when it comes to these incredible giants of a bygone era, truth is often stranger--and more fantastic--than fiction. So come on, talk nerdy to me!

Talk Nerdy To Me Dinosaurs Science Paleontology My Beloved Brontosaurus 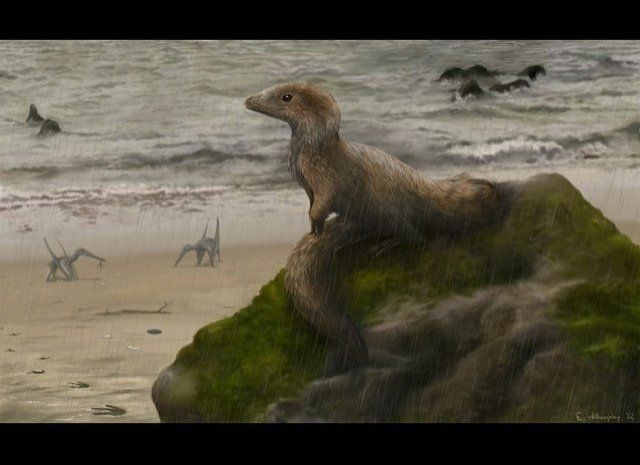 1 / 16
Cutest Dinosaur Ever?
A baby megalosauroid Sciurumimus is perched on a rock by the Bavarian Sea in Germany.
Emily Willoughby