As she stood near a skywalk leading into the Baltimore Convention Center, Holly Fawcett, a 43-year-old wife and mother from Yorktown, Va., watched as they all flooded past.

The men in pink tutus. The women wearing wings and unicorn horns. The teens from places as far away as Colorado and Connecticut, sporting horses' tails, carrying stuffed ponies and high-fiving as though they've known each other forever.

It was Day Two of BronyCon 2013, the "Bronies" were streaming in by the thousand, and Fawcett, in run-of-the-mill T-shirt and jeans, gazed in wonder.

"It seems fun, but I still don't quite get it," said Fawcett, who was, in fact, on hand to chaperon her colorfully attired daughters, Lilly and Grace Fawcett, at the event.

The "it" to which she refers, of course, is Bronyhood, a state of irrational fondness -- no matter one's age or demographic group -- for "My Little Pony: Friendship Is Magic," a hit animated TV series about a group of whimsically feisty ponies and the world they live in.

"MLP: FiM," as insiders call it, debuted on the Hub Network in 2010, and it has spawned enough in the way of online clubs, fantasy games, fan art and fiction, mass meet-ups and product sales to qualify as a bona fide cultural phenomenon.

It has also led to the birth of "BronyCons," annual nationwide conventions for fans of the show. (The word "brony" -- a blend of "brother" and "pony" -- was coined to describe the surprisingly large contingent of men who have come to love the program, though it has come to mean an enthusiast of any stripe.)

By Saturday morning, more than 7,000 people had crammed the downtown Convention Center for the three-day Brony bash, making it the best-attended of the three BronyCons held so far.

"Interest has exploded, and it seems to be growing fast," said Jade Aurora, one of the 300 staffers who helped organize and oversee the weekend's events, which included trivia games, group discussions on cartooning and writing, autograph sessions with several of the show's voice actors and a gathering of everyone who came dressed as Pinkie Pie, the insanely happy character who loves throwing parties and making her friends happy.

"Fun! Fun! Fun! Fun!" a group of Pinkies shouted late in the morning, their fists raised, as passers-by snapped their images and made videos.

As any true Brony knows, the chant comes from an episode in Season Three, "Too Many Pinkie Pies," in which the excitable character -- faced with choosing one friend to spend her time with -- clones herself, and they all begin singing together.

The Fawcett sisters were certainly having fun before they ever entered the main building.

Lilly, 17, was dressed as Princess Celestia the "alicorn" (a combination unicorn-pegasus) whose rule over the land of Equestria is kind and caring. Grace, 14, came as Princess Luna, Celestia's younger sister, who was once banished from Equestria for plotting to submerge it in permanent darkness.

Both wanted to be princesses, they said, but Lilly chose first.

"I'm the dark and creepy one, apparently," said Grace, whose twilight-blue wig, black wings and sequined blue unicorn horn did, indeed, have a haunting feel.

Several strangers approached the pair, bowing and scraping, and asked if they could take their photos.

"We haven't even gotten to the main hall yet, and I think we've been in a hundred pictures," Lilly said, laughing.

The sights and sounds on the Convention Center's four floors were as cheerfully zany as any of the show's adventures.

A 25-year-old man strode through the throng, a large replica of Rainbow Dash, one of the show's more hyperactive characters, across his shoulder.

The crowds parted to let him through, and it was as though "R-Dash" herself had appeared. "Awesome!" cried one Brony. "Holy cow!" hollered another. Camera flashes went off.

In a main hallway, a Brony dressed as Twilight Sparkle -- a bookish purple-and-blue unicorn and the show's central character -- posed for photos with three children and a grown man.

Even Fawcett, the Virginia mom, was beginning to catch the vibe. She watched as her daughters and their friend, Madeline Peirce of Crofton, who came as the changeling Princess Cadence, continued to greet Bronies they'd never met.

The girls, she said, have been telling her how good "My Little Pony" is. She hadn't had the time to check it out, but she figured that could change.

"I'm going to have to go home and watch this show," she said. 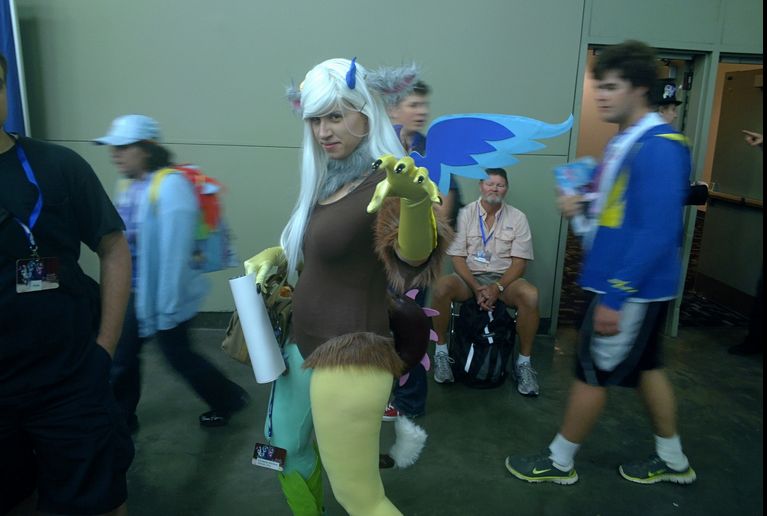