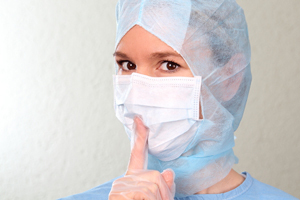 On May 3rd—the very same day that outsider Donald Trump became the presumptive Republican nominee—a breakthrough article was published in the BMJ, entitled "Medical error—the third leading cause of death in the US." Since "medical error" is not even listed as an official cause of death on International Classification of Disease (ICD) billing codes, and death certificate causes of death must cite ICD codes, this is a significant shakeup.

Traditionally, "medical error" has been defined as an unintended act (either of omission or commission) or one that does not achieve its intended outcome; the failure of a planned action to be completed as intended (an error of execution); the use of a wrong plan to achieve an aim (an error of planning); or a deviation from the process of care that may or may not cause harm to the patient.

The BMJ article notes that "The most commonly cited estimate of annual deaths from medical error in the US—a 1999 Institute of Medicine (IOM) report—is limited and outdated." Other reports suggest the IOM's figure of 44,000-98,000 such deaths annually was too low, and more recent studies have doubled that figure for just Medicare recipients.

The authors went through extensive analysis to reach their "understated" figure of 251,454 per year—using the studies reported since the 1999 IOM report and extrapolating to the total number of US hospital admissions in 2013. Thus, our bronze medal third place is based on heart disease (611,105 deaths per year) and cancer (584,881)—replacing respiratory disease (149,205) [all data for 2013].

BMJ Talk Medicine interviewed lead author Martin Makary, MD, of Johns Hopkins. He contrasts the omnipresent gag orders seen in medical malpractice settlements, with the much more open investigations of aviation deaths. Such investigations are shared with the entire industry, which learns from its mistakes! Consider that our 251,454 medical error death annual figure is more than 100 times the worldwide total of aviation deaths in the worst year on record (1972). What's wrong with this picture?

Makary avers grimly in the interview: "In healthcare, the same mistakes happen again and again, and many of them are never investigated." As Makary states in a letter to CDC director Thomas Frieden:

"Each year, the U.S. Agency for Healthcare Research and Quality receives thousands of project proposals aimed at reducing preventable harm, but very few ever get funded because funding work on the delivery of care has historically taken a back seat to funding new treatments. Our Johns Hopkins research team even submitted a grant proposal to reduce unnecessary cancer surgery to the National Cancer Institute, but it was rejected from the N.C.I. despite being funded by the prestigious Robert Wood Johnson Foundation. Based on the prevalence of the problem of poor quality medical care, the human suffering and price tag due to error are significant and merits proportional funding."

"Unfortunately, this news is not surprising at all. In the medical community, we have seen the consequences of inaccurate diagnoses and medical error for quite some time. While concrete efforts have been made to correct wrong site surgeries and other well publicized issues from the past, not enough has been done to address medical error that results from an incomplete or inaccurate diagnosis. 37% of the cases we review require a change in diagnosis, and over 75% of cases require a change in treatment plan."

"Clearly, diagnostic error often leads to medical error. A recent IOM report found that wrong or delayed diagnoses are a huge 'blind-spot' in U.S. healthcare and harm countless patients each year. The report also found that 'most people will experience at least one diagnostic error in their lifetime, sometimes with devastating consequences.' The right diagnosis and treatment must always be the first priority in healthcare, or we are missing the mark."